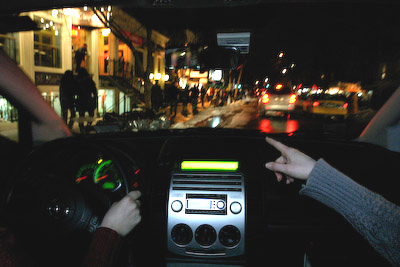 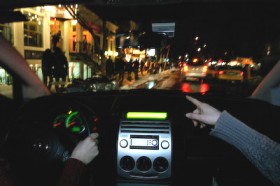 The view through the windshield of a Right Rides car.

Reid is the founder of Right Rides, a free car service for women and lesbian-gay-bisexual-transgender-queer individuals, which offers riders a safe trip home on the weekends–something she says should never be a luxury.

Approximately 200 volunteers, who Reid now oversees, run the program every Friday and Saturday night between 11:59pm and 3am. In its seven years of operation, the service has delivered over 5,000 riders home safely to the South Bronx, Manhattan, Queens and Brooklyn using cars donated by Zipcar. Volunteers dispatch calls to a Right Rides team, consisting of a driver and navigator, one of whom always identifies as female, to pick up the rider and deliver her home safely.

“[Right Rides] was in direct response to an increase in assaults targeting women walking home by themselves late at night in North Brooklyn neighborhoods,” said Reid, who herself is a survivor of sexual assault. The series of attacks that occurred in Williamsburg and Greenpoint in the summer of 2004 served as the catalyst for her cause. “At the time, I just felt like my neighborhood was being targeted, my community was being targeted,” Reid said. “I went from feeling safe to feeling incredibly unsafe, and my reaction and my response was to do something, to take action not just lock myself up in my apartment and be afraid. My response was Right Rides.”

Since March there have been 11 confirmed attacks–one rape and a variety of sexual assaults including women who were forcibly groped–in the South Slope, Sunset Park and Windsor Terrace areas. The police have released several sketches based on victims’ descriptions of their attacker, and it remains unclear exactly how all the assaults are related and whether they are the work of an individual, a group, or several unrelated individuals. Meanwhile, the neighborhood has become increasingly alarmed about nighttime street safety.

For Reid, who has spent the past seven years advocating against gender-based crimes in Brooklyn, the attacks have had a particular affect. “I’m a resident of the Greenwood-Heights neighborhood now,” Reid said. “I’ve lived here for about three years, so I am well aware of what’s going on. Right Rides has seen an increase in calls to these neighborhoods, but one of the more amazing things is that some of our volunteers are organizing Safe Slope.”

As its name implies, Safe Slope is a grass-roots safety initiative started in response to the serial attacks, the most recent report of which occurred September 21, South Slope. We’re “hoping to send the community a message of empowerment and that we can be proactive instead of reactive,” explained Liza Trinkle, a member and organizer, in an email. “We noticed that many people did not have much information about the attacks in the neighborhood or knowledge about the resources in the community.” Safe Slopes’ main focus is on organizing volunteers into two initiatives: Safe Walk and Safe Space.

They also organized a rally and march held on September 14. Hundreds of local residents gathered at the R train stop on Fourth Avenue–the site of at least one of the attacks–and marched to Detective Joseph Mayrose Park, at 17th Street between Sixth and Seventh Avenues to rally together.

Safe Walk plans to pair women and LGBTQ individuals with a volunteer who will see her some safely, while Safe Space plans to “partner with local establishments willing to create and maintain a space for community members to briefly retreat to at night to feel safe.” Safe spaces will be identifiable by decals in their front windows. Safe Walk is slated to begin tonight, September 29, and Trinkle says that the organization hopes to launch Safe Space soon as well. To arrange a Safe Walk, call 347-709-8852, and a pair of Safe Slope volunteers will meet you in the neighborhood and will walk you anywhere in the zone bordered by 9th and 30th Streets and Second and Eighth Avenues. 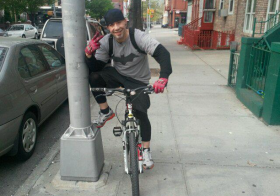 Brooklyn Bike Patrol is a second new safety service that has sprung up in the wake of the attacks. Its founder, Jay Ruiz, with the help volunteers, fields calls and emails from women who want a buddy to walk them home. The bike patrol operates every day of the week. Anyone who needs an accompanied walk home can call or email Sunday through Thursday 7:30pm to 11pm and Friday and Saturday from 8pm to 1am to arrange a meet-up. Contact BBP by phone, 718-744-7592, or email, rocket55j@aol.com.

Reid, Trinkle and Ruiz all say that community members have responded positively to their initiatives, including Jeremy Laufer, the district manager of Community Board 7, which encompasses the Sunset Park, Windsor Terrace, Greenwood Heights and South Park Slope neighborhoods where many of these attacks are occurring.

As such, Laufer and has staff are spearheading the local governmental response to the situation and the communities’ response. “It’s good that neighbors are looking out for each other and looking to take care of each other,” Laufer said. “Last [Wednesday night, September 21] was our board meeting where this was a big topic of discussion. I actually met with two student journalists afterward and I drove them to the Prospect Avenue station. This was about a half-hour after that [latest] attack, and I didn’t realize at the time. It’s something that’s very personal for our board.”

Contact Safe Slope or Brooklyn Bike Patrol directly, if you wish to volunteer. The Slope-based Center for Anti-Violence Education has also been offering free and sliding-scale self-defense classes for women, teens and transpeople.