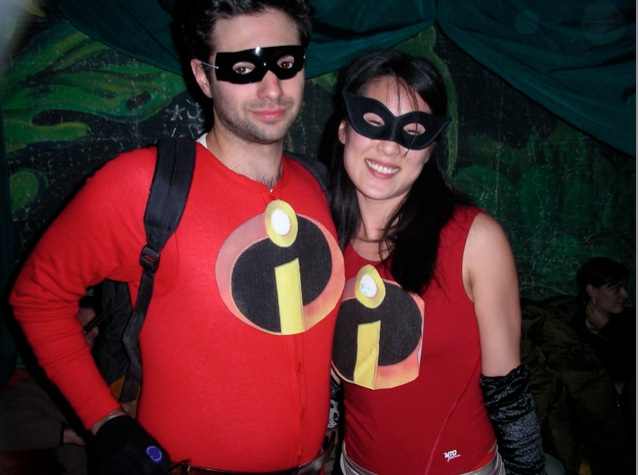 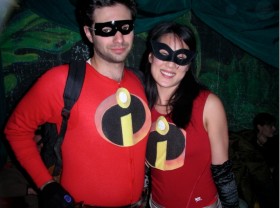 Jeanie Baik and Damon Maulucci love to tell people they met at the library. Actually, it was the Library Bar on Avenue A.

That was eight years ago. Now, the couple owns a home together in Ditmas Park, as well as a DIY sensibility evident in their homemade Halloween costumes in the picture above. “It was a few years ago when The Incredibles first came out,” Jeanie explains. “We call this photo the Incrediboos. And it has since spurred other boo-words like unforgetta-boo, boo-ritos, boo-tiful, rendez-boo–all stuff that might make other people throw up in their mouths.”

Jeanie said that that she first thought that Damon might be “the one” on their first road trip together, driving from New York to New Orleans. The dynamic duo, both 33, camped in the Smoky Mountains, visited Graceland, wound their way through Mississippi and then stayed in hostels in New Orleans.

Jeanie also said that Damon’s habit of making her breakfast and then walking her to the train in morning pretty much sealed the deal, from her perspective. “Without Damon, I’d probably still be eating cereal three times a day and eating pasta out of pot just to avoid doing another dish,” she says. “Even today, eight years into our relationship, he worries whether I’ve eaten a hot meal and makes lunch for me to take to work.”

She compares their personalities to those of George and Wheezy Jefferson, (you know the couple from The Jeffersons who were “moving on up, to the Eastside, to a deluxe apartment int he sky”). “He likes to make a lot noise, strut around and show his feathers,” she says. “I am the sassy but down-to-earth matriarch who really runs the business.”

Damon popped the question two years ago and the couple is considering next steps.