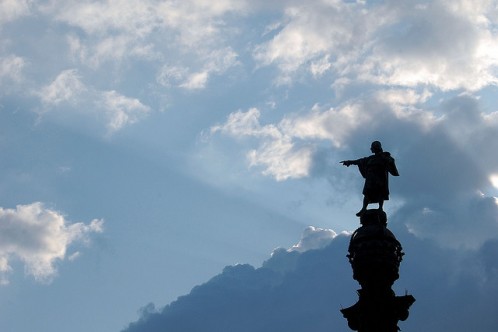 We received many excellent submissions for our first-ever BB Essay contest, Journeys, but Helena Fitzgerald’s “Here There Be Monsters” was the one that best evoked the electrifying sense of discovery when visiting an unfamiliar place. In her essay the reader witnesses the delights and quirks of Barcelona alongside her, while meditating on the transformative power of travel in a post-Google Earth world. We’re excited to publish her lovely piece, and reward Fitzgerald with the contest’s prize–a $100 gift certificate from Greenlight Bookstore. To enter our next essay contest, find out the details here.

At the Maritime Museum in Barcelona, there are maps from the sixteenth, fifteenth and fourteenth centuries behind glass. The one from the fourteenth century is far less map than illustration, less fact than hysteria. Were it a piece of prose, it would consist almost entirely of adjectives. A few scrawled lines promise land but laughably fast the picture reaches the other horizon, the paper curling from age as if time chewed gently at its edges. Near these dissolving paper-borders, a well-known warning is emblazoned: HERE THERE BE MONSTERS.

A bug-eyed dragon peers over the edge of an animated wave, looking more curious than threatening. Supposedly the famous text is a warning, yet somehow, tucked under glass, it reads more like an advertisement. Come here, it says. “Here there be monsters.”

Cerbere is the last train stop between France and Spain, some 90 miles outside of Barcelona, in the mountains along the Costa Brava, where the view cuts fast and easy right down to the water. On the last day of October, my train sat waiting in the late afternoon of a quickly melting day. I looked out the window, craning my neck down the reckless coastline, imagining how summer here must be, sand-stained and beach-stoned, full of orange lipstick and plastic chairs. Below me retirement bungalows and high-rise hotels reached to conquer the view. They gave up at ten stories or so and took the rest of the day, month, year off for a long nap.

I was going to Barcelona on a whim, for no better reason than that I wanted to get myself profoundly lost. The truth was I had nothing better to do—at least nothing more compelling. I’d been in Switzerland for work and my project had been unexpectedly delayed. I found myself with two months free. I could (and probably should) have gone home to New York. I was in a cab on my way to the train station in Geneva and my driver asked me where I was going. I had planned to say the United States. Instead I found myself answering, “Where would you recommend?” After an incredulous pause the driver said his wife’s family was from Spain. My experience of Spain was limited to a forty-eight hour trip I’d taken there years before. Almost the sum total of what I remembered was that map: the dragon, hopeful and childlike; the text bending an index finger and beckoning me to lean in, sail closer, and careen right off the edge. This was exactly what I was after, I realized. I went into the train station and bought a ticket to Barcelona. I’d never found myself so interesting as at that moment. I felt heroic, and, for a second, just about anything seemed possible.

My train plunged out of Estación de Francia and Barcelona reeled past my window, all palm trees and neon lights in the warm darkness. I didn’t know a single person in the city. I’d rented an apartment over the Internet. I had a name and address written on a piece of paper. I showed the piece of paper to a cab driver and we whirled past black, empty monuments toward a more populated center. The streets were slick and promised the best party in the world just out of sight. The cab dropped me off on a crooked dark street a block off Las Ramblas. I started walking almost hopelessly until a woman emerged from a large, previously invisible doorway in a graffiti-ed wall. I said her name as she said mine, and she opened up a yellow square of light onto the street.

Inside, a dilapidated marble lobby sprawled to an expansive, crumbling staircase. The place looked staged in its half-ruin. Marble stairs and rubbed-gilt banisters set off holes in the plaster walls, and shadowy doors closed their eyes against the light. The interior was a spacious hollowed-out carcass, its eerie silence comforting. I exhaled. “This is wonderful,” I said, and meant it. “I’m sorry about the stairs,” she said, as we carried my suitcases up six flights.

I was out of breath when she finally put an ancient key in a heavy lock. The door sprung open, revealing a white-walled, high-ceilinged kitchen. As my host threw open a pair of French doors, my face turned into a round, undignified O. Beyond the doors was the statue of Columbus that stands high above the harbor, the sea, the entire city. Beyond was Barcelona, strung up in lights, static as a painting, the ocean making a smug blue noise in the darkness.

If New York is the city that never sleeps, Barcelona is the city that never goes to work. It rises, naps, makes dinner, and lingers over vats of paella and pinxtos, until going out to party around 3am. Then, all at once, between three and four in the morning Barcelona has something—everything—to say. By 8am after-parties finally give way to long exhausted walks home, and slow final drinks. In the pale morning people still call for “Mas cervezas!,” determinedly awake in little cafes facing the street. From nine until noon there is an easy silence as the city goes to bed in the sleepy hours just before afternoon arrives once again. I stayed in my apartment for most of these fast-paced, immediate nights, but I didn’t sleep.

Instead, I watched, charting the city’s progress from afternoon to the vivid, noisy hours of the morning and back to afternoon again. At 7pm half the lights would go off when the Gaudí Museum on Montjuïc closed. The fortress lights on the same hill stayed on, singing history into the darkness. In my apartment, the city and I lay in bed and told stories. The lit-up mountains through my window resembled a painting pinned to wall. I listened to the partygoers coming home, more tired than drunk, watery laughter echoing down the dirty little streets in Barrio Gotico. I was rarely one of them, but I rarely ached to be. The proximity was enough, this foreign timetable swept me up, making me a participant, even as I stood back from it.

Outside, Columbus reared up into the perfect dead center of my view–Columbus, Spain’s ultimate explorer, her fearless seeker. All day, I watched as tiny little funicular cars ran precariously up the side of Montjuïc and carried tourists across the ocean view and back to the safety of the beach, passing literally under his nose as though for inspection. At night he beamed ghostly orange out of the darkness. In theory, I was in Barcelona as a fellow adventurer. I wanted his approval—his reassurance that, in my own small way, I was creating a new map, chasing the monsters toward the edges of the page. But in our endless staring contest, I always blinked first. When I went inside through the rickety white French doors he taunted me for retreating, for choosing again the easy, known world of my apartment.

One long afternoon, while the city’s natives slept, I went back to the Maritime Museum. The maps were just as I’d left them years before, but this time they stirred little more than nostalgia in me. I walked out of the museum. A few tributary palm trees watched over a traffic roundabout. Crossing the street toward the harbor, murderous, holiday-seeking cars grazed my shoes. Sailboats bobbed in the shallow, nearby water; I could have put my hand out to steady myself on them. Beyond them, yachts turned self-satisfied profiles against the sky, and further beyond, cruise ships and stained metal container vessels stood, like severed parts of the sky. Hidden in the clamor I found a pier, and walked out as far as it would take me. The ocean roared silence. Ships spoke of dangerous, less accessible continents, and storms around capes and compasses, things lost from the world and its daily, tethered ritual.

Sitting there, near a colorful sign offering Tourist Boat Tours, it struck me that the unknown we encounter is no longer the world on the map. The Barcelona of today is well-charted territory—new but not novel, unknown but not strange. Perhaps if I had truly rushed into the city headfirst, if I had spent every night awake, calling for “Mas cerveza” until eight in the morning, and every afternoon crashed into a hung over sleep—if I had mined the city for its corners, its secrets, its dangers—I would have found the kind of deep, transforming novelty that Columbus’ journals depict.

But perhaps there are other ways to be transformed: watching the city like a painting, becoming uncharacteristically silent within one’s self, removing day-to-day distractions. In stillness I was able to experience not just a strange city, but a place where I could be unknown to myself, free to confront a surprising, unexpected answer, or a possible blank.

I got up, went home, and shut the balcony doors.

Helena Fitzgerald is a contributing editor to The New Inquiry, writes regularly for The Rumpus and Bookslut, and has published fiction and non-fiction with The Brooklyn Rail, the Notre Dame Review, and Soon Quarterly, among others. She lives in Brooklyn mostly, when not finding excuses to travel anywhere and everywhere.