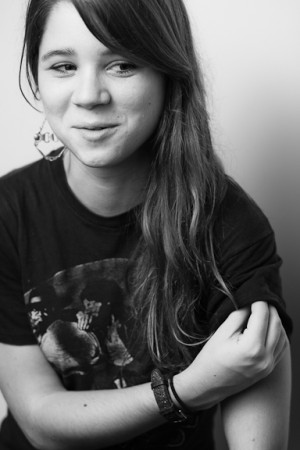 Every month or so, Brooklyn Based unveils an exclusive song by a Brooklyn band, recorded at Nadim Issa’s state-of-the-art recording studio in Gowanus, Let ’Em In Music. Then, Laura Leebove of the music-inspired food blog Eating the Beats creates a recipe with — or inspired by — the featured artist. This month’s mp3 is Lady Lamb the Beekeeper performing Cher’s Phil Spector-produced cover of Bob Dylan’s “All I Really Want To Do” and the recipe is baked apple and coleslaw sandwiches made with Aly Spaltro, aka Lady Lamb. We’re also premiering Spaltro’s video for the song, filmed on the G train.

Some of Aly Spaltro’s earliest memories involve sitting in her closet with a flashlight, waiting for her favorite ‘60s girl-group songs to come on the radio so she could record them to a cassette tape. The 22-year-old Spaltro, who performs as Lady Lamb the Beekeeper, doesn’t think that era has had a conscious effect on her own songwriting, but she says it was “the music of my childhood, my favorite music of all time.” So it’s perhaps not a surprise that for BB Songs she decided to record Cher’s jangly Phil Spector-produced cover of Bob Dylan’s “All I Really Want To Do,” from her 1965 album of the same name.

“This recording is so fun,” she says. “The way it’s produced feels like everyone’s in a room playing it live, the production is so warm.” With friends in the groups Milkman’s Union and the Age of Rockets as her backing band, Spaltro stayed true to Cher’s version of the song. Spector was known for his production work, especially with harmony-driven girl groups, and the art of recording is what inspired Spaltro to make music after graduating high school in Brunswick, Maine, four years ago. Spaltro is recording and producing the first formal Lady Lamb LP — which follows last year’s ragtag collection, Mammoth Swoon — all herself, out of her Greenpoint apartment. “I started making music to record it,” she says. “That’s my real love, and so I’m very stubborn about how it’s recorded.”

The songs on Mammoth Swoon — largely demos, which Spaltro released as something to sell at her going-away show before leaving Maine for Brooklyn last winter — were recorded in various locales, including her bedroom in Portland and late at night in the basement of her former workplace, an independent DVD rental store. The tracks are stripped down, often using only an electric guitar, occasionally a banjo or ukulele. Spaltro’s voice is rough, passionate and versatile: It turns into a twangy howl in “Aubergine,” a more smoothed-out croon in the eerie “Between Two Trees,” and a soulful warble in “Apple.”

When I saw Lady Lamb perform at The Rock Shop early this year, she made a comment about not bringing her acoustic guitar anywhere because she’ll be pigeonholed as an adorable female folksinger/songwriter who won’t be taken seriously. “Even if I played acoustic guitar for one song and then I played all this loud, distorted electric stuff, the review written was like, ‘Lady Lamb is so adorable! She’s like 5’2” and she plays folk songs that are really sweet,’” she says. “And it just didn’t sit well with me, you know?” Spaltro says that, especially as a female musician, it’s important to acknowledge your predecessors and know who you’ll be compared to, then carve out a space for yourself that doesn’t fit what’s already been done. She cites St. Vincent’s Annie Clark and Tune-Yards’ Merrill Garbus as artists who are surprising, inspiring and unclassifiable because they’re simply being themselves, which is what Spaltro strives to do, too. “I write music the way I write it,” she says. “I am who I am and I’m comfortable with who I am and I write about what I know and I write the way I write.”