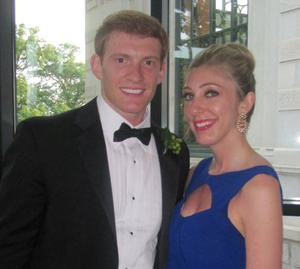 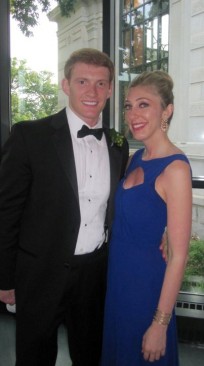 Katie Foley and Mike Ioanilli first met in college at Syracuse University, but it wasn’t until 2007, at a Hot Tub Time Machine-like, 80s-themed ski weekend organized by a mutual friend that they felt the spark of romance. Blame it on the Journey soundtrack. They both left the weekend thinking about the other and then met at a Manhattan bar a few weeks later. They’ve been a couple ever since.

“We both knew almost immediately that this was for the long haul,” says Katie.

Now the pair lives in Williamsburg, where Katie has resided for about six years. When she moved to the neighborhood right after college she had no idea hers would become such an enviable address, she was just in it for cheap rent and convenience. Mike lived in Murray Hill for a few years before moving to Brooklyn, a period of his New York life he’d prefer not to talk too much about.

Though they said that they had considered lying and claiming to have more locale-typical jobs like artist and musician, Katie, 28 works in corporate public relations and Mike, 30, works in the corporate offices of National Grid. Katie loves to cook and once placed second in an apple cooking contest at The Brooklyn Kitchen. Mike’s culinary specialty is grilled cheese, but enjoys Katie’s cooking very much.

They both love dining out around Brooklyn, as well as taking advantage of the borough’s robust bar scene. And, they love to travel together. “Our last trip was to Ireland and we’re headed to Argentina and Brazil in November,” says Katie.

When it comes to finding their TV-couple soulmates, they compare themselves to Frank Lambert and Carol Foster from Step by Step (Have not thought of this show in years–sweet! -ed.) because Katie is blond and loves to laugh and Mike is buff and likes skinny jeans.

When it came time to pop the question, Mike planned out a total surprise for Katie, on a date neither of them would be likely to forget. He requested a Brooklyn Bridge Park picnic lunch for his 30th birthday. Katie packed up a spread of Murray’s cheeses and a few of Mike’s favorite treats and they enjoyed a beautiful Saturday at the park. Following lunch, Mike told Katie how much he appreciated her and reminisced about one of their first dates walking across the Brooklyn Bridge. She thought he was just getting sentimental because of the birthday milestone–until he dropped a knee that is.

Katie and Mike plan to marry next summer, June, 2012 at Cayuga Lake in upstate New York.