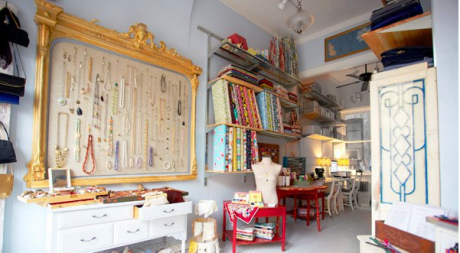 If you’ve ever loved a dress that fell apart after a single summer, held onto a too-long or too-small skirt in the hopes that it would magically fix itself in your closet, or imagined an outfit you’re dying to rock but don’t know how to make yourself, we’ve found four seamstresses who can recreate your favorite outfit or sew one from scratch. Nearly all of the women below will make house calls, even for simple alterations–one will even make alterations in a bar.

You can call on these ladies for something as simple as a button replacement or hem job, (or consult our guide to tailors), but those tasks barely scratch the surface of what they’re capable of. These seamstresses will all design and sew custom work, although that comes at a heftier price than simple repairs. For an idea of custom rates, we asked each to give their pricing for an A-line skirt, and the range was between $80 and $150. That’s not including fabric, which is typically between $12 and $25 per yard, with three yards being the average amount needed for a garment, more for long dresses or other larger pieces. (Mood Fabrics and Fabrics Garden in the Garment District are two sources recommended by our seamstresses.) So while you can’t expect to pay Forever 21 prices, your custom-made outfit may actually last that long.

The Williamsburg Seamster, Nayantara Banerjee, is a traveling seamstress who always goes to her clients’ apartments or workspaces for fittings and drop-offs. She covers areas in North Brooklyn, parts of Bushwick, the East Village and Soho, and works out of a studio space crammed with sewing machines in her apartment on the Williamsburg/Greenpoint border.

Rates: Custom-made garments are based on a $30-an-hour rate, and for most items this equals roughly $300 (excluding fabric). Banerjee’s custom work has included men’s shirts, a replacement zip in fleece-lined vest for motorcycle jacket, dresses, leggings, and even a copy of this dress that Jeff Bridges is wearing in The Door In The Floor for a client who was obsessed with the movie. Wedding dresses can also be custom made, but generally cost much more than $300.

Client Testimonial: Virginia Poundstone had her wedding dress designed and created by Banerjee from scratch and recommends her services without hesitation, describing the seamstress as being with her “every step of the way.” With a pile of clothing to take to Banerjee now that the wedding is over, Poundstone also praised the pricing. “Most of the other tailors/seamstresses I talked to charged at least $20 more an hour and they all told me what I wanted was impossible within the time frame,” she said.

Extras: Banerjee can assist with fabric shopping (often making trips to the garment district with clients) and research and design for an extra charge. She can also do vintage reconstructions and pattern-making, and offers fashion show/trunk show alterations and assistance.

Sew Moni offers more than just seamstress services. The family-owned sewing and crafts company, originally based out of Corpus Christi, Texas, began with tote bags and aprons designed by Moni Briones and her mother. Since then, the company has moved to New York and now offers sewn goods, fabric, sewing classes, original sewing patterns, vintage items, and alterations including their brand-new happy hour drop-off mending at local bars. Their first session is at Sycamore in Ditmas Park, next Monday, Nov. 7,  from 4pm to 8pm, where you can drop off items in need of a hem or button, and pick up them at the bar later in the week.

Rates: To create items using patterns or a sample, like an existing garment, the cost is $40 an hour, and for pattern making for custom garments it’s $65 an hour.

Client Testimonial: Justin Killingsworth called on Sew Moni to sew a messenger bag for his wife’s birthday. His wife knew Briones from Texas and he really wanted to surprise her with a custom Sew Moni design. They were able to design and sew the messenger bag in just a few days and had it shipped overnight to arrive in time. Killingsworth followed up to tell them, “You just made my wife’s birthday.”

Extras: Sew Moni can source fabric for customers–Briones has a penchant for bright, eye-catching patterns you won’t find in many places–and they also book in-house calls for custom work (not alterations) on Saturday afternoons from noon to 3pm. In the past, Sew Moni has served Park Slope, Fort Greene, Cobble Hill, Brooklyn Heights, Greenpoint, Bushwick, and Ridgewood and they are currently looking to expand to other neighborhoods as well. Sew Moni also offers many sewing classes and sells fabric at their Ridgewood, Queens store, at 464 Woodward Ave.

Leslie Swanson, a graduate from the The Illinois Institute of Art, can pretty much do anything sewing related, from formal wear to on-the-spot alterations. Depending on the type of work, she can make house calls in much of Brooklyn and Manhattan for an extra $25 and has a studio in Greenpoint/Williamsburg, where she does fittings and consultations.

Rates: For restyling clothes or creating a new dress based on the pattern of an older one, Swanson charges $100 an hour (but if the work is simple, it may only take her an hour). For custom-made formal wear, expect to pay $300 (total, plus fabric) and up.

Client Testimonial: Pamela Castillo had a dress custom-made by Leslie for her brother’s wedding. As a fashion-stylist and co-founder of Market Publique, Castillo confesses she is very picky about style, fabric and finishing. “We went to Mood Fabrics together to pick a printed silk and she was able to make me a gown inspired by Rachel McAdams’ 2010 Oscar gown.” Castillo said. “She fit me a few times and the dress turned out amazing.”

Extras: Swanson is able to assist with sourcing fabric and trims, make patterns from existing pieces or from a designer’s technical sketches, sew samples and offers restyling services. 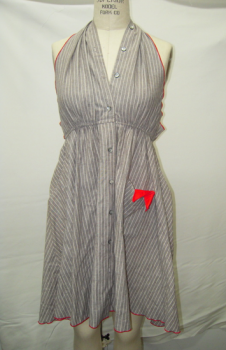 Laren LeBlanc got her start as a summer intern for a New York designer named Zaldy, who was then working for clients like RuPaul. She stayed in touch and has since helped create costumes for pop stars on tour, like Britney and Rihanna. Closer to her Park Slope home, she restyles outdated clothes at the vintage shop Odd Twin on 5th Avenue and does custom work for individual clients.

Rates: LeBlanc charges $30 an hour to create garments from existing pieces or custom clothing such as fully lined shift dresses and matching long coats. She can work from a sketch or pictures, too.

Client Testimonial: Nicole Hoist, frontwoman for a vintage pop band called Billi Shakes and the Phakespeare Orchestra, first discovered LeBlanc through Odd Twin. “I explained to her I was trying to develop a new look that mixed 1920s burlesque with a modern, punk hip-hop style,” she said. “Laren disappeared for a week and when she re-emerged she blew my mind with her work.” A year later Hoist is still enthralled with LeBlanc’s style and craftsmanship. “Her pieces have withstood thrashing, sweat-drenched shows, rapid costume changes, and tons of traveling from venue to venue.”

Extras: Typically LeBlanc makes costumes and does custom work but she can do alterations, pattern making, house calls (with a $50 consultation fee), and give sewing lessons as well.