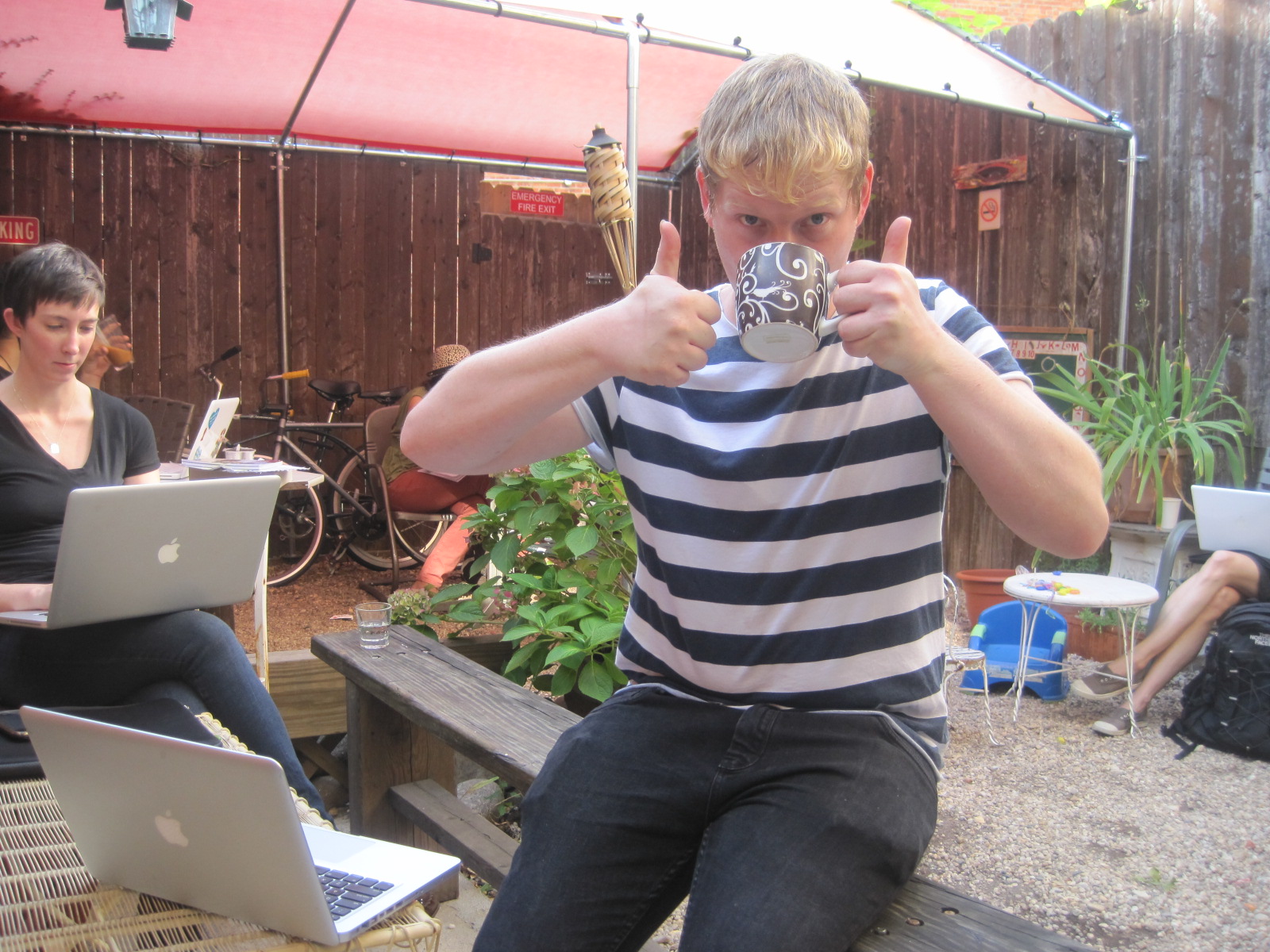 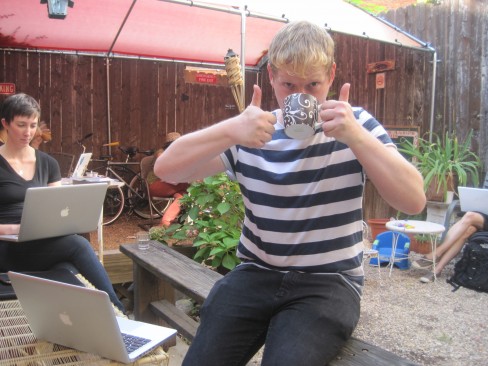 The author in the backyard at Sit and Wonder in Prospect Heights.

The response to last year’s coffices article was overwhelming. Many media outlets took the idea and ran with  it, sussing out coffice etiquette along the way. How much should you spend per hour? ($3) How many hours is too many? (12) Is it okay to bring your kid to a coffice? (No.) What about your dog? (Sure.) Is cofficing an inherently offensive behavior? (No way!)

There’s even an urban dictionary entry for coffices now.

Throughout Brooklyn, cafés with free wifi, outlets and comfy workspaces continue to pop up. While some Brooklynites protest the very notion of coffices, the majority of Brooklyn freelancers, artists, writers and philosophers remain highly appreciative of nomadic work spaces. Walk into your local coffice and look at the people sitting with their work and their laptops. Perhaps you see stragglers, but we see Brooklyn’s dynamic freelance culture (and often enough, ourselves).

Above all, the main response to Coffices I was a desire for more reviews. We’ve included five of writer Jon Reiss’ top picks in today’s email, but on Brooklyn Based we have many, many, many more coffices, organized geographically by North Brooklyn (Greenpoint, Williamsburg and Bushwick), Mid-Brooklyn (Bed-Stuy, Clinton Hill, Fort Greene, Prospect Heights, Crown Heights) and South Brooklyn (the Slope, Red Hook, Carroll Gardens–everything south of Atlantic Avenue).

Outpost Café, 1014 Fulton Street
Layout/Aesthetic: 5
Outpost is perhaps the perfect combination of warmth and functionality. The tri-level, outdoor seating area is relaxed and beautifully decorated with vegetation, a deck and a wooden entranceway made of tree branches. It feels either like an enchanted forest where Ewoks live, or like the terrain of the final Planet of the Apes movie where the humans and the apes battle for control. Best of all, it’s the first outdoor seating area I’ve found that provides outlets! Inside, DJ tables, local art and varied seating make for perfect place to sit and work on rainy days.
Vibe: 5
I made a few requests of the staff including a request for water, and they were especially kind and patient with each one. Outpost really feels like it was built to be the perfect coffice.
Coffee: 4.5
Outpost brews Dean’s Beans, definitely a new contender in the race for best beans. Dean’s is similar to La Colombe body and acidity-wise but its flavor is far more interesting than La Colombe. This is one of my favorite coffees.
Wifi: 3.5
What a bummer! Outpost’s internet is its one weakness without a doubt, but it’s worth mentioning that for a weakness, it’s decent wifi–2.3 on Speedtest is just slightly less than what one needs for a fast reliable internet work. But, it seems that the café’s router has to be reset often. However, since the staff is friendly, asking them to reset the router isn’t such a big deal.
Plugs: 4.5
They’ve got outdoor plugs! Inside is also quite well covered. The tables that aren’t close to outlets are few and far between.
+1 For all kinds of cake and creative coffee drinks.
Total: 23.5
Outpost might be the winner of best coffice. It’s got everything you could want with a slight weakness in the wifi department. 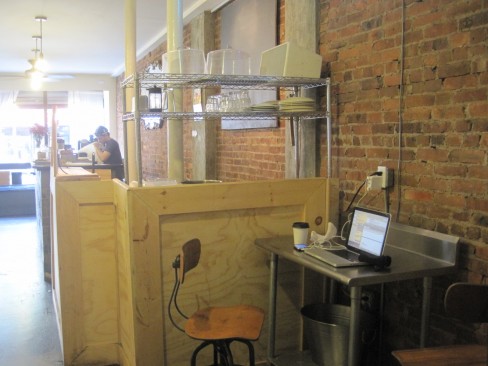 Breukelen Coffee House, 764 Franklin Avenue
Layout/Aesthetic: 5
After visiting nearly every coffee shop in Brooklyn, it’s hard to be surprised when it comes to ambiance, but Breukelen Coffee Shop surprised me. With a front room dedicated mostly to coffee ordering and making, and an entire back room for workers with a community table surrounded by personal tables, brick walls and nothing else, the space makes for a surprisingly minimalist coffice mecca with an industrial vibe. Vibe: 5
The ultra-friendly Seattle-transplant working the espresso machine simply asked me why I was taking pictures and conversation ensued. In the back room, people study hard–the music is turned down and silence reigns. This is by far one of the best places to get work done in Brooklyn.
Coffee: 4
Even after walking all the way here, I nearly skipped Breukelen when I saw the Stumptown sign in the window, but I soldiered on, ordered my coffee and sipped. Breukelen Coffee House brews the best Stumptown, outside Stumptown itself that I’ve tasted and the organic milk, while not a necessity, certainly doesn’t hurt.
Wifi: 5
Breukelen has Optimum Online and clocked 20.5 mpbs on Speedtest. All hail Breukelen.
Plugs: 4.5
The outlets are set up so that almost anyone sitting at the long community table can plug in, as well as anyone at the smaller tables.
Total: 23.5
I had a feeling a soon as I walked in that this would be among the winners. If you live close, go here. If you’re visiting, go here. Breukelen Coffee House might be the coffice king.

Goodbye Blue Monday, 1087 Broadway
Layout/Aesthetic: 5
For my money, GBM is one of the coolest venues in the city period, but you wouldn’t assume it’s a coffice at first glance. Based pure on ambiance, it’s perfect. You pretty much have to see it to believe it. Gorillas, Virgin Marys, rocking horses and a big rainbow umbrella are just a sampling of the kooky decor. Ambiance-wise GBM is kind of like the Shopsin’s of coffices.
Vibe: 4
There’s two reasons why GBM didn’t get a perfect score in this category. The music is loud, yes, but when I walked in they were playing old Oi! bands like The Oppressed, so I simply cannot dock them for that. The punk rock girl at the bar was genuinely friendly, and seemed to be happy to have me sitting there. So, there’s still the two issues: light and time. GBM is dark all the time, so unless you sit by the door, it’s a bit hard to read, and they don’t open till 11am.
Coffee: 4
There’s no espresso, but GBM brews Gilley’s in a no-nonsense straight-forward coffee machine. Since Gilley’s are some of the best beans, the result is great coffee.
Wifi: 4
The wifi hit 4mbps, which is about double what one should need.
Plugs: 3.5
There are three power strips, which is enough for most people to plug in and since it’s not very busy during the afternoon, there’s almost no reason why you shouldn’t be able to snag an outlet.
+1 for full menu including buffalo wings.
Total: 21.5
Goodbye Blue Monday is not what you’d expect from a coffice, but if the right tweaks were made, it could be one of the best in Brooklyn. As it is, it’s the best in the neighborhood.

Baked, 359 Van Brunt Street
Layout/Aesthetic: 4.5
Red Hook has me smitten. Baked is minimal in its décor, but effective. The orange on wood color scheme is fun and unique. The booths are comfortable and perfect for sitting and working. Though Baked is primarily a bakery, it functions perfectly as a coffice and is definitely among the best I’ve been to.
Vibe: 4.5
This is one of those places that actually seems to encourage customers who want to sit and work. Somehow, the deliciousness that seeps from every pore of this place adds to the vibe. Also, when I walk into a place where I intend to spend some time and there’s a stack of magazines that include Entertainment Weekly and GQ, and Louder Than Bombs is playing on the sound system, it warms my heart.
Coffee: 4
So, we meet again Stumptown. Baked offers a choice of two different Stumptown roasts, one of which, the Hairbender has none of the cloying, sour taste that tends to ruin most Stumptown coffee.
Wifi: 4
To be clear, anything above 10mbps on Speedtest gets a 4.5, and Baked hit 17 mbps on download, which puts it among the fastest cafés for wifi. Oddly, Baked’s internet also has a incredibly fast upload speed, which usually doesn’t matter very much, but there’s circumstances under which such a fast upload could come in handy. In short, this is one of the best places for wifi in Brooklyn.
Plugs: 4.5
Nearly every single little booth has an outlet, save for maybe one. I’m very impressed.
+1.5 For their incredible treats, Baked deserves the coveted extra .5. Don’t leave Baked without buying a salted caramel bar.
Total: 23
This is without a doubt one of the top three coffices in Brooklyn.

Postmark Cafe, 326 6th Street
Layout/Aesthetic: 3.5
Postmark is simple and straightforward in appearance. Half the room is exposed brick and besides a corkboard covered in postcards, the walls are pretty much bare.
Vibe: 4
Postmark doesn’t bowl me over with its coolness, but that’s not really what a good coffice does. The café is understated, which gives it a relaxed feel that surpasses most other coffices. You can tell that this is a place people rely upon and I think if I were a Park Slope resident, this would be my coffee shop of choice.
Coffee: 4
This is the first coffice I’ve been to that brews Puerto Rico Coffee Co. While the espresso seemed a bit underwhelming, the drip coffee was near perfect. Also helping the score here is the affordability factor, this is some of the best cheap-yet-good coffee in Brooklyn.
Wifi: 4
Postmark is one of the titans of fast wifi coffices. On Speedtest, Postmark clocked 7mbps and it’s unrestricted and that’s with a full house of people sucking down wifi alongside their lattes.
Plugs: 4
Postmark is well covered with big block outlets. This place could be full with pretty much every patron plugged in. Good show.
+.5 for some baked goods
Total: 20
Postmark is definitely the best coffice in this section of Park Slope, and what it lacks in flash it makes up for in functionality.