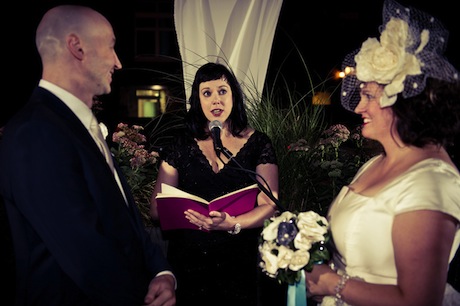 How do you get your friend to legally marry you? We asked Carey Bertolet, who officiated Lee Ann Westover & Steve Siegel‘s wedding.

I became a registered officiant this summer, just days before New York started certifying the marriages of same sex couples. I remember how I felt looking down at my very newly signed officiant certificate in the cab leaving downtown. New York is having a marriage renaissance, and now I could take part.

This wasn’t my first time as a wedding officiant. In 2005, I became ordained through the Universal Life Church in Modesto, California so that I could perform a wedding ceremony on a vineyard in Sonoma. Thanks to the internet and a couple of dollars, I was a Reverend in a matter of minutes. In California, I performed my first ceremony and certified my first marriage–legally because I had been ordained. I had always heard, however, that New York City’s requirements for wedding officiants were far more difficult. My understanding was that there was a pre-approved list floating around the marriage bureau…and only a few “real” ministers, priests and rabbis could help New Yorkers tie the knot. I assumed that my online ordination wouldn’t pass muster at City Hall, and for years I didn’t try.

When my friend Lee Ann asked me to preside over her wedding, I declined. “You need a real officiant,” I told her. The question nagged at me though, so I decided to test my own assumptions, and found that with a little hoop jumping, my 2005 ordination just might be enough to get my name on the list of those lucky enough to be registered in New York. By a stroke of luck, the church that ordained me five years ago is recognized here in New York, and they are fastidious record keepers. They keep the appropriate paperwork and by-laws to satisfy New York’s relatively strict requirements. In a matter of days, my church mailed me a thick envelope with my credentials and theirs, and I was on my way to City Hall.

The process is relatively easy–all it took was a manilla folder of official-looking documents and 15 dollars. I would even have called it unceremonious were it not for the cartoonishly large registration book they flop in front of you and ask you to sign. Alice in Wonderland meets the New York City Clerk.

I had carte blanche from the bride and groom to write the ceremony, and to keep it a secret. I think that if a couple it listening to their ceremony for the first time, they will be more present during it. For Steve and Lee Ann, I wanted a ceremony that reflected their relationship and that wasn’t too formal. I kept some of the constructs of a traditional wedding with vows and the exchange of rings, but the rest was fairly free form.

I asked them individually to provide me with some notes on why they were choosing each other, and their thoughts about marriage. While writing the ceremony weeks before the big event, no one heard it–not even for a practice round. My hope was that it would create a personal and spontaneous moment for my dear friends and their guests.

In the end, I was pleasantly surprised to get ordained. I was particularly thrilled to be ordained in the State of New York on the eve of Marriage Equality. Because we live in a cynical world, the moments of joy and celebration that weddings give us are incredibly important. My first New York ceremony really sums up how I feel about why we should embrace marriage. Some may argue the institution is outdated and too traditional, but I think we need it more than ever.

Ferris Bueller said that life moves pretty fast, if you don’t stop and look around every once in a while, you might miss it. That’s even more true today than it was in 1986 when Ferris Bueller said it. Think about how quickly our frenetic world moves. We’re texting on our way to the subway. We fast forward through commercials while we check our e-mail accounts and play angry birds. We tweet over dinner and fall asleep with the tv on.

Given the way that we live today, I think that marriage is more important than ever. People think that marriage is all about commitment and making promises to each other—but that’s not it. When you look at Steve and Lee Ann—together for 8 years—they are a committed couple. Promises have already been made. We celebrate this marriage not because it’s a promise, but because it’s a pause.

These days, we need pauses. Weddings like these are welcome interruptions to the days and weeks and months that Ferris Bueller so kindly reminded us tend to speed right on by. Imagine for a minute that we could silence the chirping phones, darken the neon billboards, we’ve forgetten about our facebook accounts and we’ve turned off 24 news cycle. What if it was possible to stop all of the static that distracts us from the minute we wake up everyday? If we concentrate hard enough, can we imagine that the traffic outside has disappeared–imagine that the subways aren’t rumbling beneath us. Let’s together try to stop the world from spinning for just one moment–just long enough to think only of what exists in the space between these two people standing before us. Can we give ourselves enough quiet to stop and appreciate it? The fidelity, the compassion, the passion, the humor, the music and of course, there is so much love. These are the things that we see clearly when we stop to look around. These are the things worth celebrating; worth codifying; worth amplifying through marriage.

So this is what marriage gives us — a beautiful pause while the rest of world seems to keep zooming by. It is our reminder that when we strip away all of the madness of our modern lives, there is a simple, elegant and enduring love that gives us our strength.

Steve: Lee Ann loves you because you are the kindest person she has ever met. You protect her, not just in the sense that you would keep her safe from harm, but because you defend her in small but profound ways. She loves that when she comes home in the evening, she can tell you what’s on her mind, and not only lend her an ear—but you listen to her frustrations–and always take her side.

Maybe most importantly Steve, you make her laugh everyday.

Steve, do you take Lee Ann to be your wife? Will you continue to be her protector, her cheerleader, her kind-hearted comedian while you spend your life together?

Lee Ann , Steve loves you because you are positive and creative. Steve isn’t sure whether you are smarter than you are sexy, or sexier than you are smart. Truth is, you get top scores in all categories, so it’s really hard to tell. You are a natural caretaker who brings out the best in Steve—as he hopes he does in you.

I don’t know where he gets this Lee Ann, but apparently you have a silly side? Like you, he laughs everyday.

Lee Ann, do you take Steve to be you husband? Will you continue to be his brainy muse, his nuturer, his hilarious side-kick while you spend your life together?

Steve, will you put the ring on Lee Ann’s finger and repeat after me?

Lee Ann, will you put the ring on Steve’s finger and repeat after me?

By the power vested in me by New York City and state, I pronounce you husband and wife.

Want Carey Bertolet to officiate your wedding? Get in touch at marriedbycarey.com.