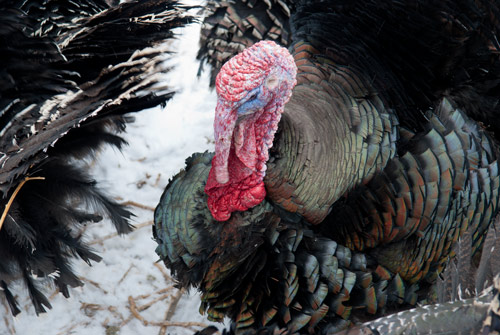 We’ve been noticing a lot of searches for “turkey, Brooklyn” on our analytics (which we check as obsessively as the next internet entrepreneurs) lately. They’re landing on a post that Cathy Erway originally wrote for us, and updated a year ago, called Where to Get Your Gobble Gobble. So to give you the latest intel, we called up our favorite meat purveyors and asked them about their turkeys.

If you don’t need to cook a turkey, or have yours handled already, here are recipes for a few sides, that we got from chefs around Brooklyn last year. Grandma Winnie’s Spinach Salad, from Scarlett Lindeman, a chef at Roman’s, comes highly recommended.

First, a few basics: Calculate about 1lb of meat per person, more if you want lots of leftovers. Heritage and pasture-raised birds are better when cooked at a lower heat than a Butterball-type turkey, around 325 degrees. This guide on Epicurious, by Brooklyn author Melissa Clark, answers pretty much every conceivable turkey cookery question. If you take the bird out of the fridge, and out of brine, if using, about an hour before putting it in the oven, that will speed the cooking time up as well, without sacrificing tenderness.

Free-range means that birds have access to the outdoors, but that can be a tiny yard for many birds. Pasture-raised means they spend most of their time outdoors, scratching, foraging and generally engaging in bird-like behavior with plenty of room to roam. Broad-breasted whites are the breed that commercial growers use, but they also flourish in a pastured environment–they’re immensely robust animals. Heritage breeds, Bourbon Reds, Narragansetts and such, tend to have less white meat and a fuller flavor. Any pasture-raised bird will be tougher than a commercial bird without proper cooking, due to the fact that their muscles are better developed. Several of the butchers we spoke with offered their cooking tips for their birds, below.

Fleisher’s Grass-Fed and Organic Meats
Brooklyn newest butcher shop is selling broad-breasted white and heritage breed turkeys, both for $8.99/lb. The birds are coming from a ranch overlooking the Pacific Ocean in Bolinas, Calif., and from a variety of local farms and 4-H programs. Owner Jessica Applestone explained that all of the birds, no matter the size or breed, have been raised outdoors in a natural setting. “They are extremely pasture-raised,” she said. “Last year a farmer called me in tears because raccoons made off with 23 of their birds, and they were raising just 40 for us.”

Fleisher’s is taking turkey orders by size, ranging from around 7-8lbs to giant birds that they refer to as 29-and-ups. Yes, 29-pound turkeys. The smaller the turkey, the more likely it will be a heritage breed, and you can specify if you have a strong preference over a heritage or a broad-breasted white. Applestone suggests ordering in person for the best experience. “Come into the shop and we’ll walk through process together,” she said. “It’s much better that way in the end.” Their Brooklyn location is at 192 5th Avenue, between Union and Sackett.

As for cooking those “extremely pasture-raised” birds to juicy perfection, Applestone urges, “Brining, brining, brining,” And, she said, “Don’t overcook the bird. You can take it out of the oven at 155 degrees [internal temperature, measured with a meat thermometer] and let it go up to 165 while it rests.”

The Greene Grape Provisions
If you’re looking for a one-stop Thanksgiving shopping experience, it doesn’t get much easier than The Greene Grape. They have a nifty online order form where you can order a turkey. There are three types of free-range birds from Lancaster County to choose from, all-natural ($4.49/lb), organic ($5.29/lb) and heritage ($10.99/lb). On the same form you can add on sides like wild mushroom stuffing, honey and thyme brussels sprouts, apple, pumpkin or pecan pie and even their Thanksgiving six-pack of American wine selections. Once you make your choices and submit the form, someone from The Greene Grape will call you to confirm, clarify and collect payment information. They are taking orders through Monday, Nov.21 for all you procrastinators out there.

Orders will be available for pick-up on starting Tuesday, Nov. 22, and the shop will be open for pick-up, and last minute shopping, until 3pm on Thanksgiving Day.

T. J. Burnham, the Marlow butcher in charge of turkeys this year, suggests separating the legs and breasts for cooking. “They take different times to cook and this is more controlled,” he said. “Hit them with higher heat initially, then back it off.” He recommends crisping the skin and rendering some fat out at 400 degrees for 20 to 30 minutes, then taking the oven temperature down to 325 degrees for the rest of cooking. 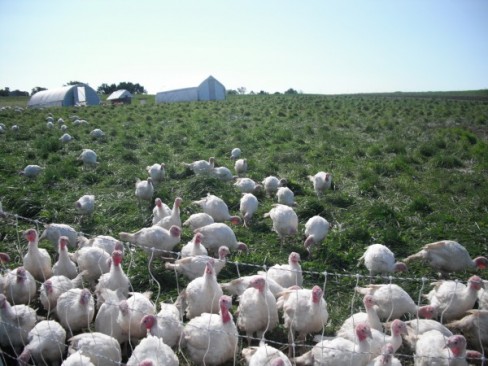 The Meat Hook
Yes, BB and The Meat Hook are connected by marriage. No, it doesn’t make sense to leave them off a Thanksgiving round-up because of that. Disclaimers aside, the Hookers are keeping their turkey game simple this year–all their birds are broad-breasted whites that were pasture-raised on a single farm in upstate New York. Meat Hook turkeys cost $6.99/lb and can be ordered in the following size ranges: 10-14lbs, 14-19lbs and 19-22lbs. Order online, over the phone 718-349-5033, or in person, at the shop. Birds will be available for pick-up starting on Sunday, Nov. 20.

The butchers at The Meat Hook also suggest roasting your bird at 325 degrees. They explained that because these turkeys live outside and walk around foraging and doing other bird things all day, their musculature and connective tissue is better developed than that of a commercial bird. To get a tender bite of turkey, you’ll have to cook it longer at a lower temperature. You can blast the bird with high heat either at the beginning or the end of cooking, they say, to crisp the skin and render out fat for gravy, though if you want to baste with pan juices, start with high heat. They’re fans of brining as well–here’s Brent Young’s Roasted Barley Brine recipe.

Heritage Foods U.S.A.
Heritage, also the masterminds behind the Heritage Radio Network, that shipping container radio station at Roberta’s, is a Brooklyn-based meat supplier that just opened a shop in the Essex Street Market. Order a turkey online that will be shipped to your home, or head to the Lower East Side to pick one up at the market. At this point though, their Kansas- and West Virginia-raised heritage breed birds are close to sold out. They only have 8-10lbs. ($72 plus shipping) and 10-12lbs. ($82 plus shipping) available online. Turkeys will arrive at your front door, via FedEx, on Nov. 22.

You can also get a birds at the Essex Street Market for $7/lb. Sign up for a bird now, pick-up starts on Nov. 16. These will be on the smaller side, warns Heritage founder, Patrick Martins, and very much first come, first served.

Greenmarkets Around the City
Turkeys from Greenmarket farmers vary quite a lot in price, ordering deadlines and pick-up times — here’s the guide the Greenmarket folks have put together if you want to go and wish your turkey farmer a happy Thanksgiving in person, or maybe bring her a pie.