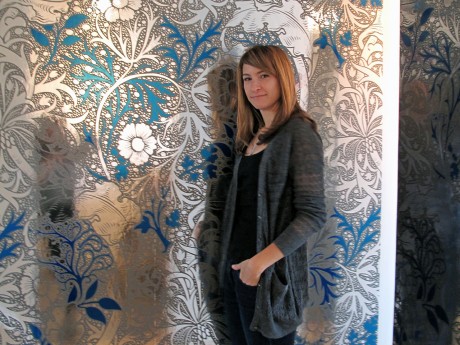 Despite owning her own Cobble Hill condo, Beth Weinstein is hesitant about making big design decisions for her home. It once took her two years to pick a color for a wall, and ultimately, she chose light beige.

“My attention to detail is so hyperaware, for the most part I’m afraid of doing anything major,” said Weinstein, who works in fashion. Though she describes her design style as “eclectic,” and mixes her vintage finds with her Ikea, the overall feel of her apartment is “pretty neutral,” she said. 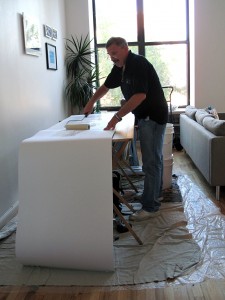 Then she won Flavor Paper wallpaper, and free installation by a professional hanger, Jeff Strumeyer of J Marc Wallcovering, in our 3rd Home School contest with The Sweeten. Though she’d never used wallpaper before, she had seen the Flavor Paper showroom on Pacific Street on a neighborhood house tour, and intended, at some point, to buy one of their patterns.

“Their designs are really unique, and I love that they’ll do custom colors—the colors are amazing.”

To help her winnow down her choices, she consulted friends. Knowing her style, many suggested she go for the simplest pattern they offered, Sheba. But ultimately she chose Kabloom for an unused space beside her kitchen, where she intends to build a bar area with shelving and a wine fridge. (“What’s the point of going to Flavor Paper if you’re going to get simplest paper they have?” she reasoned.) 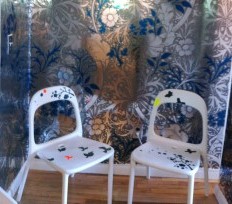 She selected gray with a chrome background, and Flavor Paper threw in an extra pop of color–a greenish teal that just happened to be an accent in some of her pillows and artwork. She then commissioned a friend who runs Red Tree Creations, which typically stencils children’s nurseries, to embellish two chairs for her using the same color.

So is Weinstein happy with her new wallpapered nook? “Now I want more!” she said.