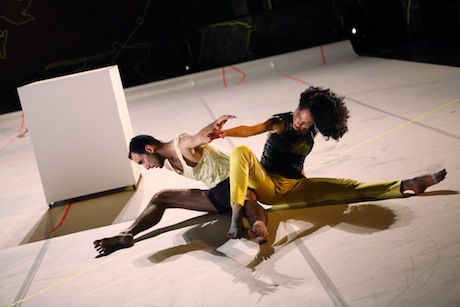 Upon entering the BAM Harvey Theater to see John Jasperse’s most recent creation, Canyon, an usher held me back and asked me to wait.

A white wooden box with four wheels and perfectly pricked air holes shuffled past the entrance and along an aisle. Four female ushers stood around the box with maternal curiosity, offering the box advice and narrating its actions. When it attempted to scoot down a staircase too narrow for its dimensions, one usher leaned over the box and said, “That’s not going to fit.”

Later, when the box had given up and retraced its steps down a wider staircase, she commented, “He’s figured it out,” then laughed, “At least we think it’s a man in there.”

There was a man inside the box—Tony Orrico, Canyon’s visual designer. For the duration of the 70- minute piece, and even for quite some time before and after, he confined himself to the 30 by 40 inch box wearing only his underwear, as he laid down a continuous line of fluorescent orange tape, navigating the theater with a compass, a pocket mirror, and a wrist watch.

Orrico applied yellow-green highlighter masking tape in intricate and meandering lines throughout the theater. Tape canvassed seat backs, guard rails, exposed pipes, and drew veins along the walls and floor.  The stage was completely open, and the tape on the back wall could have traced borders of undiscovered countries, their topography described by the exposed brick.  Tall rods with small fluorescent, orange flags stood in a diagonal line, spanning the stage.  They became movable pieces as the performance progressed.

Throughout Canyon, Orrico’s box peeked out of the red velvet curtains at the audience or appeared on stage, edging among the dancers like a blind creature, a cabinet come to life.  At one point it even laid tape on Jasperse’s body, as Jasperse lay still on the ground.

Jasperse is known for his oddly funny and cerebral choreography, but Orrico’s box is only a touch of humor in a more serious piece that favors abstract expressions. Canyon diverges from what one expects in a Jasperse piece.  It incorporates more dance-based movement, and as a result, Canyon resists definitive meaning.

In a Wall Street Journal interview, Jasperse explained, “People are looking for a certain kind of understanding that is very fixed and related to an idea that there is a correct way. People look so aggressively for it, that they are unable to engage in the other kind of experience that dance really does have to offer, which is much more about poetics.”

In Canyon, Jasperse attempts to move beyond language, to explore “the transformative power of losing oneself in visceral experience, where intellect is humbled into a state of wonder.”

The six dancers started the piece by jumping, their arms swinging with the momentum of footwork that propelled them across the stage. Canyon achieved visceral experience through sheer physicality, and it humbled the dancers to near exhaustion. After the first jumping section, the company stood in a diagonal line, and were motionless except for their heavy breathing.

The dance flowed from high energy to mesmerizing stillness.  In slower sections, dancers seemed to move through unseen surroundings that tripped their steps and excited their touch. They reached tentatively into empty space as though encountering something unknown. The movement embodied discovery, simultaneously futuristic and prehistoric, languorous and full of awe.

Dancers shifted seamlessly from one partner’s synchronistic movement to another, allowing phrases to ripple and linger, their bodies swirling with directional impulses. Touch or controlled collisions often initiated re-pairings.

The music mirrored the dancer’s energy, sometimes discordant, static, and pulsing, but also serene, skating between space age and rainforest tones.  A quartet performed the score, composed by Hahn Rowe.

Because of its abstract nature, much of Canyon’s movement blurred together; however, there were moments of visual clarity. A large square of white flooring covered most of the stage. It quickly sloped up near the back wall to form a two-foot ledge. Company members, Lindsay Clark and Erin Cornell, slipped over edge, so that most of their bodies were obscured. They performed a duet of kneecaps and arms that swayed like palm trees as they rolled behind the ledge.

Later, James McGinn performed a gorgeous, slithering solo along the slope. He moved with the fluidity of water, sliding up the edge and yielding to gravity.

Amid Canyon’s panting athleticism, it is easy to get lost in the constant motion of it all, yet moments like these, which fixate on one dancer, or a few simple movements, or even stillness, evoke the state of wonder that Jasperse aims to create.