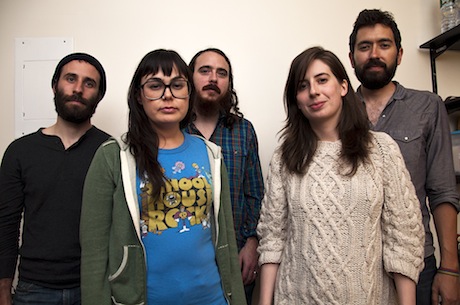 Every month or so, Brooklyn Based unveils an exclusive song by a Brooklyn band, recorded at Nadim Issa’s state-of-the-art recording studio in Gowanus, Let ‘Em In Music. Then, Laura Leebove of the music-inspired food blog Eating the Beats creates a recipe with–or inspired by–the featured artist. This month’s mp3 is The Loom’s previously unreleased song “The Devil You Know,” and the recipe is stuffed acorn squash, cooked with the band.

In “Song for the Winter Sun,” from The Loom’s 2008 EP At Last Light, the band sings, “This year we will not sleep our way through the winter.” The music behind it matches that sentiment: The delicate, repetitive mandolin foundation could lull someone to sleep, while the steady stomping and clapping that accompanies it could serve as a wake-up call.

The group has grown tremendously in the three years since: They’ve played hundreds of shows, gone through a few personnel changes (a new vocalist; going from six members to five), and recently released their full-length debut, Teeth, on Crossbill Records. “When we made the EP, we didn’t really know what we wanted to sound like,” says vocalist/guitarist John Fanning. “We were still very much figuring that out.” But by pushing themselves to learn one another’s styles and experiment with new ways to use their instruments, they’ve found a clearer direction that focuses on one of their greatest strengths as a group: balancing extremes. “We have a dual love of things that are really quiet and folky and haunted-sounding but also stuff that’s really loud and dissonant and kind of manic, with a lot of textures,” says Fanning.

Teeth‘s opening track, “With Legs,” begins with a delicate banjo and hushed harmonies, then adds a horn, electric guitar and tambourine; in one of the album’s most exhilarating tracks, “The Middle Distance,” there are quick, intense vocals mixed with pounding drums, and it later builds with horn, piano and a glitchy guitar. Fanning says they started to run instruments like banjos and horns through effects pedals to create different textures.

The band’s lyrics have a similar dichotomy, focusing equally on joy and melancholy: In “A Song of Faint Praise,” Fanning sings, “And I guess this troubled, worn-out skin/ Is just the one I’m at home in/ It’s where I’ll stay,” while in “The Middle Distance,” it’s an intense chant of “So this is for the ones who still have joy inside their hearts/ May you always find it/ Where you don’t have to look.”

The battle of emotional chaos versus calmness and comfort is also what drives the Loom’s BB Songs track, “The Devil You Know,” a song that didn’t quite fit on Teeth. Fanning spent several years in New York, but now lives upstate in Beacon with his wife (the rest of the band lives in Brooklyn). The song was inspired by “finding fulfillment in new ways that maybe [my] younger self wouldn’t have,” he says, and not feeling sad about leaving his chaotic city chapter behind. “Even though I was in New York for almost a decade, I always felt drawn to places that were more peaceful, and I’d take a lot of opportunities to escape the city when I could.” Ultimately, he wants the Loom’s music to show that it’s possible to find light–even in the darkest times, even if it seems impossible. “There’s a lot of joy to be experienced,” he says, “but it can be hard to get to it.”

The group just finished up its longest tour to date–three weeks, mostly on the East Coast. They’re playing at Mercury Lounge on Dec. 3, and plan to tour the West Coast in the spring.

Photo by Evan Daniels. Interview by Laura Leebove, the Brooklyn-based writer and self-taught home cook behind the music-inspired food blog Eating the Beats. Her full-time gig is in the editorial department at eMusic, and she spends most of her free time in the kitchen of her Bushwick apartment. Follow her on Twitter at @leebovel.