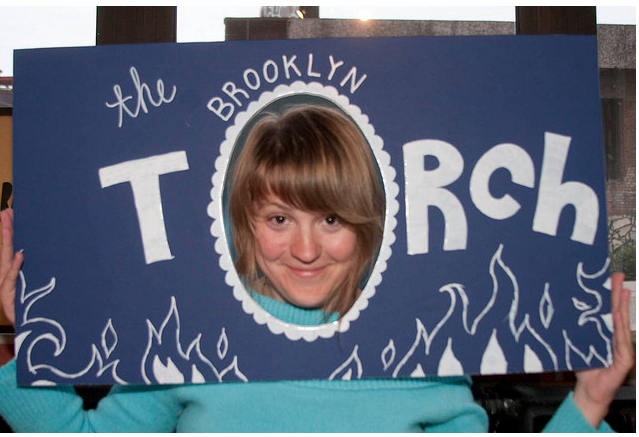 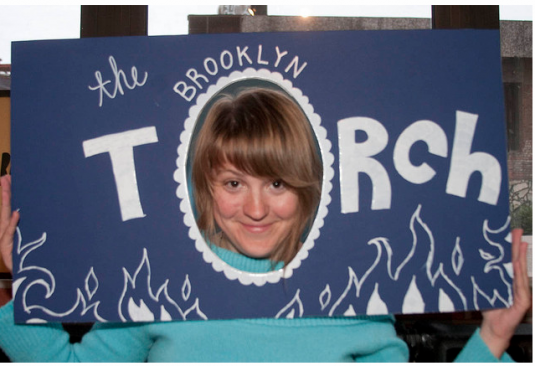 Nate Buckley will craft you a mixed tape for just seven Brooklyn Torches. Morgan Stevens-Garmon will bake you bread for five, and Karen A. Dahlberg will be your wingman for 10 Torches an hour. If that all sounds like the barter system mixed with performance art and dash of idealism, you’re not far off.

North Brooklyn is on the verge of having its very own currency–the Brooklyn Torch. A project now three years in the making, the Torch aims to stimulate the local economy by supporting commerce in North Brooklyn neighborhoods like Williamsburg, Greenpoint, Bushwick, as well as adjacent areas like DUMBO.

“We have a lot of key elements to make a successful local currency here: a strong sense of community and pride, a wealth of talent ranging from artists and designers to food purveyors and health care, as well as emerging micro industries,” explained Mary Jeys, the force behind Brooklyn Torch.

A Brooklyn artist who came up with the idea of the Brooklyn Torch while unemployed and searching for a meaningful project, Jeys turned to the underlying principle of modern money for inspiration. “You have to trust people. Somehow I felt that it resonated in currency,” she said. “I realized that that’s what we do with the dollar. I realized it was actually all just made up of a social contract. We all agree that a green piece of paper with a certain feel is a dollar. And that that dollar means the same thing to you and me. We agree that a pack of gum is worth a dollar-and-a-half and that your dollar and a half is equal to my dollar-and-a-half. ”

Jeys envisions the Torch as a way to promote small businesses and services within the local community, as well as way to encourage person-to-person interaction through commerce. “Certain things will always be exchanged in the dollar,” she noted, but for many items the Torch is a way to keep money, and the social exchanges that go along with it, close to home.

Though the Torch has not yet launched, it has steadily gained support from potential participants. “Most business owners in North Brooklyn who we have approached are enthusiastic about the concept,” said Amanda Dora Riesman, a small business consultant who is part of the Brooklyn Torch team. “As we roll out the currency, there will be more information and assistance about participating made available. In the meantime, any local business who is interested in participating is welcome to get in touch with us,” she explained. And while the currency is focused in North Brooklyn, businesses in other parts of Brooklyn are welcome to honor Torches as well.

Jeys was inspired by successful alternative currency programs in New England and her encounters with local currencies throughout Brazil. She found guidance from Susan Witt, founder of the the Berkshire region’s Berkshares and also looked closely at Ithaca Hours–one of the most prominent local currency programs in the country. Over the last two decades several million dollars worth of Hours have been exchanged at more than 500 area businesses.

While some local currencies are based on particular exchange rates–one Ithaca Hour is equivalent to $10 U.S. dollars (roughly one hour of labor)–the Brooklyn Torch will be exchangeable at a rate of one to $1. Jeys hopes to add value to the Torch by encouraging businesses to offer discounts and special offers for patrons who pay with Torches. There is no law in the U.S. that prohibits alternative currencies, and the income is taxable as its dollar equivalent.

Still, a local currency is not easy to establish. So far one of the biggest challenges has been finding a paper that is unique enough to prohibit counterfeiting. Jeys had wanted to keep all aspects of production of the Torches local, in order to stay true to the principles of creating a local currency, but a sourcing a local paper manufacturer proved insurmountable. “Paper manufacturers are huge polluters, so they were driven out of the city,” said Jeys. “I quickly learned we had to go outside.”

The Torch made its debut in February, in the form a Torch vouchers, a DUMBO’s First Thursday gallery walk. The vouchers will be redeemable for Torches once the currency is issued. “Mary was there promoting Brooklyn Torch and she had so many people signing up for it and there was such a great response,” said digital media designer Danii Oliver. Her design studio in DUMBO, Damn Digital , is one of more than 40 businesses and service providers registered to accept Torches and Torch vouchers. The others by and large are creatives and freelancers—dogwalkers, singers, graphic designers, who advertise their rates in Torches.

“I think that it’s a way we can revamp our economy here in Brooklyn,” Oliver said. “Everyone is trying to get the almighty dollar and that seems to be the hardest thing to get. I think that if we can come together as business owners and support each others’ needs with Torches, then we can create our own sustainable economy for small business and the residents of Brooklyn.” Oliver’s own fee is 20 Torches per consultation, with negotiable rates for marketing, design and development services.

To date, funding for the currency’s production and promotion has come from a few small community stipends, including the Impossible Torch Photo Project, a month-long experiment funded by Macktez, a local IT company, which ended yesterday. Jeys recorded her visits to local businesses to explain the concept of local currency to store owners and managers. All the film was donated by The Impossible Project, a collaborative rescue of the last surviving Polaroid film plant producing new film. The two projects share an emphasis on tangible analog materials: Polaroid film and paper currency.

Jeys won’t put a date on the release of the Torch, but says that it’s close. Both Brooklyn Grange and Brooklyn Kitchen have recently expressed an interest in accepting Torches, and with enough support, the bills could be changing hands by fall 2012. For now, the growing list of businesses, as well as freelance wingmen and mixed tape crafters, poised to accept Torches (and currently accepting vouchers) can be found in the Brooklyn Torch registry.