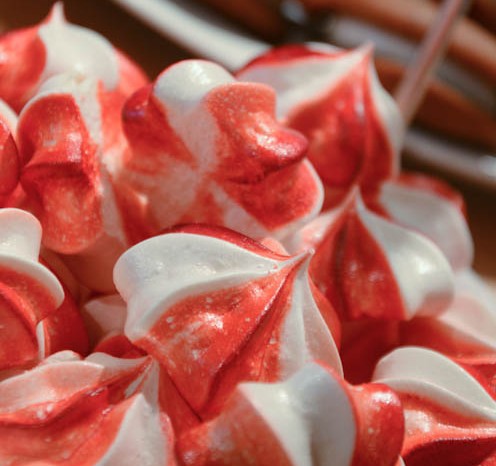 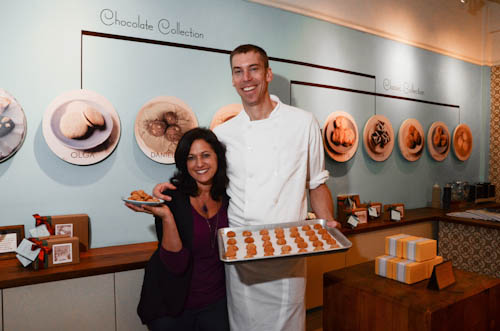 Dawn Casale and Dave Crofton, baking the cookies in their Brooklyn shop.

Dawn Casale and Dave Crofton, the married co-owners of One Girl Cookies, live that entrepreneurial dream so many Brooklynites share—to start a little shop somewhere with someone you love, making beautifully crafted products for loyal customers.

Their Cobble Hill store is lovely, tucked away on the corner of Smith and Dean, just removed from Smith’s traffic. Inside, life-sized family photos and a family tree are painted on the walls. A minimalist display case exhibits bite-sized cookies with names like Lana, Penelope, Juliette—the names, so inviting, and the treats so delicious, that one customer even named her daughter Lucia, after a layer bar stacked with short bread, caramel and chocolate.

One Girl Cookies has been in business for 11 years now, growing from a catering company stationed in Casale’s tiny West Village apartment to the popular Brooklyn shop that opened six years ago, and naturally, their most recent step has been to write a cookbook.

One Girl Cookies: Recipes for Cakes, Cupcakes, Whoopie Pies, and Cookies from Brooklyn’s Beloved Bakery, will be released on January 10, 2012. The book contains recipes from their classic cookie collection that Casale and Crofton have developed and tweaked over the years, as well as newer recipes that they create seasonally. They also dedicated an entire chapter to family recipes, with traditional Sicilian desserts from Casale’s family, and homey American sweets from Crofton’s, including his grandmother’s meringues. 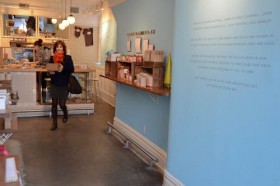 A customer in the Cobble Hill shop.

Crofton, the chef of the operation, adapted the recipes, adjusting commercial measurements and instructions into batches sized for home bakers. Documenting some of Casale’s family recipes was an additional challenge.

She explained, “My family’s recipes are not really like recipes at all. Dave had to make them into something that would actually work without my aunt there saying ‘Put a little more flour,’ or ‘Put a little bit more sugar in that.’ ”

Casale grew up in a big Italian family. “Cooking and eating was a large part of how we socialized,” she said. “And so I think that from a young age I always appreciated food and the joy it could bring people—the maker and the recipient, the eater and the cook.”

It was her upbringing that inspired Casale to start One Girl Cookies after working in retail for several years at Barney’s New York. Casale and Crofton met later when One Girl expanded, and she hired him to be her baker.

“He wooed me with the sweets he made in pastry school,” she laughed. “Love in the kitchen. Love over the cookie dough.” 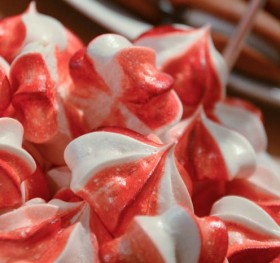 These holiday meringues look as good as they taste.

Casale wrote the book’s introduction and the headnotes for the recipes, aiming to set a tone that’s inviting and attractive, approachable, but not simplistic.

“We didn’t want it to be that book that people would only take out for the most special occasions,” she explained. “But instead the book that they go to any time they feel like making something sweet. We want it to be that really worn-in grease stained, dog-eared, used book.”

As a result, the book is personal, with old family photos at the beginning of each chapter and the stories behind the treats entwined with recipes. Baking is so integrated into their family life that there’s plenty of material to draw from. “Just this past weekend,” Crofton explained, “Dawn was up in Westchester with her whole family. So it’s, mom and aunt and sisters and little kids running under foot, and they all made thousands of fig cookies, which is one of the recipes that’s in the book.”

“It’s a tradition,” said Casale. “We’ve been doing it for as long as I can remember. We do it every year. We all get together and make the annual fig cookies.”

The family tradition of cooking continues in their home whether they’re thumbing through favorite books by chefs like Susanne Goen, Mark Bitman, and Jamie Oliver, or finding something simple to make with their two-year-old son, Nate, who was born just before they began writing the book. “Dawn has started baking with our son, and he loves it,” said Crofton, “He’s pretty good at stirring things, too.”

“We do mostly muffins and quick breads because that’s good for a two-year-old,” added Casale.

With the book, Crofton and Casale hope to inspire the same sort of bonding while baking in other homes that is found in theirs. “When you bake something that’s special or even something that’s not so special that you just make with your kids or a friend or whatever. It’s important. Those are the things we remember,” Crofton explained. “It would be really nice if our cookbook could be a part of other people’s families. The goal is that people use it, and make it a part of their lives.”

Check out two recipes from the book, spiced oatmeal drop cookies and red velvet cake, as well as the secret behind chilling cookie dough, on our blog.