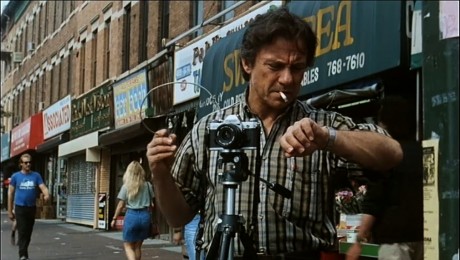 Tonight, for fans of Harvey Keitel, Paul Auster, and Park Slope/Windsor Terrace, Smoke (1995) is playing at BAMcinématek at 6:50pm. It’s the third installment of BAM’s Brooklyn Close-Up series, a year of films shot entirely in Brooklyn.

In Smoke, the action revolves around Auggie’s (Keitel) Brooklyn Cigar Shop at the corner of Prospect Park West and 16th St., that a writer named Paul Benjamin (William Hurt) and other locals haunt. It’s filled with street scenes from Windsor Terrace and Park Slope, and stars like Stockard Channing, Forest Whittaker and Ashley Judd (making a rare appearance outside of a Lifetime movie). And while the vignette film often becomes nothing more than a star vehicle–much like this season’s New Year’s Eve—Smoke is a literate, episodic film with substance instead of just cameos. Even better, Paul Auster, who wrote the screenplay, will be there tonight, answering questions along with actor Giancarlo Esposito.

If you go, be sure to check out Nathan Gelgud’s limited edition print created especially for BAM’s series. He’s illustrated scenes from Saturday Night Fever, Goodfellas, Do the Right Thing, and many more quintessential Brooklyn films, all of which will be screened at BAM over the next year, usually on the last Monday night of the month, with guest Q & As and complimentary Brooklyn Brewery beer poured in the lobby. (You can see all the films and neighborhoods represented here.) The 18”x24” poster is $25, perfect for the film fan or Brooklyn fanatic on your list, and it’s on sale in the lobby of BAM and at Greenlight Bookstore.