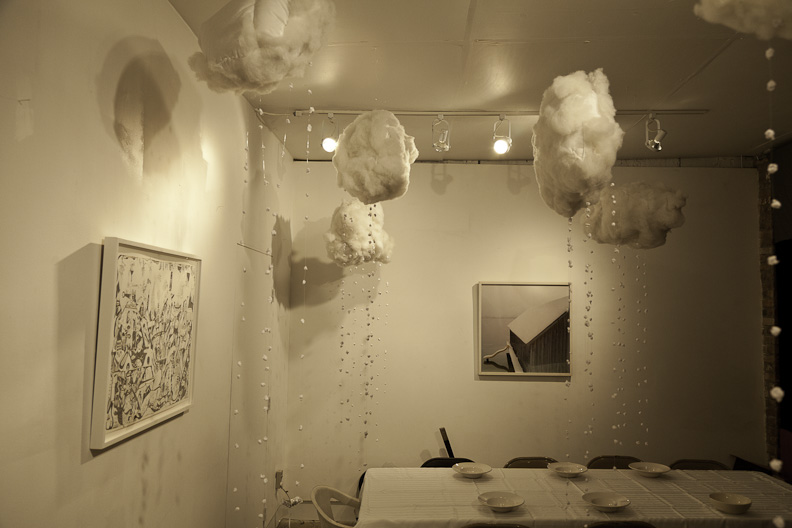 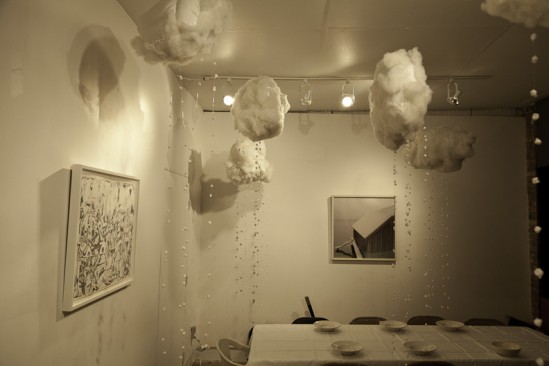 Above the Prospect Expressway, on 17th Street, a garage shut its doors to December’s early darkness. My friend Andrea stood outside the alleged gallery space, waiting for me, uncertain whether she had found the right place. In front, a sign pointed inside, and a flyer peeling from the door read, “Open Source Gallery.”

We pulled open the door, ducked past a layer of foam insulation and under a curtain to find Monika Wuhrer, the gallery’s owner, and her neighbor, Michael, sharing a platter of roasted root vegetables, as his dogs ran around under foot.

For the month of December, Wuhrer runs the Open Source Soup Kitchen. She started the Soup Kitchen in 2008, the same year that she opened the gallery. Anyone can sign up to cook a meal and curate the gallery space for the evening. Inspired by the giving spirit of the season and a deep love of community, Wuhrer invites people from all walks of life to attend, and 15 to 20 diners show up just about every night.

On this Monday, however, the guy who was supposed to cook didn’t show up, and Wuhrer pulled together a meal just in case anyone from the neighborhood was hungry. 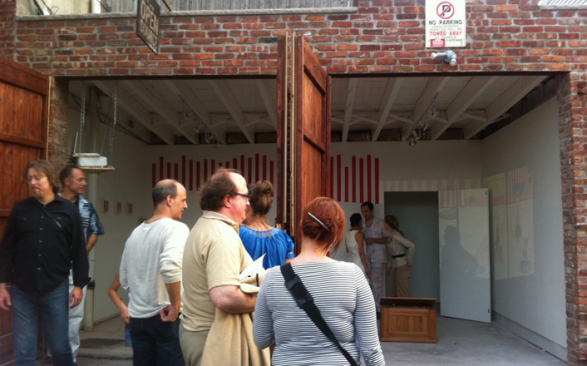 The new Open Source Gallery seen from the street.

She wore a navy bandana over her short dark hair, and a drapey coat with accents in red and green yarn. She was easy going, comfortable, happy. Born in Austria, she entered the U.S. green card lottery on a whim, and won. She came to the U.S. in 1999, met her husband, had kids, moved to Park Slope.

The gallery used to be a block away on 5th Avenue before a fire at the nearby Associated Supermarket destroyed it in 2010. This past year, Wuhrer reopened the gallery in a garage space just off of 6th Avenue, which she is renovating piece by piece.

A few decorations from the night before were still up—an Irish group had come in, made soup, drank whiskey. They stuck potatoes on the wall and draped them with golden tinsel. Children’s drawings in green marker hung above a makeshift kitchen space with a hot pad and a cardboard Christmas cherubim played its horn. Twice during our meal, the lights went out because the space heaters blew the fuse.

We ate out of Styrofoam bowls and cracked open beers that the Irish cooks had left behind. Wuhrer said that she normally uses real dishes to encourage people stay, but she opens the gallery every night for a month, and a quieter evening was a relief.

Artists and friends from the neighborhood usually fill the Soup Kitchen, and occasionally the truly hungry come too. Wuhrer said that the indigent rarely return a second time, uncomfortable with the social environment, but one December, a girl came every night. No one realized she was homeless until the end of the month when she said that she had been moving around, sleeping somewhere new each night, and the Soup Kitchen had given her a place to eat for the month.

As we ate, Wuhrer and Michael talked about former Soup Kitchen events. A few years back a writer had read a story that she had written for the night about a murder in a soup kitchen, and over the past weekend, a woman had prepared a seafood dish with lobster.

“Weekends are the best nights to come,” Wuhrer said, “They are the first slots to fill up.”

I had caught the Soup Kitchen on an off night, and I wanted to see it in full swing. We finished dinner, and I made a plan to come back on Wednesday.

Open Source diners come for the food and stay for the conversation.

When I returned two nights later, I found the space transformed, engulfed by the soft whiteness of snow.

The tables were set with clean tablecloths and creamy bowls, and gluhwein spices wafted through the room. Sascha Mallon, artist and curator for the night, made clouds from inverted pillows that trailed fishing line with flecks of tissue and aluminum foil. She hung them throughout, and even put one in the bathroom, which she offered to Wuhrer as a permanent installation.

On the walls, Mallon displayed one of her ink drawings, a chaotic black and white winter wonderland populated by human and non-human creatures that act out dramas in three-inch spaces. The top of one story becomes the bottom of another; the outline of one character melds into a smooth boundary. The scenes are comic and dark, and in one, a character—part man, part hoofed beast—gets his tongue stuck to an icicle.

Mallon also displayed a photo of a water slide blanketed in snow, taken by her husband Stephen Mallon as a part of a series of photos he took exploring the stillness of off-season vacation spots, as well as a photo of snow-enshrouded trees by their friend Sabine Scheckel.

Mallon said that she liked “turning things inside out,” and so she brought the weather inside with dinner. Mallon is Austrian like Wuhrer, and she too wore a bandana over her head as she dished out Kasespatzle, a dumpling like noodle with cheese and caramelized onions. She looked ethereal when she untangled the fishing line from her cloud installations or spoke about the stories embedded in the intricate drawings that take her about two months to complete.

People filtered into the gallery, and by eight the two tables were full. I spoke with a judge, a social worker, a dancer, and a hand full of artists and filmmakers. I spoke with children and adults—some born as far away as New Zealand and others who ventured from across the city, including a woman who lives in East Harlem.

As beautiful as her installation was, Mallon credited the night to Wuhrer. “Tonight is really about the cooking and the eating,” she said. “I feel like I’m a part of Monika’s art project.”

Volunteers can still sign up for a slot the week after Christmas. Check the schedule for open nights and Monika Wuhrer’s contact information. Be prepared to feed about 15 to 20 people. Volunteers in past have cooked at their own homes, at Monika’s house, and inside the gallery, where there’s a hot pad available.

Cooks are lined up for all of this week (though not for Christmas Eve or Christmas night–Wuhrer says they will open the gallery if someone volunteers to cook); dinner is served from 7pm to 9pm, though diners tend to stick around until well after 9. But don’t show up too late–dinner is served on a first come first serve basis.