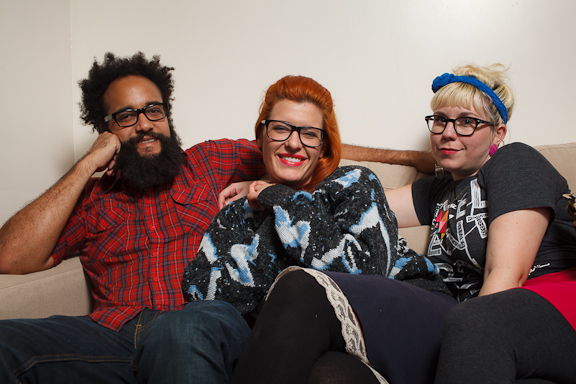 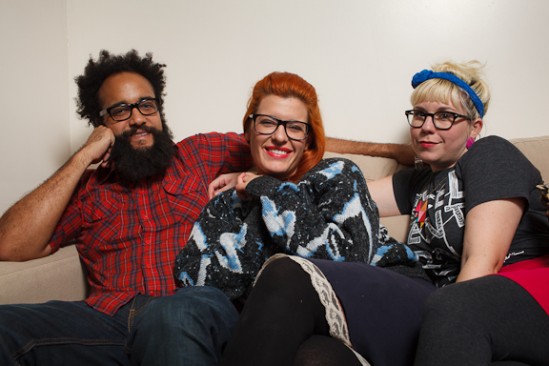 From left, Jeremy Styles, Emily Hope Price and Jocelyn Mackenzie of Pearl and the Beard

Every month, Brooklyn Based unveils an exclusive song by a Brooklyn band, recorded at Nadim Issa’s state-of-the-art recording studio in Gowanus, Let ‘Em In Music. Then, Laura Leebove of the music-inspired food blog Eating the Beats creates a recipe with or inspired by the featured artist. This month’s mp3 is Pearl and the Beard performing Bon Iver’s “Re: Stacks” and the recipe is butternut squash pancakes with maple goat cheese sauce, cooked with the band.

When the members of Brooklyn trio Pearl and the Beard started making music together a few years ago, vocalist/percussionist Jocelyn Mackenzie wouldn’t have called herself a musician. “For the longest time I just played tambourine and shaker. That’s all I knew how to do,” she says. “These two tricked me into learning how to play instruments.”

The band writes tight, harmony-driven songs that have elements of folk, jazz, rock and cabaret, so far on two full-length albums, 2009’s God Bless Your Weary Soul, Amanda Richardson and last year’s Killing the Darlings. They’ve opened for the likes of Dar Williams, Thao with the Get Down Stay Down and Jukebox the Ghost, and they’ve headlined their own gigs at notable NYC venues like the Bowery Ballroom and Music Hall of Williamsburg (they’re playing the latter on Feb. 16). Part of Pearl and the Beard’s success comes from pushing one another to grow as songwriters and musicians by learning to balance personal strengths and weaknesses.

Vocalist/cellist Emily Hope Price says for their cover of Bon Iver’s “Re: Stacks,” collectively one of their favorite songs, they “took all the elements that were totally comfortable for us out.” Pearl and the Beard’s music is usually dependent on bold harmonies”we tend to put as much harmony into our songs as possible,” says vocalist/guitarist Jeremy Stylesbut for this they pared it down to baritone ukulele, percussion, bells and more subdued vocals.

In the original version of “Re: Stacks,” a somber, soul-baring song about the end of a relationship, Justin Vernon layers his own voice over just a guitar. Mackenzie suggests that choosing to cover it might have had something to do with the band’s own layering of ideas and making themselves vulnerable in their songwriting process. They all contribute equally and build off of one another’s lyrics, melodies and song structures, and it’s easy to get nervous when pitching ideas to the other band members. “It’s not just like, ‘This is my idea, this is what we’re doing now, you guys better do what I tell you,'” Mackenzie explains. “It’s more about wanting to have this collaboration, regardless of how awkward it is to be in that moment of making yourself vulnerable. I think we’ve all become better because we’ve been able to give it up a little bit.”

Even though the group works together, part of the fun in listening comes from trying to pick out the separate voices and personalities. On Killing the Darlings, Mackenzie does a lot of belting and whimsy shouts (“Douglas Douglass”), Price often has a sultry, jazzy style (“Hot Volcano”), and Styles provides a smooth croon on his melodies (“Sweetness”). And it’s all amplified when they perform: Pearl and the Beard’s shows are exuberant, overflowing with huge smiles and a contagious positive energy. When I saw them in October, they started their set in the audience, stomping and clapping as they sang “Douglas Douglass.”

Price admits that they’ve encountered occasional challengeslike varying levels of tolerance for rehearsal and not always being able to keep up the high energy right after a showbut when one member needs a boost, the others don’t hesitate to step up. “It’s rare, but sometimes we’ll hit a wall,” says Price. “But we’ve been together for long enough that we’ve been able to work through it and teach each other.”