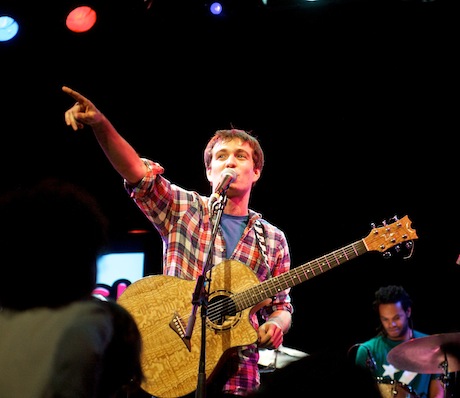 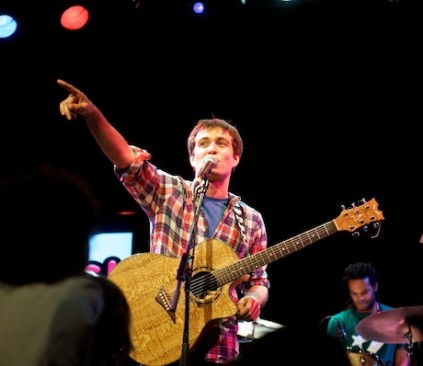 Tim Kubart of the "kindie rock" band Tim and the Space Cadets at the Frolic! party last month

Both juice boxes and beer were the drinks of choice at Frolic’s holiday party at the Music Hall of Williamsburg last month, where the average attendee was about three feet tall. Iggy Pop blared on the sound system, but instead of mosh pits on the main floor there was cushy felt, perfect for crawling babies.

This was the public’s introduction to Frolic!, the borough’s first “rock n’ roll play space” that caters to music-loving parents and their tiny headbangers. It opens today on the ground floor of Williamsburg’s Edge Condominiums, with the cow bells and whistles of a play space gone wild. It features a vintage VW Bus to play in and a Rolling Stones-shaped tongue to slide down; offers classes for kids like Musical Theater and Rock Music History 101; and for parents, pastries and pour-over coffee in a stylish lounge.

The kiddie complex is the brainchild of Williamsburg neighbors and moms Carey Balogh and Julia Dawson. Both hail from the fashion industry but realized they had similar tastes and connections to the music world, which they plan to tap into for guest appearances. Balogh’s husband, for instance, spent 17 years as a production manager and stage manager for bands like The Rolling Stones, AC/DC, Black Sabbath, John Mayer, and Alicia Keys. 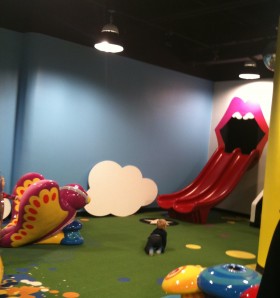 Together the women wanted to create a place for kids that also spoke to their rock-loving interests.

“We’re still the same people, we still love to go to concerts,” says Balogh. So they asked themselves, “How can we bridge the gap between our old identities and our new identities as parents?”

Though a play space may be the easiest way to find that magical balance between work and family—how better to entertain your kids, set your own hours and make money?—musically minded parents often have a hard time balancing their careers with their kids.

Such was the crux of a recently released documentary called The Other F-Word, which profiled famous punk personalities like Flea and Ron Reyes from Black Flag who have to work at staying punk rock once they become dads.

Closer to home, many Brooklyn parents in bands or in the industry struggle with the late nights and shows on the road.

“Touring when your partner is pregnant can put a strain on your relationship,” says Dan Neustadt, a rock musician and entertainment lawyer who lives in Prospect Heights. So after spending months touring with The Hold Steady, he came home three weeks before his daughter Raleigh was born, and hasn’t left for an extended tour since.

Giving up the heavy touring allowed him to stay home for his daughter for her first eight months. Once his wife went back to work, nights and naps became his time for legal work and music.

“Having a child if you work a 9-to-5 job means you see them maybe an hour in the morning and an hour or two at night. But if you’re working as a certain type of gigging musician in the city, then you can arrange your schedule so that you’re spending a lot of time with your child during the day. And then you’re out working while they’re sleeping.”

Staying home has also opened new doors, musically. He’s now able to maintain a weekly residency at the Knitting Factory, and play consistently with his band, Northern Bells, which he couldn’t do when he was touring. (They’ll release their first full-length album in the spring.)

Though there is a limit to how much rocker-debauchery he can partake in, post-kids.

“You don’t want to be hungover or incapacitated when you’re changing your daughter’s diaper at four in the morning,” Neustadt says.

Jack McFadden, an independent talent buyer for Littlefield, The Rock Shop and other music venues in Brooklyn, recently relocated to Austin with his wife and two young children, Griffin and Guthrie. They moved primarily to be closer to family and for a work opportunity for his wife. But moving away from New York also allowed him to better juggle a career that’s always hard to swing with young kids.

“The biggest down side is, for instance, what happened last night,” explains McFadden. “Daddy needed to go see bands and stay out until 2am and get up at 6am to get the kids ready for school and the day—that’s tough. But I don’t live in New York City anymore where that would be every single night of the week.”

Voluntary sleep deprivation aside, McFadden couldn’t imagine another line of work. And his children, meanwhile, get the benefit of a life built around music.

“The kids get to meet so many wonderful and talented people and I think, regardless of whether they pursue music or are any good at it in the future, their souls are rich from being around it. I can see it in my daughter and especially my son, how music makes them feel. That old saying, ‘Music tames the savage beast,’ totally applies.”

Clinton Hill musician and mom Saskia Lane hasn’t given up the touring she does with popular kids musician Dan Zanes and the theater group, Improbable. But she does spends less time away from her two-year-old girl, Luna. 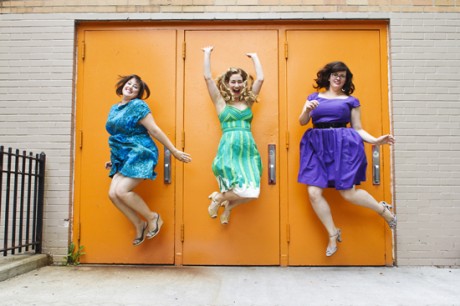 “A two-week tour back in the old days was no big deal. Now if something like that comes up I am set to ponder it for a time, feel slightly tortured about it, but ultimately turn away the work.”

Lane typically limits herself to three-day tours, and lately, has focused more on her band and longest-standing gig, The Biddies, which has recently begun playing kids music as The Itty Biddies. The shift from playing for adults at Joe’s Pub, to kids at Joe’s Pub, has been energizing. “It’s where the fun is happening,” says Lane. “It’s amazing to play for a younger audience because they go bonkers.”

Lane does make exceptions to her short-tour rule if the work is creatively compelling or well paying–particularly if she can bring her daughter on the road. Through the month of February, Lane will perform in the Improbable show, “The Devil and Mister Punch,” at the Barbican in London. Her childcare there is subsidized in part by the theater company, and once the show is up and running, her husband will fly out with their girl and make a vacation out of it.

“In those moments when the car is driving in the opposite direction of my house to the airport, I’m like ‘I can’t do this anymore,’ ” says Lane. Then she gets on stage and remembers that playing music is something she has to do, not just as a person but as a mother.

“I’m setting an example for my daughter because I’m trying to fulfill my dream and stay true to myself.”