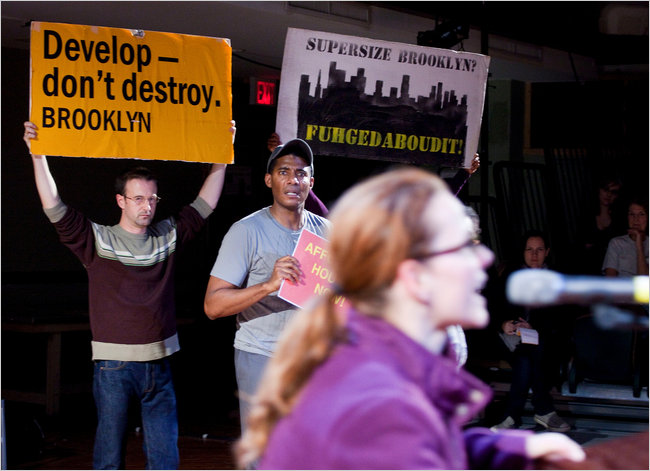 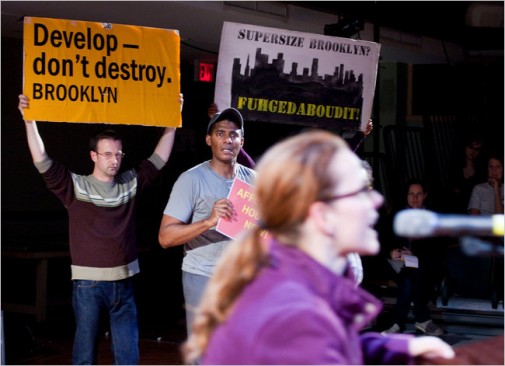 A scene from "In the Footprint."

It took Michael Galinsky and Suki Hawley seven years to film their Atlantic Yards documentary, Battle for Brooklyn, but only about as many seconds to find out that it had been shortlisted for an Academy Award.

Now that the subject of eminent domain may very well share the stage with sequins and tuxedos at the Kodak Theatre at the Oscars on February 26 (official nominees will be announced January 24), Atlantic Yards-inspired art has finally gained traction with viewers and critics alike, in New York and nationwide. 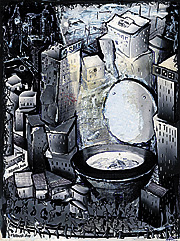 The Barclays Center, in Donald O'Finn's vision of it.

Earlier work was not nearly so commercially or critically successful as Battle. Censorship stymied an AY art show at the Brooklyn Public Library in 2007, which omitted some politically charged pieces including a painting by Freddy’s Bar co-owner Donald O’Finn depicting the Barclays Center as a giant toilet. A series of images of the train tunnels and Vanderbilt Rail Yards that photographer Nathan Kensinger shot in 2005 and 2007 went largely overlooked.

It’s possible that this new wave of artwork is benefiting from an Occupy Wall Street effect. The movement that started in Lower Manhattan in September has cultivated outrage over what its rhetoric refers to as the “corrosive power of major banks and multinational corporations over the democratic process.”  Galinsky agrees with the OWS sentiment, and said that momentum from the movement has generated interest in Battle, among other social injustices. “It took eight years for the rest of the country to kind of catch up,” said Galinsky. “For the whole world to be like the frog in the hot water and say ‘We’re jumping out.’”

As protest art, and the art of protest, captures more of the public imagination, Atlantic Yards-inspired art is finding fertile ground. Here are a few recent and in-progress projects focusing on Brooklyn’s most controversial development project. 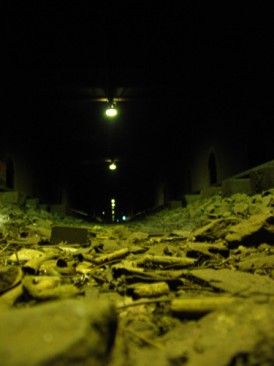 It took Nathan Kensinger several years to get permission to take photographs in the old rail tunnels.

Nathan Kensinger
Kensinger, who has an affinity for photographing abandoned urban spaces, began capturing images of the Vanderbilt Railyards in 2005, but it took him another two years to gain access to the tunnels below Atlantic Avenue. “The area around the Atlantic Yards development site has fascinated me for many years, because of its history and because of the changes it has gone through over the past decade with the development project,” he said.  “But the tunnels underneath the site were particularly mysterious.”

His images of rust ravaged walls and wooden tracks layered with dead leaves or awash in eerie yellow light lend an ominous allure to the area below the soon-to-be Barclays Center. These photos “are part of a larger series of photographs documenting the destruction of historic industrial spaces in Brooklyn,” Kensinger said. His AY photos were published on his website in a three-part photo essay, and selections from that series were included in a solo exhibit at the Brooklyn Library in 2008 and at a solo exhibit at UnionDocs in 2009. A photo from the series was included in a group show at the Museum of Contemporary African Diasporan Art in 2010.

Battle for Brooklyn
This 93-minute documentary is a seven-year odyssey that follows apartment-owner-cum-community-activist Daniel Goldstein’s journey as he and fellow members of Develop Don’t Destroy Brooklyn face off against Forest City Ratner in an attempt to put an end to the $4.9 billion Atlantic Yards project. Anyone who’s been to the Prospect Heights area near Atlantic Terminal in recent months can tell that this story didn’t end well for their efforts, as the behemoth structure of the Barclays Center looms ever larger. The arena is slated to open this September in time for the Nets to start the 2012-2013 NBA basketball season.

The couple started filming in late 2003 with a two-year-old daughter in tow and strong reservations regarding the information being disseminated about the development. Today they have two children in school and the bittersweet satisfaction of believing that their reservations were right.

“It was just really clear that the true story wasn’t coming out in any public way,” said Hawley. “To document how this could take place kept us going, and the fact of validated what Daniel and Develop Don’t Destroy had to say also drove us because it was like no one knows the truth. Our film can actually give them some validation, which you’re not supposed to do that in a documentary, but when it’s so clearly lopsided and you only hear the developers narrative forever, it really became important to us to tell another narrative of the story.”

In The Footprint: The Battle over Atlantic Yards
In 2007, Steve Cosson, the artistic director of The Civilians, an investigative theater company in Fort Greene, received a $150,000 grant from the Rockefeller Foundation to develop In The Footprint: The Battle Over Atlantic Yards. The result was a 95-minute play set to music composed by Michael Friedman, which originally opened at the Irondale Center in Fort Greene in November 2010 and premieres in Philadelphia later this month at the Annenberg Center.  It’s best understood as a series of monologues and songs that derive from over 100 interviews with residents, business owners, community activists, politicians and students including Goldstein and borough president Marty Markowitz completed by the troupe from 2008 to 2010. The show garnered a positive review from New York Times theater critic, Charles Isherwood when it opened.

“As I was learning more about what was happening with Atlantic Yards, I thought it was really emblematic of how our society works now,” said Cosson. “How powerful alliances, private corporate interests and politics and government are. I was interested in what happens when that alliance comes up against a neighborhood, and what happens when those norms are changed.”

The Street Singer
Several of the writers who have most obsessively chronicled the AY conflict are now turning the experience, and expertise, into book form. Norman Oder, the author of the blog Atlantic Yards Report, is working on a non-fiction tome about the project. Stephen Witt, a writer and AY-reporter for the Brooklyn Daily blog, is currently fine-tuning what he says is the seventh of eight drafts of The Street Singer, a satirical novel about AY and the artistic community of Brooklyn. He plans on self-publishing it in June if it fails to find a publisher before then and calls his work a roman a clef of his early life as a street musician in the city, re-set in the six months leading up to the arena’s ground breaking.

“I think it works really good as a satire,” he said. “A lot of journalists and artists really beat me up over my coverage of Atlantic Yards. I think history will show I covered it right.” When asked whether he’s capitalizing on the situation with the Barclays Center set to open in September, his response was succinct.  “Absolutely,” said Witt. “It’s a timely novel. I am definitely capitalizing on it. It’s timely. It’s a news angle. I’m capitalizing on it in the same way [Jonathan Safran Foer] capitalized on the World Trade Center with Extremely Loud and Incredibly Close.” He added, “Dostoevsky used to take ideas from the newspaper. My say is as good as anyone else’s say.”