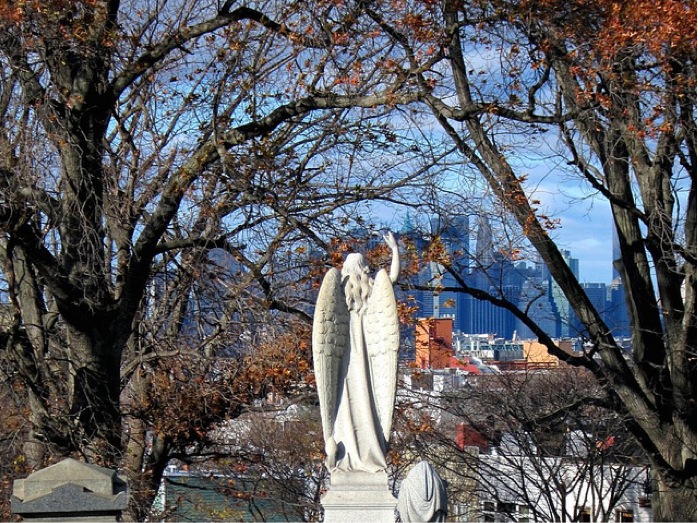 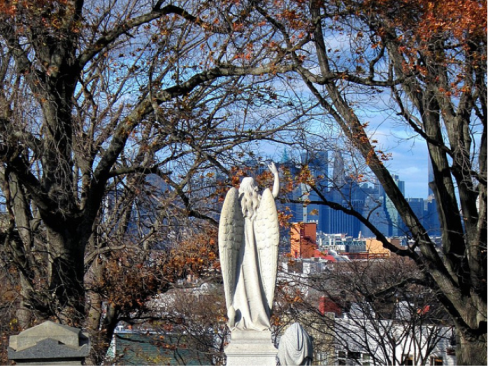 This stone angel has an eternal view of Manhattan.

Green-Wood Cemetery existed before there was a Metropolitan Museum (founded in 1870), a Central Park (created in 1857), or a Prospect Park (proposed in 1859). When it opened its Gothic gates in 1838, Green-Wood was where artists wanted to exhibit their work and the public wanted to picnic.

The cemetery was built in response to Manhattan’s rotting corpse problem–as the population density in New York grew in the early 1800s, churchyard cemeteries changed from small burial grounds into festering eyesores. The overflowing layers of rotting corpses were a public health hazard, and yellow fever and other outbreaks not only contributed to the unmanageable number of dead, but were also suspected of originating in the cemeteries themselves. City planners looked outward, across the river, to the then unused farmland in Brooklyn and imagined an alternative to the putrid, cluttered church cemeteries in Manhattan. The plan wasn’t just a dignified dumping ground for the deceased, but also an oasis of peace that reflected the Victorian ideal of a beautiful death.

Green-Wood Cemetery now rolls over 478 acres of South Brooklyn with over 560,000 graves, stretching from 20th Street to 37th Street between 5th Avenue and Fort Hamilton Parkway. Visitors enter under a Gothic arch designed by Richard M. Upjohn and built in 1861 with New Jersey Belleville brownstone. The arch’s spires (now inhabited by a colony of green monk parrots) give the impression the you are passing through a cathedral façade as you enter the cemeteey. Paths curve off from there and wind around mausoleums and statuary designed by great American sculptors like Augustus Saint-Gaudens and Daniel Chester French. Groves of trees and rolling hills left by the glacier that covered New York over 18,000 years ago contribute to the feel of an idealized rural landscape.

As the first rural cemetery in New York City and its most elite, Green-Wood was and still is, for many, the place to be buried. In addition to the graves of celebrated figures like DeWitt Clinton, Horace Greeley, Boss Tweed and Leonard Bernstein, here are three notable, and permanent, Brooklyn residents: 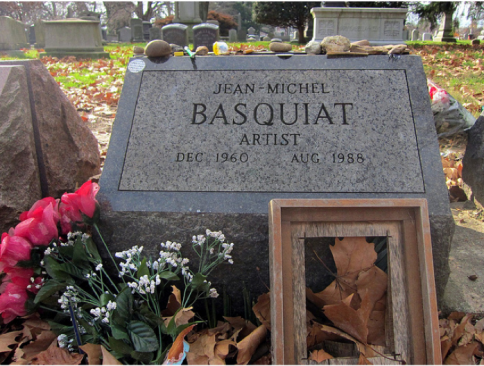 Jean-Michel Basquiat
Drugs, as well as heartbreak following the death of his friend and collaborator Andy Warhol, helped to extinguish the quick flame of Brooklyn-born artist Jean-Michel Basquiat, who died at just 27 years old in 1988 from a heroin overdose. He was buried at Green-Wood Cemetery with a small family funeral, his unremarkable tombstone blending into a long row that stretches through one of the less visited sections of the cemetery. While the grave itself lacks the animated character of his vivid, graffiti-inspired paintings, visitors often leave art supplies along with flowers and handwritten notes. 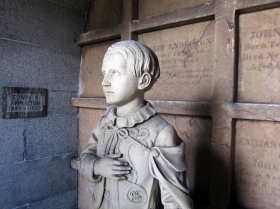 This statue sits inside John Anderson's mausoleum in Green-wood Cemetery.

John Anderson
Perhaps in his grand mausoleum with its heavy Roman columns the tobacconist John Anderson is finally at rest. His final years were troubling ones, as he claimed to be haunted by the ghost of his late employee, Mary Rogers. Anderson hired the pretty young lady in 1838 and paid her lavishly to work and attract customers to his shop on Broadway across from City Hall. She went missing that same year, only to turn up soon after (she reportedly went to visit a friend in Brooklyn, but had left a suicide note) with some suspecting it was all a hoax by Anderson to get more attention for his store. In 1841, Rogers disappeared again, and this time she turned up floating in the Hudson River. Although Anderson, who was obsessed with Rogers, was one of the top suspects for her murder, no one was ever convicted in the death of the “Beautiful Cigar Girl,” as she was nicknamed by the press, who avidly covered her mysterious murder. Anderson died in Paris of pneumonia in 1881, suffering from visions of her ghost, and Rogers’ fate became the inspiration for the Edgar Allan Poe story, “The Mystery of Marie Rogêt.” 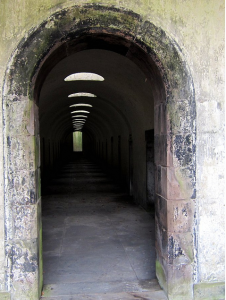 The Green-wood catacombs where social climber Ward McAllister is buried.

Ward McAllister
Like Rome and Paris, New York has its own catacombs, although they are more of an extended mausoleum than skeleton-lined tunnels. The desire to be buried above ground, both because it was fashionable in the 19th century and because there was a rampant fear of being buried alive, led to the creation of the catacombs in Green-Wood Cemetery, an affordable option for those who could not build their own mausoleums. Thirty vaults line a corridor built into a hill, with creaking metal doors opening to walls of tombs dimly lit by small skylights.

The most famous person to be buried in the catacombs was Ward McAllister, who established himself an arbiter of New York high society in the mid- to late 19th century. He kept a list, known as “The Four Hundred” (conveniently the number of people who could fit into the Astor’s ballroom), whom he considered to be the best of New York, yet he himself was always financially on the fringes and died out of favor after publishing his unpopular book, Society as I Have Found It. While the families he mingled with take their eternal rest in prestigious marble monoliths, McAllister had to settle for being, at the end, among the middle class.

The Green-Wood Historic Fund regularly offers trolley tours that highlight the cemetery’s history, and the catacombs are sometimes open for special events. For a slideshow of photos from Green-Wood, visit our blog.