Our new weekly column by Brendan Spiegel digests the latest and greatest eats across Kings County. This week we’re counting down the 2012 food and drink newcomers we’re looking forward to most. 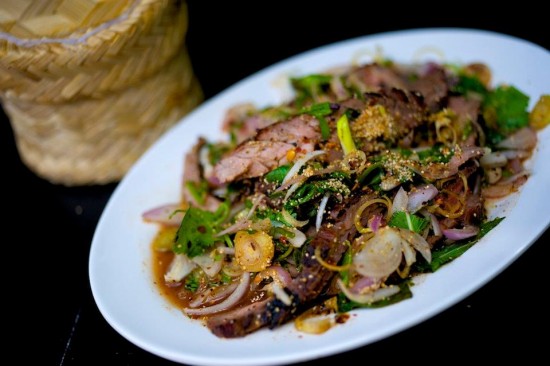 The eponymous South Park Slope restaurant from Top Chef alum Dale Talde only ranks so low on our anticipation meter because it actually opened its doors this past Sunday. Still, the refined-meets-ridiculous menu—oyster and bacon pad thai; potato chip and salted ganache cookies—and the early reports on Eater make this Filipino-influenced spot one of the places we’re most excited to try in 2012. 369 Seventh Ave., taldebrooklyn.com

As much as we love Tyler Kord’s inventive No. 7 restaurant in Fort Greene, we were always a little hurt that he chose the inner borough for his even crazier No. 7 Sub. Fortunately, all is forgiven now that the sandwich shop is expanding with a second location in Greenpoint, where a larger space will allow Kord to pair far-out sandwiches—filet-o-fish with refried beans, muenster and pickles—with equally exciting cocktail creations like a sriracha-tequila-maple-lime concoction. No. 7 Sub Greenpoint is expected to open this week, possibly by the time you read this. 931 Manhattan Ave., No7sub.com

Yes, the idea of a shop selling only small-batch, gourmet mayo made in seasonal flavors sounds like something out of a Portlandia skit. But all joking aside, we’re pretty positive Brooklyn can support an outlet hawking sandwich spread that comes in varieties like lime pickle, foie gras, black garlic and fermented black bean. Previously available at Smorgasburg and the Flea, Empire Mayo’s Prospect Heights brick-and-mortar store has been held up by permit issues, but they hope to open in mid-February. 564 Vanderbilt Ave., empiremayo.com

If you needed more proof that Crown Heights is Brooklyn’s best new eating and drinking quarter (thirstbaravin, Chavela’s), the team behind Park Slope’s eternally popular Al di Là is launching a spinoff on Washington Avenue. Bar Corvo will be a more relaxed counterpoint to that upscale trattoria, offering items from Al di Là’s comforting Venetian menu, along with some new bites and an expanded roster of draft beers. The owners hope to open on January 25. 791 Washington Ave.

Laid-back, creative chef Harold Dieterle has always struck us as the food TV star most suited to Brooklyn. Later this year, the Perilla and Kin Shop toque (and Top Chef season one champ) will make his first foray into Kings County with The Marrow, a German-influenced New American spot offering high-end fare like bison carpaccio with wild rocket, gooseberries and miso dressing. The Downtown location, in a new hotel on Duffield Street, is rather random, but a promised rooftop terrace could be a prime perch to take in city views. 231 Duffield St., hotel718.com

The owners of Southfork Kitchen, the seasonal Hamptons spot (and star of the New York Times’ Start-Up Chronicle blog), will branch out this spring with a new Carroll Gardens restaurant, also to be run by chef Joe Isidori. Named to evoke the old-school Italian world of Arthur Avenue in the Bronx, the new Smith Street spot will offer classic Italian fare spiced up with local, sustainable ingredients like Hudson Valley guinea hen and La Quercia speck. 276 Smith St.

When it comes to restaurants, there aren’t many things New York doesn’t have, but a serious seaside crab shack is one of them. The owners of this ambitious new restaurant are being coy about details, but from the looks of the massive building rising in Red Hook, Brooklyn Crab could be a summertime game changer. Scuttlebutt says the venture will include a giant deck overlooking New York Harbor, a menu of Atlantic Coast seafood (including, of course, crab), an extensive raw bar, and maybe even mini golf. 24 Reed St., brooklyncrab.com