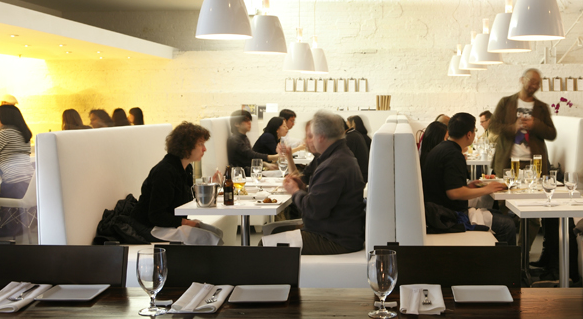 We’ve always found that the most romantic dining moments happen over burgers at the bar on a Tuesday evening, or in that new little place that just opened up–where you don’t run into anyone you know. So we asked in-the-know couples from around Brooklyn for their favorite everyday spots for romantic dining, no occasion needed, no special menu required. A few themes emerged: Noodles, eating at the bar, late-night dining. Of course, these are just a handful a sweet nooks around Brooklyn, add your favorites in the comments.

Tina Fallon, creator of “The 24 Hour Plays,” real estate agent, and wife of former New York Times dining critic Sam Sifton, described their standing date night spot in a poetic email to us: “Dinner at the bar at The Good Fork--watching the kitchen hustle and the bartenders bustle while downing a couple of burgers and Red Hook Coolers (like a cross between a Tom Collins and a mojito). Thinking you’re going to order something else but always getting the burger in the end. Sharing a chocolate bread pudding for dessert. There is something about eating at the bar that hearkens back to our early days, um, drinking at the bar. Thirteen years ago we celebrated our engagement over chicken wings at a long-defunct bar on the Williamsburg waterfront. We still have our best conversations side by side. 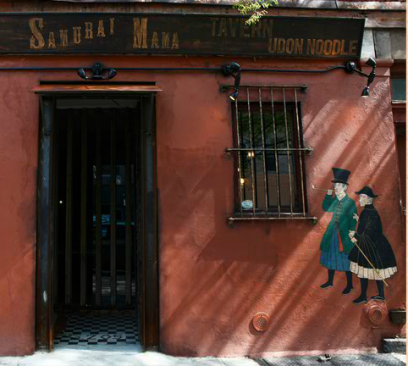 Samurai Mama bills itself as a noodle tavern.

Anna Dunn, editor of The Diner Journal and Katy Porte, a real estate agent who has worked at The Commodore, Roebling Tea Room and No Name Bar, seem to know everyone in North Brooklyn. They head for noodles when they want a meal to themselves. Dunn asked: How would two 30-year-old lesbians resist a place as subversively named as Samurai Mama? Or for that matter, something that refers to itself as a “noodle tavern?” My wife Katy and I go there to sit in the elevated booths, drink Sencha tea, which I categorically deny enjoying but secretly covet a cup, plot the week, and evaluate the endless to-do lists crumpled up in our pockets. Here, in between multiple orders of gyoza, is where we planned our wedding, decided to adopt another dog. When we run into a friend it remains a quiet affair. Mama, and I thank her for it, remains more meditation than celebration.

The dining room at 1 or 8 is miminalist, comfortable and intimate.

Erin Gerken and Zeb Stewart, two of the owners of Cafe Collette and Hotel Delmano (Stewart is also an owner at Union Pool) have also made noodles their go-to for a quiet moment after a frenzied day. Gerken wrote: Zeb and I are always looking for a great bowl of ramen.  A little known neighborhood secret, (in South Williamsburg) is the late night menu at 1 or 8.  They serve a DELICIOUS bowl of ramen, along with other tasty treats, starting at midnight on the weekends…perfect for restaurant folks!  It’s such a nice reward to go there after a busy Friday or Saturday night.  This is one of our favorite restaurants anyway, their sushi is some of the best we’ve had in the city, but the late night bar menu feels like a more casual version, and is definitely an added treat! 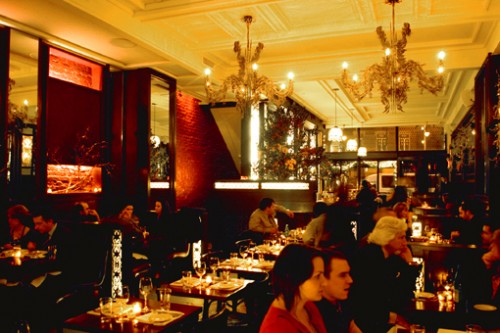 Restauranteur/chef Craig Samuel, co-owner of Peaches, Peaches HotHouse and The Smoke Joint, has spent many a night with his wife at the usual suspects for romantic meals out: Al di La, Palo Santo, The Good Fork and closer to home, Saraghina and Sud. But when pressed to pick one, his wife reminded him that the most romantic restaurant in Brooklyn that he’d ever taken her to was Dressler, in Williamsburg. He quickly agreed. “It’s really one of the most beautiful restaurants in New York,” said Samuel. “I love all the ironwork, the bar stools and the bar, and my wife thinks that the dining room looks like an updated, Brooklyn version of Gramercy Tavern.”

Dara Furlow, creator of With Love, From Brooklyn and a mom to three, praised Saraghina as her to-go spot for family celebrations and date night alike. She wrote: Saraghina is a secret romantic hideaway in the ‘hood.  The crowd is mostly locals, with tons of kids and families early-on seguing to younger couples and boisterous groups of friends later in the evening, so going after 8 is essential if you want to feel sexy. Candlelight is the main source of illumination in the evening, making Saraghina the ideal spot for cozying up to my sweetheart. The real thrill for a mom of three is lingering over vin santo and biscotti with no little voices clamoring to be set free into the Bed-Stuy night.