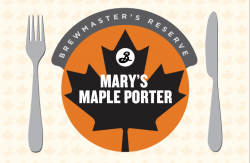 Every four months, Brooklyn Brewery releases a small batch of Brewmaster’s Reserve beer that you can find at select bars and, if you’re lucky, taste at one of the brewery’s private release parties. But this month, Brewmaster Garrett Oliver’s latest concoction, which was made in their original 25-barrel brewing system in Williamsburg, is going to be celebrated at a party that everyone is invited to–an all-you-can-eat “Brunch Spectacular” on Saturday, February 25 from 10 am to 2 pm.

The guest of honor: Mary’s Maple Porter, named after Mary Wiles, Quality Control Manager at the F.X. Matt Brewery in Utica, where Brooklyn Brewery’s 12-ounce bottles are born (and the second oldest brewery in the U.S. #interestingfactoid). Not only is Wiles one of the country’s few female brewmasters, she’s also a scientist who can predict the stability of a beer AND she produces maple syrup from the 500 acres of maple trees her family owns upstate. So she’s a basically badass, maple-syrup making beer geek, which makes her an honorary Brooklynite in our book.

Fifty gallons of her syrup went into this special porter, which will be on tap at the brewery through April, and flowing freely at the brunch on Feb. 25 along with Wafels & Dinges sublime Belgian waffles, bacon galore, and of course, Mary’s syrup. The $35 tickets include:

Check out Garrett’s tasting notes on Mary’s Maple Porter and then snatch up tickets here.