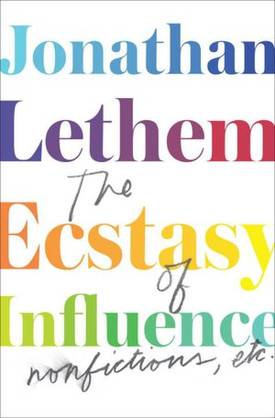 He is known first and foremost as a top-notch novelist, and may that never change. But in another quadrant of his brain, Jonathan Lethem (Motherless Brooklyn, Chronic City, The Fortress of Solitude) has produced a whole lot of quality non-fiction. The proof of it stares you in the face with every page you turn in The Ecstasy of Influence: Nonfictions, Etc., his latest book of collected essays, reviews, profiles, humor pieces, etc. In it, he devotes his subdivided attention to all sorts of things pop-cultural.

Partly criticism, partly memoir, wholly compelling, this collection runs the gamut of the world according to Lethem. Rearranged in roughly chronological order, Lethem’s subjects include:

His enduring nostalgia for his adolescent love affair with comics, especially the ‘60s Marvel of Spiderman, the Hulk, and the Fantastic Four… His would-be-adult teen years and then his early post-college days, both spent happily toiling in used bookstores… His brief college friendships with fellow future literary lights Brett Eason Ellis and Donna Tartt… His adventures hitchhiking cross-country as a temporary college dropout… His love of, and dabblings in, his favorite genre, science-fiction, with special shout-outs to Arthur C. Clarke, J.G. Ballard and Philip K. Dick. Especially Philip K. Dick. Lethem is all about Philip K. Dick. He is so all about him that, in addition to his PKD essays here, he has also co-edited a recently published collection of Dick’s writings, entitled The Exegesis of Philip K. Dick. I’m going to go ahead and call him America’s foremost expert.

Along with Lethem’s big ideas and recurring themes, the book is also sprinkled with what I call little bits and pieces–including some rather naughty bits and some pretty witty pieces. I’m thinking of “Give Up,” his coolly droll mash note to planet Earth from next door neighbor Mars, and also “Holidays,” an annotated list of real and imaginary occasions, among them Easter (“Each year, the warm-blooded species hold a week-long festival to honor the passing of giant lizards, who ruled the earth for so many thousands of years.”) and April Fool’s Day (“April fools are no worse than October fools or May fools, yet we hang them in effigy from lampposts, and children construct tissue-paper voodoo dolls of April fools to flush down the toilet.”)

Among the other such spurts of wit and whimsy in this collection, I especially enjoyed “Godfather IV,” a flight of fancy that playfully suggests what a fourth Godfather film would have to include in order to be worth making–or watching (Lethem wants to see how Michael earned his war medals, and just how Fredo spent his time in Vegas). Another personal favorite: “The Drew Barrymore Stories,” made-up anecdotes that feature Lethem and Ms. Barrymore hanging out with the likes of Ernest Hemingway, Alfred Hitchcock and Miles Davis. The absurdist dialogues that ensue have the feel of early-to-middle period Woody Allen–not so much the Woody the filmmaker as Woody the New Yorker humorist and stand-up comic.

But Lethem has plenty to say about other films and filmmakers. Some of it I am totally down with, especially “Great Death Scene: McCabe and Mrs. Miller.” We both agree that A) There are not one but two great death scenes in this inspired Robert Altman anti-Western, and 2) The whole film is one long, grittily gorgeous, hauntingly elegiac death scene.

And then there is one of the rare Lethem assertions with which I don’t agree at all. Oddly enough, it’s about another Western, The Missouri Breaks. Lethem complains that Marlon Brando’s antic, multiple-personality performance as a prairie psychokiller-for-hire all but undid the legend that is BRANDO. Not to mention what it did to the movie itself. The problem with that thesis is that Missouri Breaks would have been a stolidly serious, unremarkably respectable re-take on genre conventions had it not been for Brando’s admittedly hammy hijinks. So it’s not as if Brando was trashing a potentially great work of art. And anyway, come on: One self-indulgent, show-offy, disturbingly entertaining bit of virtuosity erases the indelible mark Brando left with The Wild Ones, A Streetcar Named Desire, On the Waterfront, The Godfather, and Last Tango in Paris? And others? Nope, not buying that. From my viewpoint, the legend is still standing, alive and well.

I’m more completely on board with Lethem when it comes to pop music, especially his deeply appreciative interview with Bob Dylan, his jokey deliberations on who most deserves to be known as “The Fifth Beatle,” and his extremely persuasive treatise on the genius of James Brown. I single that one out because, though I’ve always been a big fan of James Brown, I have never really thought of him as a “genius.” Not until I read this. Now I see the light. And no small part of what convinced me was this observation:

“…Brown seemed less a musician with an imperative either to entertain or to express his own emotional reality than one driven to push his musicians and listeners to the verge of a sonic idea, and then past that verge, until the moment when he became more or less officially the creator of an entire genre of music called funk…”

I think that pretty much nails it, on the subject of James Brown.

But I haven’t even gotten to the real meat of Lethem’s collection–such as “Nine Failures of the Imagination,” his meditation on 9/11 and his attempt to come to grips with it, in the days after; “Advertisements for Norman Mailer,” in which he wrestles with the disconnect between his early hero worship and later disillusionment; and this book’s title essay, a boldly challenging dissertation on what it means to be plagiaristic in the age of Internet babble and Hip-Hop samples, if anything anymore is truly original, and how much that matters. All of which is expressed in 28 pages worth of seamlessly stitched together quotes, passages and proclamations that Lethem has mischievously borrowed from other published thinkers.

The essay, originally published in Harper’s in 2007, kicks ass, on a slippery subject. It also sheds a new light on all the other subjects in this book, and how Lethem relates to them–as artist, critic, colleague, and fanboy. And on that note, I’m going to move on, because there is still more.

Elsewhere here, Lethem writes about the long haul of book tours, expounds on fellow writers from Chesterton to Nathanael West, argues for the staying power of post-modernism, defines what makes great rock singing great and ruminates, over several essays, about his on-and-off hometown of Brooklyn: Of growing up here. Of leaving it behind as a young man going West. And, of course, of never quite being able to really leave it behind.

By the time I got to the end of this book, I began to wonder if there was a pop-culture permutation that Lethem could not hold forth about. The more I thought about that, the more impressive it seemed. But what really impresses is not the breadth of his knowledge, but the depth of it. Across the board. 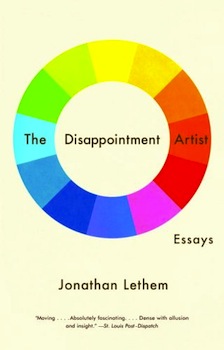 Reading The Ecstasy of Influence made me want to seek out Jonathan Lethem’s first collection of essays, The Disappointment Artist. I was not disappointed. Here we can see much of the eclecticism–including several of Ecstasy’s main themes–already in full blossom. And yet reading more about many of the same subjects doesn’t feel redundant. Lethem doesn’t repeat himself. In each essay, in each book, the insights and observations are new. They add to the overall discourse. The essays, and the books, complement each other. I actually don’t think it matters which you read first.

And so it was with pleasure that I revisited the Brooklyn of his childhood (“Speak, Hoyt Schermerhorn” recounts the colorful, sometimes violent history of the Hoyt-Schermerhorn subway station and the surrounding neighborhood, and is must-reading even if you don’t live on this side of the river); his pantheon of pop music artists (including Dylan again–or rather, firstly); his thing for Marvel comics (here, interwoven with portraits of complicated friendships with the boys with whom he shared that comic-book love) and his even bigger thing for science fiction–firstly, Philip K. Dick of course, but also Star Wars (which he saw 21 times in the summer of 1977) and Stanley Kubrick’s 2001: A Space Odyssey, one of two Kubrick films that blew him away when he first saw them, and which he still considers great. The other one: the much-overlooked Barry Lyndon–which gets its own little valentine in the second part of the 11-part essay, “The Beards.”

As a longtime film buff/scholar/critic who has seen 2001 and Barry Lyndon combined almost as many times as Lethem has seen Star Wars, I have to agree with him that both Kubrick films are great. Magnificent even. But I do wonder what it was about Kubrick’s A Clockwork Orange that left Lethem, well, disappointed. He doesn’t elaborate. But in any case, I don’t agree with him on that. It’s one of the few issues on which Lethem and I don’t see eye to eye.

We do however share the same ambivalences about John Ford’s flawed masterwork The Searchers (yet another Western). Like Lethem, I still kind of cringe at some its clunky performances, its repeated breakings out into song, its often corny humor and most of all, its portrayal of the Native American villains as raping, pillaging savages. And yet we still both feel the need to stick up for the film, as Lethem does (ambivalently) in his opening essay “Defending The Searchers.” But here, again, we differ, to a degree: I have always seen this film’s protagonist, John Wayne’s avenging Ethan Edwards, as a hardened, embittered man whose racism, is, in large part, what makes this frontier epic so darkly unsettling. I have never considered the film itself racist. Lethem isn’t so sure about that. I get his point–but he didn’t change my mind.

But “Defending The Searchers” did get me thinking about the film more deeply than I had in a long time. And Lethem’s more appreciative critiques of John Cassavetes, Ernie Kovacs, Nathanael West–and, of course Brando, Kubrick, Altman and James Brown–had a similar effect. As did most of the essays in both books. Whether they dealt with subjects I knew well or introduced me to new ones, most of these pieces, one after another, gave me pause to reflect, and form my response, in my (mostly) silent dialogue with the author. That’s what good essays do. But Jonathan Lethem’s very good essays don’t just engage your intellect. They also amuse. They entertain. Reading them is actually fun.

Serious discourse that also makes you laugh: You can’t ask for more than that. At least I can’t.

Michael Sauter is a Brooklyn-based arts and entertainment journalist who has written about books for such publications as Entertainment Weekly and Publisher’s Weekly. He still hasn’t ruled out writing the Great American Novel, but isn’t holding his breath.