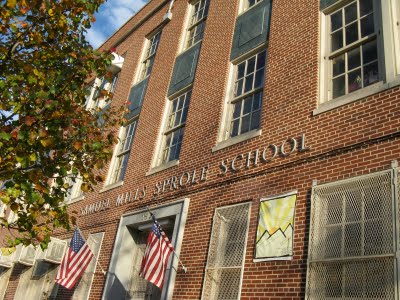 While on a school tour last November at PS 110 in Greenpoint, I spotted Joyce Szuflita taking copious notes, which, if you’re obsessed with Brooklyn public schools, is like a finding yourself at a dinner party with a doctor who can diagnose you on the spot. Even without attending one of her popular workshops on how to figure out the public school admissions process (next series starts Monday Feb. 13, tickets available here), I recognized her from her posts on A Child Grows. So I asked her what she thought about the school. All it needs, she told me, is better lighting, some colorful murals and a larger active parent body. I also realized, afterward, that she would have some insight into other, under-the-radar schools worth looking into. (Not that 110 is little known. In her mind, everyone already knows about PS 10, PS 11, PS 84, PS 295, and PS 110, though I didn’t.) The longtime Brooklyn mom, whose college-age daughters graduated from top public high schools, considers three factors when picking stand-out schools: “a talented principal, a staff that is supporting each other and working well together…and ideally active parents who are willing to support the school with time and treasure.”

Here six elementary schools that deserve more buzz, according to Szuflita. (Just call ahead to confirm and register for tours–not all schools allow you to just show up.)

PS 196 in Bushwick/East Williamsburg (PreK-5)
“Another school in District 14 where I love the principal and teaching staff and which really just needs the attention of families is 196 in East Williamsburg. I think they are a tremendously talented staff doing wonderful things in anonymity. I love 196.” 207 Bushwick Ave., between Meserole and Scholes, 718-497-0139 Next tours: Call and schedule an appointment with parent coordinator Maria Rodriguez.  Stats via SchoolBook»

Ethical Community Charter School in Bed-Stuy (K-3)
“I think that people should tour Ethical Community,” says Szuflita, which is in the southern part of District 14. “It’s a relatively new program but it also has a terrific staff. It’s growing into an interesting, progressively focused program.” Though they’re not in a partnership with Fieldstone in the Bronx, they are using the private school as their model. “They’ve done some staff development around the same model…looking at the whole child, emotionally, ethically.” They’re currently a K-3 program, with plans to expand to K-8 ultimately. 700 Park Avenue between Tompkins and Marcy, 718-599-2176. Next tours: Feb. 8 at 5:30pm, Feb. 9 at 12pm, March 8 at 9am, March 29 at 9am and 5:30pm. Stats via SchoolBook»

Community Partnership Charter School in Clinton Hill/Bed-Stuy (K-8)
Located in District 13 right by Pratt is Community Partnership. Says Szuflita, “They are a lovely and strong charter that has a K to 8 program. A lot of attention is paid to Community Roots but this is another nice option.” 241 Emerson Pl. between Classon and Grand, 718-399-3824 Tours: Feb. 16 at 6pm, March 6 at 9am, March 15 at 6pm March 24 at 10am. Stats via SchoolBook»

PS 133 in South Slope/Gowanus (PreK-5)
“PS 133 is getting a lot of attention because of their dual language French program, and they’re having a new building built on 4th and Butler that they’ll be moving back into in 2013,” says Szuflita. When they do, the 300-seat school will jump to 900 seats, and “they just announced that they are starting up a dual language Spanish program as well.” And note, despite the location, it’s technically a District 13 school, and the junior high will be in the same building. there will be another school in the building, TBD.
211 8th St. at 4th Ave., 347- 563-5321. Tours: Call parent coordinator Ahmed Dickerson to arrange a tour. Stats via SchoolBook»

PS 32 in Carroll Gardens (PreK-5)
“I think that interesting things are happening at PS 32. They have some beautiful enrichments there…and a brand-new gifted and talented program that just started in fall 2011.” And just because PS PS 58, PS 29 and PS 261 are the more coveted neighborhood schools, that’s no reason to overlook this one. “They’re next door to very popular programs and living in obscurity,” says Szuflita. “Just because there’s no buzz about a school doesn’t mean there aren’t wonderful things happening there.” 317 Hoyt St. between Union and President, 718-330-9295. Tours: Pre-K tours are Feb. 28 at and March 27 at 9; Kindergarten tours are Feb. 16 and March 22 at 9:30′ ASD tour is April 3 at 9 am and Gifted and Talented is March 7 and April 16 at 9am.  Stats via SchoolBook»

Lefferts Gardens Charter in Prospect Lefferts Gardens (K-5)
While this school is “very well-known in the neighborhood” those outside the area may not know that this is a “new progressive, hands-on, science-focused school with a partnership with Prospect Park and Brooklyn Botanic Garden.” 601 Parkside Ave., between Rodgers and Bedford,718-284-2093; Tours: Feb. 14 9am, Feb. 28 at 6pm. Stats via SchoolBook»