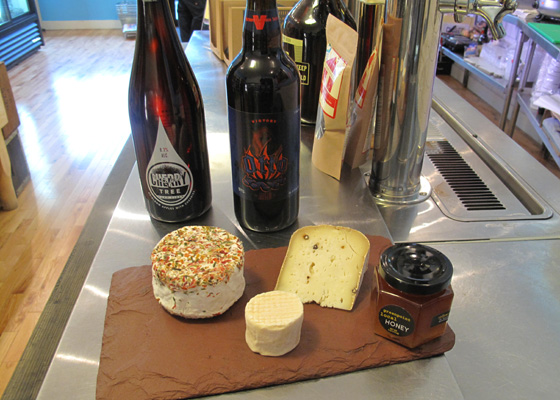 Maybe you read Cocoa Mojo, our Valentine’s Day chocolate round-up and thought, “Too bad sweets just aren’t for my sweet.” Eastern District can help. The cheese, beer and specialty store in Greenpoint has everything you need for a salty, creamy, spicy Valentine’s Day. Beth Lewand, who owns Eastern District with her husband, Chris Gray, put together a few themed cheese plates for us, perfect for a super-savory sweetest day of the year. If you want both cheese and chocolate, they carry many of the chocolates we profiled, including Nunu, Liddabit, Raaka, Mast Brothers and Tumbador, as well as all the beer and pairing items suggested below. 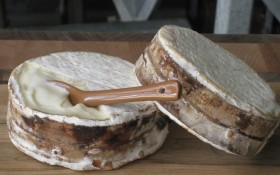 Eat Harbison up with a spoon.

Super Creamy
Usually cheese plates are designed around variety mixing up both flavors and textures, but for Valentine’s Day you may want to go one-note, all lush and creamy on the texture tip. Lewand recommends Harbison, a bark-wrapped charmer from Jasper Hill that you can scoop directly into; Cremont, a double-cream goat-and-cow’s-milk cheese from Vermont Butter and Cheese; and Nettle Meadow’s Kunik, another goat-and-cow-combo that was once called, “The sexiest cheese in America,” by Esquire magazine.
Serve with: Strawberry Balsamic jam from Anarchy in a Jar and Raincoast Crisps, salty-sweet-crunchy crackers. The Cranberry Hazelnut flavor are especially good for creamy cheeses. To really go for it, get a package of Whimsy & Spice marshmallows as well.
Beer suggestion: Original Sin Cherry Tree, an apple, sour cherry cider that Lewand calls “pretty awesome.” 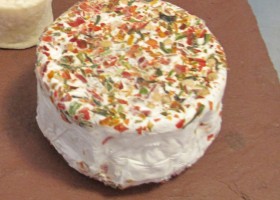 Heat things up with Devil's Gulch.

Nice and Spicy
Although cheese isn’t inherently spicy, generally, Eastern District has a few options that will turn up the heat. Devil’s Gulch from Cowgirl Creamery is hands down the prettiest cheese in the shop, with its bloomy white exterior and red and green dried chilis sprinkled on top. “I don’t need chili peppers on my cheese,” said Lewand, gesturing at the Devil’s Gulch, “but how can you say no to this?” Add some Pepato, a firm, salty Italian sheep cheese studded with black peppercorns and a spicy-creamy blue like Crater Lake Blue from Rogue Creamery, and you’ve got an eclectic, and beautiful cheese plate.
Serve with: Greenpoint Honey–the sweetness will counterbalance the spice.
Beer Suggestion: Otto Ale by Victory Brewing, a smoked beer that Eastern District just got in, for a flavor explosion. To rein it all in a bit, go with Brooklyn BAMBoozle the BAM-Brooklyn Brewery saison-style ale made for BAM’s 150th anniversary. 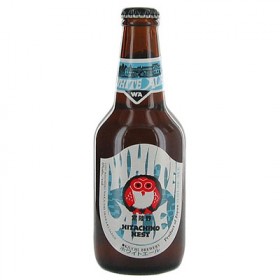 Hitachino, the cutest beer in all the land.

The Cuteness
Pair these small, individual cheeses for a tiny, cute plate. Start with Schloss, a creamy square from Marin French Cheese, which Lewand described as “bacon-y.” Add a Bijou, a little goat crottin from Vermont Butter and Cheese to the mix. Then finish with a deliciously moldy, densely creamy Wabash Cannonball from Capriole Farmstead Goat Cheeses. “Some people are turned off by the exterior mold on these,” Lewand explained, “but I find them gorgeous.”
Serve with: Chocolate-covered figs and Ovenly Maple Thyme Pecans.
Beer Suggestion: Cans, for sure. Sixpoint‘s new double IPA, Resin will add plenty of hoppy bitterness to the mix. Or, stay cute and go for Hitachino White beer, which is both delicious and adorned with an owl.