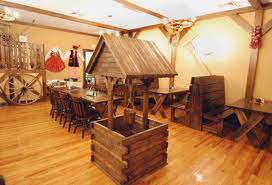 Make a wish, for more pierogies, at Karczma's.

Did you read Elevated Street Meat? Here’s an old school option for a meaty menu on a budget, it’s definitely not organic, but it is seriously local. Long before north Brooklyn was swinging with hipsters and busloads of Scandinavian tourists, it was inextricably linked to Polish culture and food, a cuisine in which pork is the default vegetable. To sample, head up just past McCarren Park to Lomzynianka. Slavic standbys such as kielbasa and breaded pork chops come out at $6 and $6.50, respectively, served alongside a vegetable and mashed potato. The more adventurous can opt for tongue in horseradish sauce, $7; the more skint (or vegetarian) a plate of pierogies for $5.50. In addition to the ground pork-filled variety of pierogie, there are farmer’s cheese, the “Russian-style” cheese-and-potato, and a sauerkraut-and-mushroom stuffed one, which, drenched in butter, is the closest thing to vegan cuisine as it gets here.

Just a G train stop away, Karczma’s homemade bacon, streaked with far more white than pink, draws in the Greenpoint Avenue crowd with its acclaim: the Village Voice once dubbed the porcine product “Best Bacon in NYC.” Since it isn’t sold on its own, split one of the grilled plates for two, $22, which has enough food for three ravenous eaters. Also on that bill of fare are chicken breast, ham, kielbasa, salmon and kiszka, or blood sausage. Nose wrinkling shall be rewarded with a defiant eye roll. Given that there really isn’t a mass demand for some of this stuff, the sausages used at these joints are generally made in North Brooklyn proper—more local than that Trader Joe’s bag you hauled into Williamsburg.