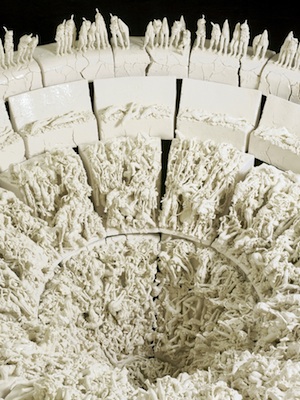 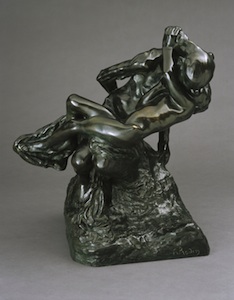 "Youth Triumphant" by Auguste Rodin (1896; cast date unknown). One of the 15 iconic works by Rodin selected by Rachel Kneebone from the Brooklyn Museum's collection for her current exhibition, "Regarding Rodin."

A master such as French artist Auguste Rodin (1840-1917) could never be accused of lacking dramatic flair: in his work, he cast the darkest of human emotions into monumental bodies of bronze. Anyone who has spent time wandering the atrium of the Brooklyn Museum surely knows this. It’s difficult to look at Orpheus (1908), in his twisted, mythic agony, without feeling the atmosphere suddenly weigh heavier upon you. But on the third floor of the museum, another artist with a taste for unbridled drama just might be giving him a run for his money.

“Rachel Kneebone: Regarding Rodin” presents the Brooklyn Museum’s rather remarkable collection of Rodins alongside eight large-scale works from Rachel Kneebone, a contemporary British artist. Kneebone has carved out an anachronistic niche for herself in the art world, making porcelain contort in ways that it hasn’t done since the era of the Baroque. She often cites Rodin as chief among her stylistic influences, and so her first major museum exhibition is a chance to see her work against his own.

Yet a black and white comparison simply won’t do. Though both bodies of work speak through the human form, the story each artist weaves is dramatically different. Rodin’s is one of mortality, intrinsic suffering and outward grace. Kneebone’s is violently explicit. Her sculptures wail, rather loudly, of sex, death and disembodied ecstasy.

From afar, many of the works look like wedding cakes: spotlessly white and layered into tiers. But lean forward, and see carnage cannibalizing itself. What drips down the side of each layer is not ivy, but thorns intertwined with flailing legs. Torsos are bandaged as if the whole body is a wound, and heads, when they are there, are replaced with screaming vulvas. If this sounds terrifying, then I’m describing her work well.

Perhaps the most frightening (and ambitious) of all is The Descent (2008), her largest work to date. A visual ode to the rings of stratified suffering outlined in Dante’s Inferno, and an allusion to Rodin’s The Gates of Hell, the inside of the work is a chaotic world of tangled human extremities. Kneebone’s dexterity with porcelain is especially adept here; the detail of each calf and toe, of which there are thousands, is quite masterful.

In The Descent, as with much of her work, the inner chaos is such that it is difficult to see all the way to the bottom. The only way, of course, would be to tumble down yourself.

“Rachel Kneebone: Regarding Rodin” runs through August 12 at The Brooklyn Museum’s Elizabeth A. Sackler Center for Feminist Art.