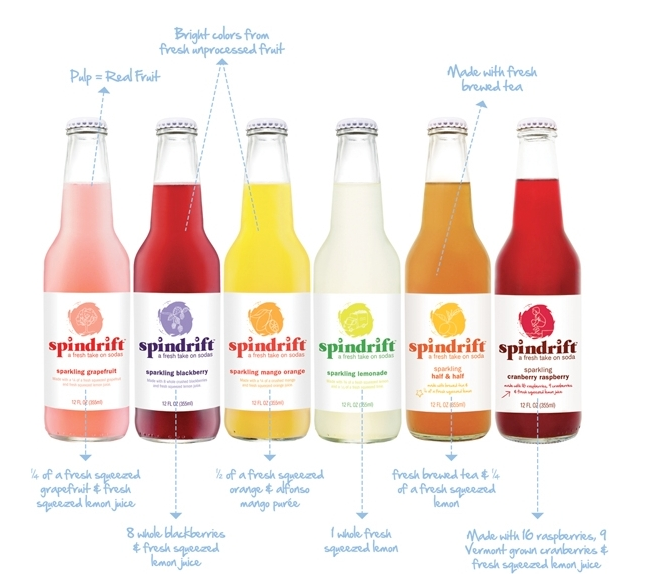 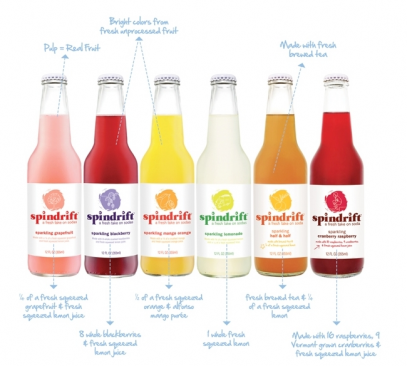 A friend of mine works in advertising, and one of her clients is a big soda maker who is flailing, because people just don’t drink soda like they used to. First we started to drift to iced tea, then water (remember Evian?), then “healthy” water (Vitamin, Smart, Coconut), and now some of us, the ones who don’t really like water no matter what you add to it, seem to be going full circle to soda. “Healthy” soda.

I personally have been hooked on San Pellegrino Arincatas since the fall, when my son was born. I still wasn’t drinking like I used to, but I needed something more special than water because raising kids can make you batty, and you need to indulge in something. So I turned to Italian orange soda. It was sweet, AND it had 16% juice! But it became too sweet. Like it was hard to finish a can. Around then, I got an email from a woman promoting a new soda, Spindrift, that purported to be an “all-natural fresh squeezed ‘soda.’ ” Free, healthy soda? Of course I wanted some.

A case of Spindrift is now in the prize pool of our subscriber drive (open to current subscribers too), where you can win one of 20+ awesome dinners, brunches, bar tabs, and cooking classes around Brooklyn. Sign up to win, and we’ll let you know if you were lucky at the Kitchen Swap on Thursday.

A tiny message on each bottle, which is made in Massachusetts, reads “Sodas: A Reintroduction — I’m sorry — we’ve gotten off track. Let’s start again. I’m a soda. I’m made of sparkling water and crushed fruit. Simple, light, refreshing. Give me a second chance…please.”

It’s cute, because it’s true. Every flavor is not cloyingly sweet, or crazy carbonated. Instead it was effervescent and light enough to be acceptable for breakfast. (This is the sign of a true soda-holic—if you crave it first thing, then you’re hooked.) I loved nearly every flavor in my assorted pack—blackberry, the Arnold Palmer (what they call half-and-half), grapefruit, cranberry-raspberry and mango-orange. (The lemonade was just a bit too puckery for me. I like to cut down on sugar, but not that much.)

The only thing that is keeping me from developing a daily Spindrift habit is the price (it’s $2.50 a bottle). A tiny artisanal food company that makes its drinks in small batches just can’t compete on price with mass-producing monoliths like Pepsi or even San Pellegrino. It’s also seriously hard to make a soda with fresh juice and not high-fructose junk.

For now, Spindrift is more for special occasions—like when I pick up fancy cheeses, marinated mushrooms and rabbit rillette from Bklyn Larder, where it’s stocked (along with Marlow & Sons, Foragers Market, and The Brooklyn Kitchen).

Of course, I would love to get another free case, but I can’t. So I asked the kind folks at Spindrift to offer me one to give to a BB subscriber. We’ve got three days left in our subscriber drive (open to current subscribers too), where you can win one of 20+ awesome dinners, brunches, bar tabs, and cooking classes around Brooklyn. And now, a case of Spindrift is in the prize pool. Sign up to win, and we’ll let you know if you were lucky at the Kitchen Swap on Thursday.