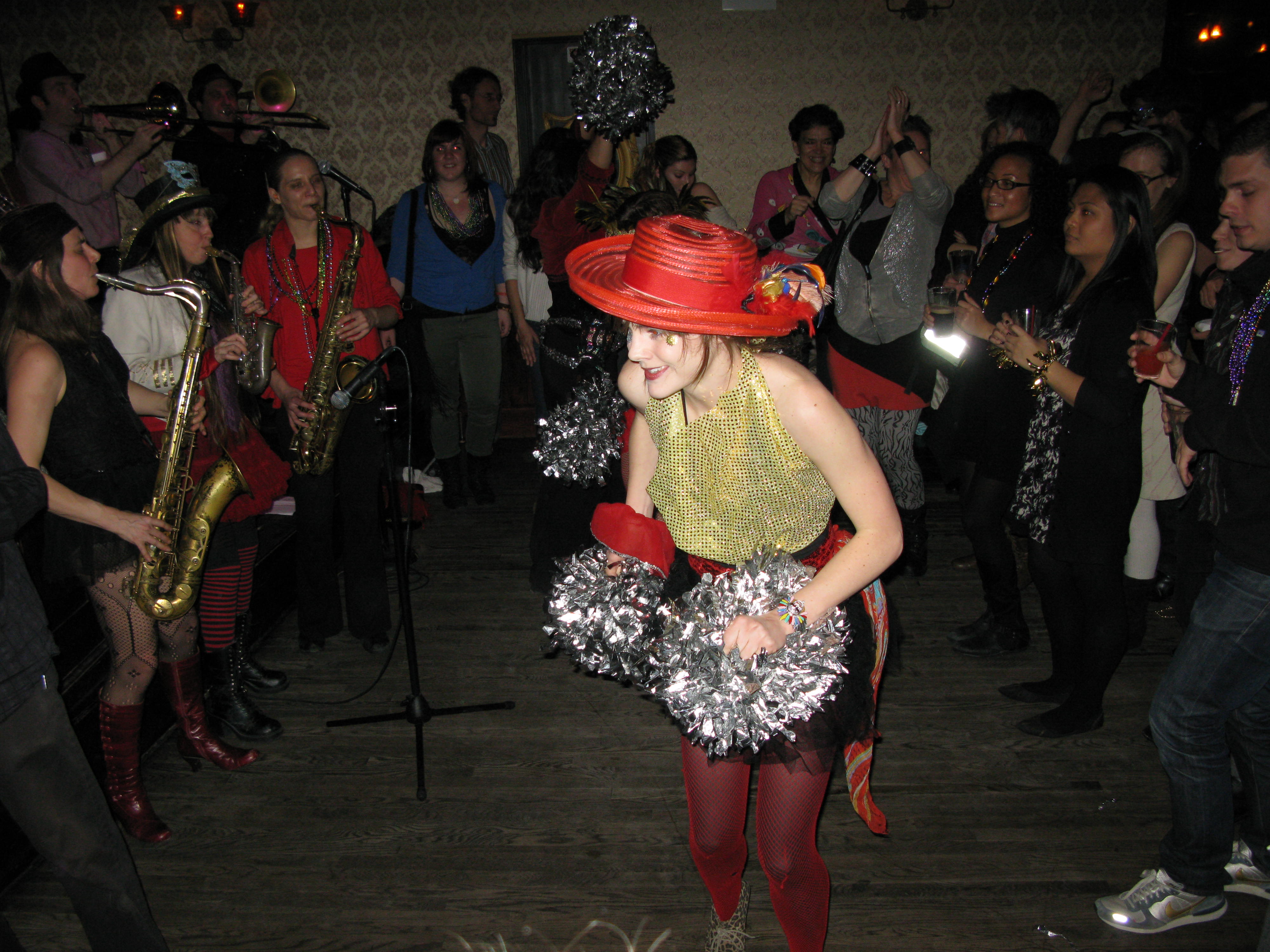 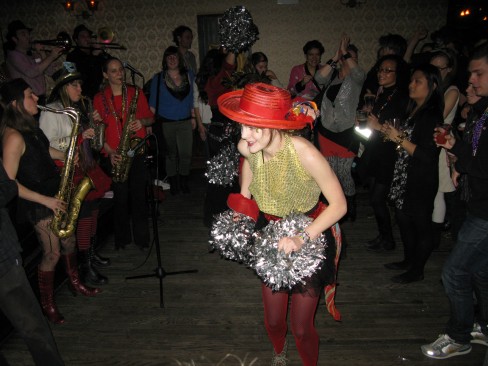 Fat Tuesday at The Bell House.

Like moths to a flame, we found ourselves following the amber glow of Edison lights down Seventh Street in Gowanus last Tuesday on our way to The Bell House for a night of inhibitions-be-damned intemperance with fellow revelers in arms, or rather masks. It might not have been New Orleans’ Bourbon Street, but it was Fat Tuesday all the same.

We were surprised to see so many faces when we entered the bar. To be fair, walking around Brooklyn as a masked marauder might attract the wrong kind of attention even on Mardi Gras, but still. Sebastian and Sabrina were one of the few couples we found wearing face masks early in the evening. They were equally surprised and a little bit embarrassed about being two of the few in costumes. This was their first Mardi Gras, as they’d recently relocated from Russia. “I thought we’d see more people dressed up,” Sebastian said.

In fact, we didn’t see our first feathered headdress until almost 10pm, but soon enough, it would look like a glitter bomb had gone off in the bar. While most attendees decided to stay incognito, the ones who went all out made up for it, forming pockets of multi-colored plumage and venetian-styled masks, tapping their feet and swaying to the beats of DJ Peter Gunn. 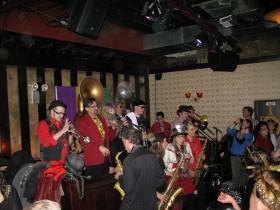 With the soft glow of a desk lamp illuminating the needles of his turntables, Gunn played a selection of New Orleans artists from an extensive record collection he housed in a canvas bag, fraying at the seems, set up on a small table beside him. Throughout his set, a steady trickle of people began slipping through the crowd and into the back, showing a hint of fishnets or a sliver of sparkle under their overcoats along the way. As Gunn’s set wound down and without warning, a 12-piece brass band burst forth out of The Bell House’s ballroom. It was like being in an episode of Treme.

Swaying to the beat and shuffling their feet, one by one, the members of the Hungry March Band took to the stage while a quartet of tutu, lace and sequin-clad dancers formed a semi-circle in front of them shaking pom poms, twirling batons and whipping the crowd into a frenzy with every swish of their hips. A trumpet player in a Kangol hat addressed the crowd. “We’re glad to be celebrating our favorite city in the world, next to Brooklyn of course, New Orleans.”

Dancing in the crowd took many shapes throughout the set, everything from foot stomping to full-body convulsions. By the time the band took its final bow, the crush of people at the bar ordering water was as big as the one for booze. Others spilled outside for cigarettes and fresh air before heading back inside to catch the second act–the Underground Horns–order another round and attempt to win one of the prizes the Hungry March Band’s dancers were passing out.

No one seemed the least concerned about what they might be giving up for Lent the next day, though, in the sober light of Ash Wednesday, it’s possible alcohol might have made their lists.