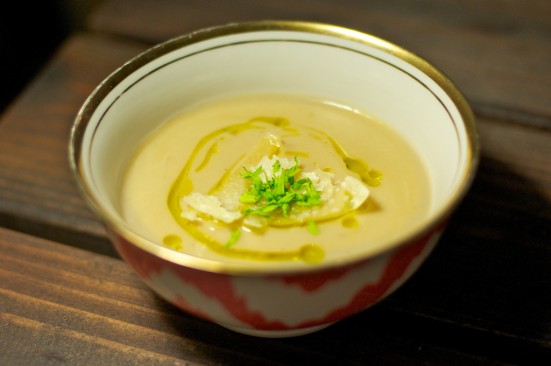 I haven’t been one to complain about New York’s unusually warm winter. Aside from the whole we’re-destroying-the-planet thing, it’s hard to not love winter weekends that are warm enough for picnics in Fort Greene Park and runs across the Brooklyn Bridge. However, there is one aspect of cold weather I have been missing: there hasn’t been a single day chilly enough that all I wanted to do was stay home and spend the day making soup–something that usually happens at least once or twice most winters.

Luckily, the folks at Sea Bean Goods have a better idea than staying home and cooking soup: they’re delivering it to my doorstep. Hey, you can get anything from raw milk to ham hocks delivered weekly to your door in Brooklyn, so why not soup?

Sea Bean, run by Brooklynites Nicole Centeno and Brian Chaszar, sold soups at Smorgasburg this summer, and their products are also on the menu at Paulie Gee’s in Greenpoint year-round. Every week their soups are made with fresh market finds, and they’ve consistently been among the best liquid meals I’ve had anywhere in NYC, from watermelon-cucumber coolers in summer to roasted mushroom and potato in winter.

Sea Bean’s new subscription service delivers one or two quarts to your doorstep once a week; what you get changes each time. Right now, they’re serving seasonal flavors like white bean and kale, curried carrot and apple, and Filipino arroz caldo (ginger chicken and rice). Most ingredients are sourced from New York farmers’ markets, and you can request to receive vegetarian-only soups. Soup subscriptions are $60 for four weeks, and can be delivered from anywhere in North Brooklyn to as far south as Ditmas Park and as far east as Kings Highway, or in Manhattan south of 90th Street. Sign up information is available here.