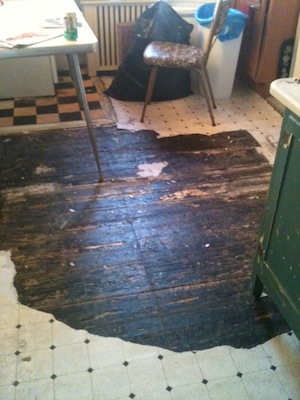 Look at this goddamn floor

Shame and disgust can be effective motivators. They’re the reason I spent the better part of two weekends laboring on all fours in the kitchen. Flash back to New Year’s Day, when my mother-in-law, visiting from Texas, came over to cook us a huge, hearty, and very Texan holiday meal–chicken and dumplings, corn pudding, cornbread, blackeyed peas, everything beige.

When she arrives I zero in on all the places I forgot to clean. I figure we get a pass on the continuing saga of dog hair since she has a pack of canines at home. But most egregious was the floor right in front of the oven. I should point out that the oven is a bottom-of-the-line miniature number, probably at least two decades old, whose door can’t open all the way because at about the 80-degree angle it hits the radiator. The flooring there barely qualified as floor anymore. There, the cheap gray sheet vinyl covering had bunched up because it was shoddily installed, so it had missed any moppings, and it was moldy and wet and puckered open to show the remainder of the stick-on checkered tile beneath it that I had installed a decade ago.

It was a moment of domestic awareness and shame akin to Adam and Eve realizing they were naked. Look at this goddamn floor. I was mortified. The slapdash placement looked like it had been thrown down in ten minutes. It had scars across the center of the room, the most visible area, where excess sheeting had been torn off, forming a jagged edge which was tacked down with large-headed nails. It had been installed while we lived in Louisiana between 2007 and 2010 and sublet the apartment. Who was responsible for this abomination?

Let’s see: The only qualification to be a handyman or worker in my building is that you have to be stoned. The new guy working in the stairwell in recent weeks is a particularly notable example. My husband named him Hallway Zombie. He is not a zombie of the Romero strain that is currently so fashionable, but one of the O.G. zombies of the voodoo style. This fellow is not interested in brains, he just stands in place with glassy eyes. Further confirming that he is a semi-revived ex-person, he was not in the least fazed by our sizable dogs the first time they came thundering down the steps and barked at the new intruder.

He occasionally does something to the stairwell’s pressed tin walls–one of the only nice semi-intact original features in the building–that involves covering them wiith spackle.

Somehow while he marks off the hours holding down his piece of a stair landing, a white powder has descended upon everything in the stairwell and foyer which is then tracked into the apartments. (Good thing this mysterious task takes priority while we have crumbling holes in our walls and ceiling from water damage!)

As for the guy who normally does our household repairs, his M.O., when he keeps an appointment, is to arrive, announce he has to go get a part, then disappear for a time ranging from hours to days.

For 18 months, I’d been trying to not see our scarred Frankenstein of floors, because our plan is to move as soon as we can. But now it tormented me with little bits curling up, begging to get pulled. So I pulled, though it meant embarking on a project I had not planned in an apartment I don’t own, an apartment we plan to move out of as soon as my husband finds a full-time job. Once I started, I couldn’t stop. It tore like wet cardboard, and I ripped the whole nasty business up in minutes.

I then pulled out over 125 nails that had held the flooring down, marveling that someone had taken this many steps to do such a shitty job.

There are hardwood floors hidden throughout the apartment, an orange wood that’s still in near-perfect condition in the apartment across the hall, but in the kitchen the boards were covered with decades of flooring adhesive and paints or stains. They’d taken a licking over 90-plus years, but I’d see if I couldn’t revive them. Section by section, I treated the floor with Citrustrip gel and Goo Gone, softening the layers into a black gunk that I spent weekend and evening hours stripping off, with help from my husband.

Once fully revealed, the wood in the heavy-trafficked areas was too far gone to restore, so I painted the floors a battleship gray. I also painted the kitchen’s bottom-of-the-line cabinets (the lower ones less than five years old with doors irreparably askew), a flat white. 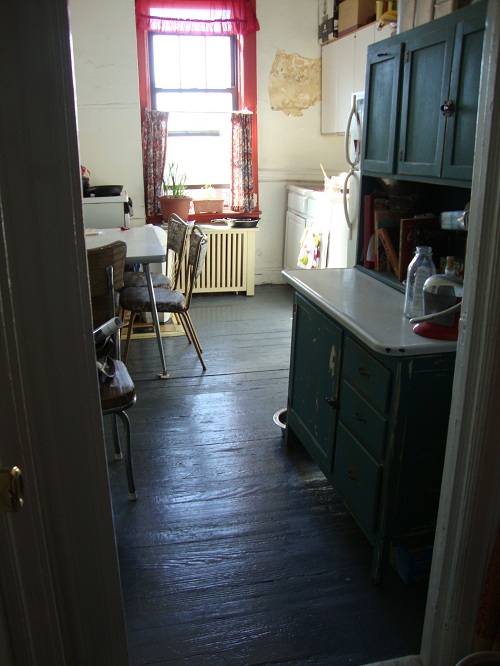 The space is transformed, a rustic vintage country kitchen in the city. You can see in the authentic wood-grain texture that these are well-used wood boards (with the odd embedded dog hair ensuring our dogs’ legacy in the apartment). It’s not the out-sized chef’s kitchen with stainless appliances and an enormous granite-topped island that is a mandatory feature in the luxury houses I write about for my job, the mega-kitchens I suspect are rarely used for cooking. My new room is a place to make chicken and dumplings as my mother-in-law showed me and then use the bird carcass to make chicken stock. She and I agree in old-timey values, talking about our favorite brands of well-made shoes and getting them on sale, and making things from scratch. Use everything. Don’t waste.

I am proud of the results of my work. But those hours of toil included some of the frequent moments when I think I should be farther along by this age. This is the sort of home improvement project that maybe you do in college, or when you are in your 20s working low-paying publishing jobs. Not when you’re 38 and you work at an international financial news entity. We shouldn’t even be living in such a beat-up apartment. We were supposed to upgrade almost two years ago.

In case you haven’t noticed, though, the country is still reeling from the Great Recession. While I am fortunate to have a job, my husband has been looking for a full-time job for over a year and a half. Everyone knows a long-term unemployed person now, if not multiple such persons. Being married, having reached a certain age, even working full time doesn’t entitle you to a house with a gourmet kitchen right now. Just because I’ve never owned a car less than ten years old doesn’t mean it makes sense to buy a new one at this uncertain moment in the timeline. We can’t continue acting like things are different, because that’s partly what got the nation into deep economic trouble.

In all ways, it seems, we need to peel up that cruddy cheap layers that won’t last–the quick fixes–and return to more sustainable ways that are proven to endure.

Colleen Kane is a writer and sometimes tweets helpful and/or disturbing messages into the ether. Check out her previous Brooklyn 2.0 columns here.