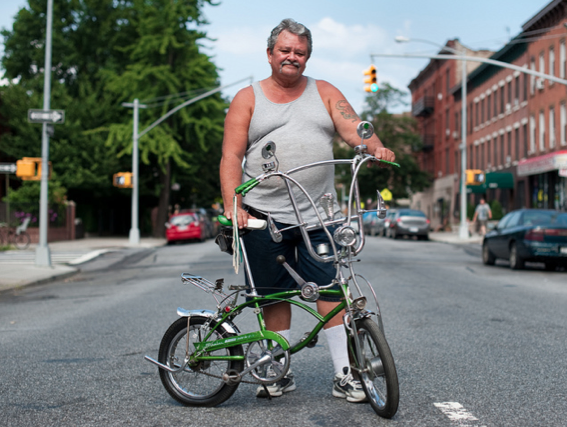 El Gallo, a member of the Puerto Rico Schwinn Club, with his elaborate bike.

Roberto and William, twin brothers, are the founders of the Puerto Rico Bike Club in Bushwick.

Roberto, president of the Puerto Rico Schwinn Club, inside their clubhouse and headquarters.

Miguel and Jose show off their club’s vests.

A member of the Classic Riders club in Bushwick with his bike.

T, Terri and BFresh, three of the members of the Big Ballers Bike Club in East New York.

Terri models a bike that her brother, BFresh, built.

There are also lone bike fanatics, like Angel, a Bay Ridge resident who built this bike.

Robin, from Park Slope, has been collecting and rebuilding Schwinns for 50 years. He was once a pigeon keeper.

If you look closely you can see the cobra head mounted on the handlebars.

In the Bronx, James has turned his bike into a fuzzy, flashy work of art.

Raoul, Edgar and Pablo three members of a Schwinn club in the Tremont section of the Bronx.

Classic RIders, in Bushwick, sporting a wide variety of Schwinns.

More Classic Riders on their tricked out Schwinn Stingrays.

Kids in Bushwick, hanging with their bikes, the next generation of bike clubs, perhaps.

While photographer Chris Arnade was walking around the city, eyes trained to the sky in search of rooftop pigeon keepers for a photo series about their hobby, he realized that there was a street-level corollary: bicycle clubs. “They really do go together,” Arnade explained in a phone call with Brooklyn Based. “Down low you have the guys with bikes, up high you have the pigeons, and it’s the same men.”

Throughout the city, from East New York to Bushwick and up to the Bronx, wherever Arnade went looking for pigeon keepers, he found bike clubs, the majority of them focused on fixing up and tricking out classic Schwinn cruisers.

To see a gallery of Arnade’s bike club photos, and continue reading, click through to our site.

Since January, when we brought you a slideshow of Arnade’s pigeon photos called Pigeon Keepers of Bushwick, his work has been noticed by many a media outlet. The Brooklyn Heights-based banker has been written up on Brownstoner, Gothamist, The Huffington Post and profiled by The New York Times. His show Pigeons and Portraits opens this Friday at Urban Folk Art Studios on Smith Street; all of his proceeds will go to the Hunt’s Point Alliance for Children.

While Arnade’s images from Hunt’s Point have made waves, we were intrigued by the set of bike club photos on his Flickr page, so we called him up to ask about bike club culture in Brooklyn and beyond. “It’s not dissimilar to motorcycle clubs,” he said. “These guys love their bikes. They’re almost all Latino men, and they’re really into fixing up old Schwinn bikes. They find pieces all over the place, sometimes on the Internet, and they refurbish, and then add on to them.” Arnade explained that Schwinn produced a huge variety of bikes throughout the 20th century, many of which were widely available at stores and through the Sears catalog. They were the standard bike of choice for the middle class, and they’re still stashed away in junk shops and bike stores, making them a collector’s dream. These clubs are like the urban, garage-free version of classic car enthusiasts.

In East New York, he found a different sort of bike club–younger groups of mostly African-American men, who build elaborate bikes of their own designs. They also form clubs, with members taking roles like president and secretary, but it’s a different aesthetic than the Schwinn clubs in Bushwick and The Bronx.

Arnade has photographed and chatted with four Schwinn clubs in Bushwick, and is just beginning to scratch the surface of the clubs in the Bronx. “Some guys are real purists and will only add on real pieces from same period of time,” he explained. “Some know absolutely everything about which Scwhinn was issued when.” Others create elaborate hybrid bikes, heaping on decorations and features like a radio and speakers. Club members wear vests, and many in Bushwick have a clubhouse where they congregate to work on their bikes and hang out. “There’s a lot of beer drinking and a lot of salsa music,” Arnade said.

The clubs also ride around their neighborhoods, and the bikes are both for show, and for transportation. While Arnade described much of Brooklyn’s bike culture as, “almost an affectation of the wealthy,” he said that the bike clubs in Bushwick are, in his experience, friendly and welcoming. “I’ve had nothing but good experiences,” he said. “I’d much much rather hang with the Classic Riders (a Bushwick Schwinn club) than with the Park Slope guys with their $5,000 bikes.”