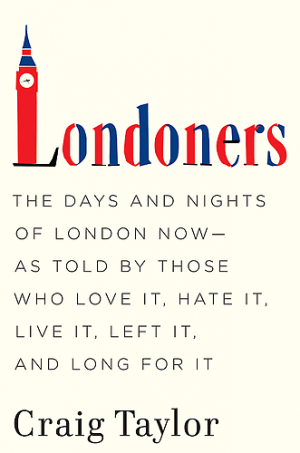 The weather cooperated perfectly with the atmosphere of last Tuesday evening’s event, the launch party at Greenlight Bookstore for Craig Taylor’s new book Londoners: The Days and Nights of London Now–As Told by Those Who Love It, Hate It, Live It, Left it, And Long for It. Rain-soaked punters trudged in from the gloomy, overcast, typically English day. But we were not in London, we were in Brooklyn, and unlike Craig’s East London event the previous day (attendance: 1) Greenlight was packed.

Emily Russo Murtaugh, a bookseller at Greenlight, introduced the speakers and summed up the wistful atmosphere in the room, noting that if she didn’t arrive at work in the morning she could be found at JFK with her bags packed.

As a Brit in Brooklyn I shared her pain, but my American better half reminded me that perhaps jumping on the next flight out wouldn’t be well-received by our colleagues. That said, the ensuing stories had us both checking flights out, weather be damned, the very next day.

Craig Taylor is a Guardian journalist and author, and luckily for someone hosting a book reading, “talking is deep in his bones and blood,” according to his editor Matt Weiland, who introduced him. His book, five years in the making, features nearly 100 essays from Londoners of all walks of life. Taylor interviewed over 200 people, used over 300 tape-recorded batteries, and ended up with 950,000 words of transcript. Luckily for us, these have been edited down to a collection of perfect bite-sized chunks of what it is like to live in London. 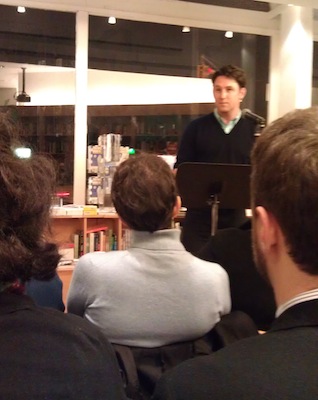 During the reading, someone from the audience asked how he found all these people featured in the book. Like Brooklyn, London is a place of action, of verbs. Embarking on his book, Taylor noted all the various verbs he could attribute to London. He then built his book from people associated with different actions. The evening’s readings enacted those verbs, “Arriving,” “Seeing,” “Earning” and more. A stellar lineup of Brooklyn-based writers, “some with wonderful English accents, some without,” had been assembled to embody a selection of Craig Taylor’s Londoners for a few minutes.

It’s hard to pick out highlights from the consistently solid collection of readers. Reuters blogger, and owner of a fine tweed jacket and English accent, Felix Salmon, hilariously recounted our favorite of the evening, a London financer’s tale of misery living in “Londin,” a parallel world to London that consisted of his daily, monotonous trips to and from work, as opposed to the tourist’s “London” filled with sights and history. In a moment that could have been taken out of life in New York, he noted that “it’s a bit shit in Londin, but there are little pleasures, like walking very quickly and listening to my headphones.”

The alternately odd, funny, and riveting tales, delivered by a variety of voices, were reminiscent of This American Life. Although there had been a few groans at the length of the program when it was distributed at the start of the evening, by the end it felt like we would have all happily stayed for another hour to peek into lives that we’d otherwise not get to explore.