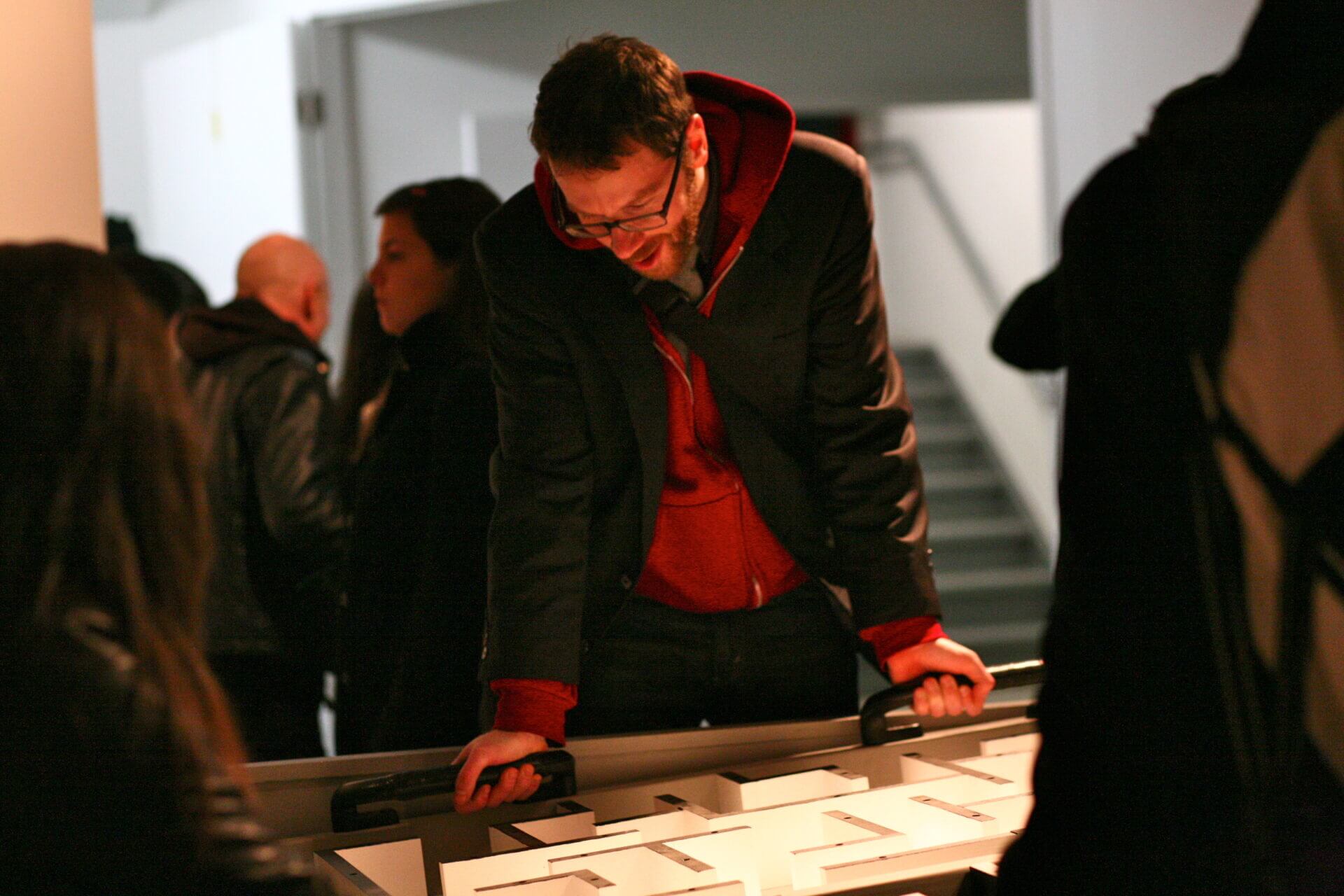 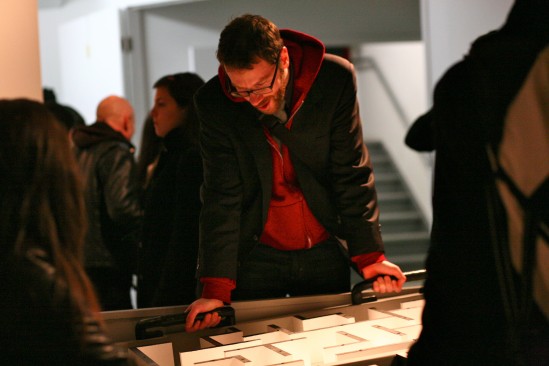 An attendee at Nuture Art attempts to out manuever artist Risa Puno's labyrith.

The who’s who of the Art World descended on Chelsea last Saturday to rub elbows and discuss art at the annual Armory Show in ways I was sure would go over my head, which is why, when I heard that some of Williamsburg’s, Greenpoint’s and Bushwick’s best galleries–Like The Spice, Pierogi, Parker’s Box—were banding together to offer a dose of culture that didn’t require a weekend subway commute, I decided to cull some culture from Brooklyn Art Night instead.

With all the hullabaloo about Bushwick last week–some of which I contributed to—I decided to take the Tip Sheet testing back to my old neighborhood by attending the fourth-annual installment of Bushwick Beat Nite, a gallery hop-cum-bar crawl that brought me to some of the gallery spaces at 56 Bogart Street there’s been so much chatter about lately. The building, catty corner from the Morgan L stop, is a catacomb of concrete floors, white-washed walls and red support beams with a collective of art galleries tucked into its nooks and crannies.

I descended the stairs and headed straight into Nurture Art. Its current exhibition, Systemic Risk, opened on February 17 and includes works by Daniel Bejar, Sujin Lee, Laura Napier and Risa Puno. The show’s description is a bit depressing (“Systemic Risk reveals how our familiar and trusted systems are in a process of breaking down and being discredited.”); however, the exhibition itself proved highly entertaining. For starters, Daniel Bejar (the artist) not Dan Bejar (the musician) found inspiration in a misguided email intended for the latter, which led to the former creating an entire exhibition built around impersonating the Destroyer front man. I’ll admit, it got a little confusing, especially after a couple beers.

An installation that required fewer synapses to fire (or so I thought) was Risa Puno’s Good Faith & Fair Dealing. It has the feel of a giant Foosball table but with a mirrored pair of mazes present where the tiny men in short shorts should have been. The goal is to successfully maneuver a red ball, slightly smaller than a billiard ball, through the maze without it falling through the holes drilled into its base while the player opposite you is doing the same. It was either a competition or a team sport depending on how people felt about the person across the way. More often than not, it ended in a lot of yelling and dropped balls, but two couples, on a double date, managed to make it to the finish just as the gallery was turning off its lights for the night. “Much better than beer pong,” were the wise words of the gallery’s assistant director Rachel Steinberg. I tended to agree. 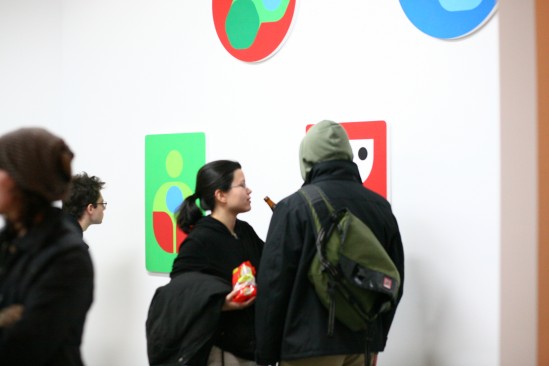 Before leaving, I ducked downstairs to see what the subterranean galleries had going on. At Theodore Gallery, the artist Alasdair Duncan was wearing a pair of bright blue jeans that coordinated with his over-saturated graphic designs hanging on the walls. His solo show, Signs for the Future: essen vil, essen der, elet insiir, is on view until April 21.

Coincidentally the electric blue of Duncan’s denim would turn up again at Indie Screen where I ended the night at its after party grabbing a Guinness from a bartender at its neon-blue bar before slipping into its screening room to check out one of several videos that had been screened at various locations across North Brooklyn that night. Note: Watching Lee Wells’ Riot Kids, 2012 before bedtime is the stuff nightmares are made of.

Leave a Reply to marysls