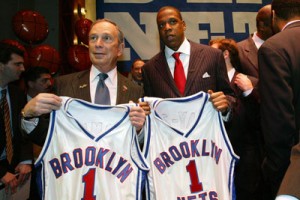 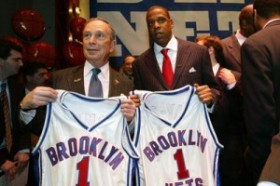 Mayor Bloomberg and Jay-Z, two of the Brooklyn Nets' biggest fans to date.

And All-Star point guard Deron Williams may not be moving east with the rest of his team when they leapfrog over Manhattan from New Jersey to Brooklyn.

In other words, our soon-to-be Brooklyn Nets don’t seem likely to give us the opportunity to root for the winning team all that often. Barring some miracle finish to the shortened season, right now the Nets are on the verge of missing the playoffs for the fifth year in a row. The franchise is only two years removed from the worst NBA record of all time. Next year has the potential to be a long season, which could add to the frustration Brooklynites are already likely to feel amid all the talk of eminent domain, traffic jams and affordable housing bait-and-switch that already surrounds the Barclays Center, the Nets’ arena.

So what does it mean to Brooklyn basketball fans if, in fact, our new home team sucks?

While the Nets’ dismal stats paint a clear picture of where they stand in the NBA, I wanted to find out whether Brooklyn basketball fans would be willing to root for an underdog in exchange for a team that calls our borough home. “Yes, being in Brooklyn may give [the Nets] a little bit of an edge and a cool factor, but nothing can ever compete with the New York Knicks,” said Derreck Johnson, 33, a graphic designer who lives in East Flatbush and says that the NBA is the only professional sport he follows with a passion. “There’s too much history there and they play in the most famous stadium in the world. I’m not going to start automatically reppin’ for the Nets because they are in my borough now.”

Johnson also noted that although the Knicks haven’t had the greatest record in recent years (Linsanity aside), the Nets have fared far, far worse. “The Nets haven’t been a marquee team in many years,” he said. “Most people think it’s painful being a Knicks fan–imagine how they feel across the [Hudson] river right now.”

The team that plays at The Garden will always be top dog in the city, Johnson said, but he did express admiration for fans ready to root for Brooklyn ballplayers.  “I give props to the people who will jump on the ‘wagon from day one and hold on tight.” 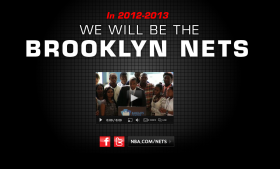 One of those wagon jumpers, Anthony Davenport, 35, of Clinton Hill and owner of Regal Financial in Manhattan, is ready for anything and everything Nets. “I moved to Brooklyn 13 years ago, and fell in love with the place. So now, I love everything Brooklyn,” he said. “They’re actually talking about the New York Islanders playing there, and if that happens I will become a hockey fan. Having anything associated with Brooklyn, I’m down with it.”

That includes horror-show seasons and all.

“They’ve sucked, honestly,” Davenport said of the Nets. “They’ve been trying to free up so much cap room, like when they tried to go after LeBron James. Since they didn’t get him, it’s been a waiting period.” There could be hope for the team though, according to Davenport, who thinks that the Nets could be a winning ball club in a short while–perhaps even among the NBA elite within the next few years.

“They have a ton of money that they’re going to be able to throw out there,” he explained. “The owner (Mikhail Prokhorov) is a complete egomaniac—he’s been described as the Russian Mark Cuban, so he’s going to want to win at all costs.”

And Davenport says don’t count the Nets out of the running for the city’s attention, either—partially due to the role one of Brooklyn’s most famous native sons will play.

“You’re going to have Jay-Z affiliated with it. He’s going to have his fingerprints all over the team,” he said. “I can see it very quickly going from ‘Oh my god, the New Jersey Nets are so uncompetitive, so lame, so uninteresting,’ to literally an overnight sensation where they can get players that are very, very good.”

Whether terrible or title winners, there’s no getting around the fact that the Nets are part of a huge shift in Brooklyn life and culture, brought on by the ever-growing Barclays Center. “There will be some trial and error before things run smooth over there,” Johnson said. “There is going to need to be some legendary patience shown from the team, the management, the owners, the arena and the residents of downtown Brooklyn.”

As a big NBA fan who pulls for the Knicks I’m definitely going to have to weigh in and agree with the need patience that Johnson described: No Howard and maybe no Williams might be a little too much to overcome in terms of pulling in new fans. It could be tough for Brooklyn to get behind a team that’s rolling into town surrounded by all the contention of the arena, and then on top of that, to continue their losing ways here.