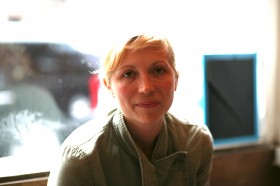 Jessie Zapotechne is a familiar face for me in Fort Greene. It feels like I always see her doing one of two things–riding her bike or doing her laundry. When I found out she’d be one of a handful of women participating in the Red Hook Criteria for the first time last Saturday–the renegade bicycle road race and 5k run that’s started drawing some of the best professional cyclists from around the world–I decided to keep an eye out for her over the weekend. Sure enough, I saw her carrying a bag of clothes to the laundromat Sunday afternoon and had to ask her: What’d you do this weekend?

Friday: I was in the office late. I know I worked until 7:45 p.m., which is late for me. I’m going to Berlin Wednesday, so I was wrapping up some things at work. I’m really excited. I’m going for the Berlin half-marathon. I left work and went straight to Red Hook because they were doing a Red Hook Crit dinner beforehand. There was a running race and a cycling race, and a lot of the people who were racing were invited to that plus sponsors and people related to the race. That was at Dustin Yellin’s studio. He’s an artist with a huge warehouse space totally redone on the inside. It’s all brick with exposed wood rafters, totally kind of raw space. They had roasted two lambs for this event. They had been roasting the lambs out in a sculpture garden to the side, so that was outside with bar–wine and beer and Red Hook cocktails. Everything was sort of sponsored by Brooklyn-based people. Baked in Red Hook supplied some stuff. Sixpoint supplied some beer. I had dinner there and met some of other people racing. Then I road over to my boyfriend’s place in Bed-Stuy.

Saturday: I got up early and rode into the city and met my friend who’s visiting from Chicago. We ate at Barmarche, which is a restaurant in Nolita. We had brunch there then she got on the train to go back to Chicago and I went over to Nike Stadium. That’s where my running group meets out of, and they had a run at 1 p.m. Typically I lead the run with another coach, but I was not running because I was racing that day. The guys that work at Stadium customized a jersey for me, so I was there for a little bit while they did that. Then, I went to Bicycle Habitat and got a couple last minute things. Two of the guys that were working there were also racing, so I was talking to them about it. I left there, rode home, ate dinner with my roommate and her boyfriend, got all of the race gear together, rode over to Red Hook and registered for the race.

I hung out in the staging area until the race started. A lot of people from my running group, the Bridge Runners, were running in the race, and my roommate runs with North Brooklyn Runners, so a lot of her friends were also racing. That was cool to see everyone. All the cyclists started showing up, and it was kind of scary because there are a large number of professional cyclists from all over the country and Europe. There were teams from Italy and Spain. Before the running race started, we had an opportunity to ride the course. It’s L-shaped, so there were two parts on the course that were really tricky. One was a switch back where you literally have to do a 180 [degree] turn, so you either have to be able to slow down really fast or take it wide. I was nervous about that going into in, and then there was another area of the course that was a zigzag. That was where people had crashed last year. A number of people crashed there this year too. It was nice to be able to get out and ride the course. Then, we watched the running race. When it was over, we got to ride the course one more time. It’s kind of funny. I actually crashed not even moving. I’d stopped to see my roommate on the side and didn’t get my foot out of the clip in time, so zero miles an hour, I crashed. I felt like I got the crash out of the way. Then we did the race.

As soon as you’re about to get lapped by the lead of the pack, you’re out. From what I understand, a lot of the amateur cyclists just want to see how many laps they can do. I didn’t make it too far, but it was exciting to be out there, especially because I only saw two other girls. The one girl who is super amazing, her name is Kacey [Manderfield], she actually won the race the first year. It was really exciting to see her racing.

After the race finished, we had some drinks at the [Brooklyn] Icehouse and then headed to the after party at The Bell House in Gowanus. Fortunately, the Red Hook Lobster Pound was there with a truck outside because we were starving at this point. I had a lobster roll, hung out for a while and ended up crashing at a friend’s place in Red Hook.

Sunday: I rode back and met my boyfriend for breakfast at Walter’s. Then, I went home and took a nap. Now, I’m doing my laundry.

Rating: This is a 5 weekend for me. The funny thing about it is that, when I initially said I would do this race, I didn’t know what it entailed totally. From the point I said I’d do it, I had six weeks to train for it, and in those six weeks, I really did a lot of work on myself, on my bike, on my style of riding. Everything was focused on yesterday, so for it to come and for me to do it and not chicken out, I feel super accomplished to have got out there and tried it.