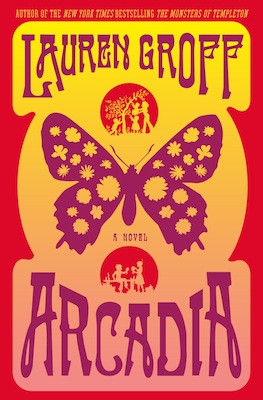 I feel I should say at the outset that, before reading Lauren Groff’s gorgeously written new novel Arcadia, about a child of the 1970s who was born and raised on a post-Age of Aquarius, back-to-the land, counter-culture commune–and how that left him feeling both blessed and cursed–I had never given much careful thought to whether I could picture myself living (and sharing, like, everything!) with so many other people. Ten pages into this book, I knew exactly what I thought of the idea: No freaking way! I mean, say what you will about the karmic upside of shared visions, shared labor, shared spoils, organic everything, bathing not all that often and loving the one you’re with. For me, it boils down to this: Communes = Too many people, way too close together. It’s a privacy thing.

And yet, within the next ten or so pages, I was utterly engrossed in Groff’s richly imagined commune called Arcadia, home and whole world of Ridley “Bit” Stone, son of Abe and Hannah. Or maybe it would be more accurate to say that I was utterly enthralled by the Stones. Abe and Hannah are among the founding members of this enclave of hippies-with-work-ethics, who’ve settled in and around an abandoned mansion in the remote woods of western New York State, where they grow their own fruit and vegetables, tend to a little livestock (which they don’t eat), farm themselves out as midwives and day laborers, and oh yeah, cultivate lush crops of marijuana, with the intention of selling much of it to finance their idealized life. Adjusting themselves to the guiding principles of capitalism is just one of the little compromises that these utopian dreamers make in an effort to keep Arcadia going. Ironically, it will be these compromises that will eventually lead to its downfall.

But that is a long way off. In the early years of this story, the dream is still young and strong, and Groff catches us up in it, colorfully keeping us invested, even while she dallies in the relatively mundane logistics of commune life: of finding and/or making enough space, lodging, food and clean water for Arcadia’s growing population– which increasingly includes the various slackers, stoners, fugitives, underage runaways and just plain crazies who are taking advantage of the commune’s second-chance-for everyone policy. Before they’re done these less-than-desirables will come close to outnumbering Arcadia’s core of true believers. And that won’t be a good thing, for anyone.

But as clamorously teeming and increasingly unstable as this milieu is, the real story here is Bit, through whose eyes we see everything. It is also the story of his most-loved ones: mother Hannah, the quintessential earth mother, except when she’s lost in the depths of a bottomless depression; father Abe who, early on, becomes paralyzed from the waist down after a fall from the Arcadia mansion roof; and Bit’s future wife Helle, the oddly beautiful daughter of the commune’s charismatic, autocratic, full-of-crap leader, who sent his little girl off on her first acid trip at the age of five–the first in an assortment of warping childhood experiences that will leave Helle a forever-broken adult.

Although Bit is destined to fare a little better, he too is permanently knocked off-kilter by the doomed dream of Arcadia. We first encounter him at age five, already an old soul, but also a very fragile, unsettled, impressionable one. Born on the road, en route to what will become Arcadia, never touched by a TV, PC or telephone, he has no real concept of the outside world. The only world he knows other than that of Arcadia exists in a book of dark myths and folk tales, which inspire his own visions of witches and trolls and monsters in the woods–which seem to be as real to him as Arcadia’s actual inhabitants (some of whom, we suspect may be imaginary as well). For a kid like Bit, life in a place like Arcadia is a strange and wonderful and often perplexing thing.

It doesn’t get any less confounding for Bit in the second part of this book, which finds him a teenager whose pre-pubescent fascination with “froggy” Helle has bloomed into something like love. How she feels about him is never quite clear, and the ups and downs of this not-quite-relationship are no small part of Bit’s growing pains–and enduring ache. And Groff artfully puts us in his place: As this non-romance unfolds before our eyes, we’re not always sure what we’re witnessing. Helle’s signals are so mixed, and Bit is so typically confused, and their moments together are so fleeting, that we’re usually as much in the dark as Bit is. This is not the last time Groff will put us in that position. But she knows exactly what she’s doing. Her narrative ellipses only amp up our interest. We share Bit’s need to figure Helle out, to get hold of her and pin her down. But mercurial Helle stays elusive, and Bit remains off balance. Groff’s evocation of youthful romantic uncertainty is really pretty brilliant.

But if Bit’s feelings are muddled, there is no doubt about their intensity. All hormones and heartbreak-waiting-to-happen, his raw, pure teenage longing has a potency you can feel in your bones. And while he’s preoccupied with all that universal young-people angst, the only home he has ever known is starting to crumble, as Arcadia’s leaders’ lofty ideals become increasingly challenged by the years of hunger, poverty, hard north winters– and of course, so many people, so close together.

Thus, the end of the dream grows much closer. By the time Bit is having his teen coming of age, it is the Reagan-era “Morning in America” and all those 1960s and ‘70s notions about really changing the culture have already been abandoned by most of the outside world, whose outcasts and misfits have, over the years, continued to migrate to Arcadia, ultimately doubling its population, taxing the founders’ resources as well as their resolve, and causing rifts among leadership that slowly reach critical mass, until the inevitable meltdown.

Cut to downtown Manhattan, some twenty years later, where a 35-year-old Bit is a college professor half-heartedly teaching photography, and the single parent of pre-school daughter Grete, and an abandoned (or is it widowed?) husband, stricken by the absence of Helle, the love of his life, who went out one day and never came back. Once again in the dark right alongside Bit, we wait for an explanation. But Groff doesn’t have all the answers. Or at least she doesn’t give them to us. What she does is instead is draw us into the emotional funk at this point in Bit’s post-Helle life, while flashing back to key moments from the previous two decades, filling in just enough of the blanks, in suspensefully jumbled order, keeping us exquisitely hanging as we wait for her to hit us with another blast from the past. And yet as Bit dredges up his haunted memories, trying to make sense of his life–trying to understand how he and all his loved ones ended up as they did–we don’t have to wait for the last of Groff’s reveals to know what happened to them. Arcadia is what happened to them.

In the novel’s final movement, time spurts ahead another dozen or so years to find a middle-aged Bit in a precarious near-future, in which he is dealing with his vibrantly complicated, typically confused, now-teenage daughter Grete, with his aging mother Hannah, who is suffering the ravages of ALS, and with a whole world that is on the feverish wane, beset by rising temperatures, rampant species extinction and a virulently deadly new virus with no cure, which is spreading across the globe. All of it sends Brit full circle, back to Arcadia, now deserted except for a few homesteads harboring ‘70s survivors–including the widowed Hannah, slowly wasting away. In all this despair, Bit somehow has a breakthrough, finds a ray of light, sees the possibility of a fulfilled life, has a shot at happiness–or at least acceptance, of what has been and what still is. The question that remains right up to the last page of this book is whether or not he can let go of a lifetime of sadness, and make the possible a reality.

Even at her most non-linear (all those randomly sequenced flashbacks), Groff is a compelling storyteller, and I’d recommend this book strictly for the emotionally resonant journey on which it takes you. But what I really love about her writing is the sheer beauty of her prose, which is more like poetry in so many phrases and passages. Whether she is describing the grip of a mourner’s grief, the roaring power of a forest waterfall, the messy miracle of a baby’s birth, or the planes of Helle’s face, Groff writes sentences that sing. Many of them made me stop and go back and reread them. And then reread them again. Like this passage, as Bit is packing Grete’s bags, for the trip back to Arcadia, for Hannah’s dying days:

“In Grete’s room he gathers everything he thinks she’ll need: the clothes he remembers her wearing recently, the shoes, the photograph he’d taken of her and her mother when Grete was a toddler, forehead to forehead like conspirators. How alike they’d been, two sections of one soul. He takes the stuffed frog from when she was little, knowing she’ll need it. She looks like an adult now, but there is still a sliver of girl in her that Bit would fight to protect: the uncertainty that steals over her when she’s talking about boys, the delight on her face when he buys her anything pink. The moments when the e-reader has fallen from her hands and she gazes out the window, biting the corners of her long pale mouth, dreamy as her mother.”

As one of Brooklyn’s best writers Jhumpa Lahiri recently put it in the Opinionator column of The New York Times Sunday Review: “For surely it is a magical thing for a handful of words, artfully arranged, to stop time. To conjure a place, a person, a situation, in all its specificity and dimensions. To affect us and alter us, as profoundly as real people and things do.”

Lauren Groff accomplishes just that, on page after page of Arcadia, and she makes it seem as effortless as breathing.

Michael Sauter is a Brooklyn-based arts and entertainment journalist who has written about books for such publications as Entertainment Weekly and Publisher’s Weekly. He still hasn’t ruled out writing the Great American Novel, but isn’t holding his breath. You can read his past Booklyn columns here.