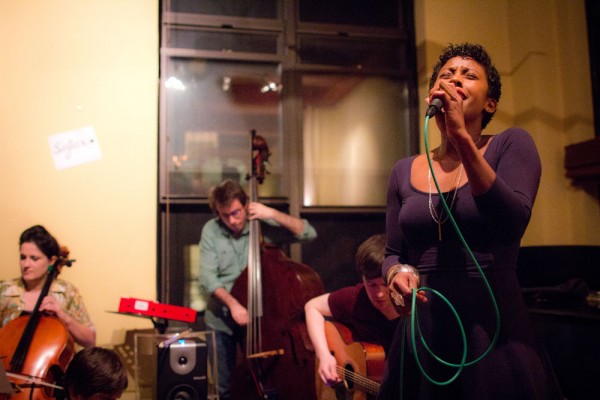 “OK. Listen up! There are three rules! And you all must abide by them.” Jodie Belman’s rich British accent boomed through the room, effectively cutting off the excited chatter that had filled the space moments before. “Number one! No talking, no texting, no chatting to the person next to you. Rule two. Please, please, please stay the length of the evening. And rule three. If you like what you hear, go and hear it again.”

There I was standing in a stranger’s living room in Chelsea with a lively group of about a hundred others for my first Sofar Sounds show. I’ve been to a fair amount of DIY spaces for shows–Shea Stadium, The Silent Barn, Market Hotel, and the occasional Bushwick loft, but nothing quite like this. For starters, the place was actually nice. Hardwood floors, tasteful color scheme, high ceilings, baby grand piano. Not only could I clearly hear the music. The acoustics were excellent (with little-to-no external amplification).

After all, it was the desire for a quiet, cozy, intimate space that had inspired the first Sofar (named after the Leonard Cohen album Songs from a Room and a play on the word “sofa”) Sounds show. But what began in a London living room with six friends back in 2009 has since morphed into an international series, currently spanning 17 cities on 5 continents. Jodie and Damon’s branch in New York (the second largest branch) has recently become so popular that they now have to maintain a waiting list for shows–not bad for a series whose success is largely based on word of mouth. Finding the right space for the shows has proved to be a bit trickier though. A number of people who come to shows offer up their apartments, but they’re too small, and often people who have nice places are afraid of having the place get wrecked. So most of the shows are held in large warehouses in Brooklyn. (Jodie found Friday night’s anonymous host while volunteering at a local charity.)

From my perch overlooking the makeshift stage, I watched people trickle into the apartment and join the convivial crowd. Instead of keeping to themselves, strangers quickly reached out to introduce themselves over a shared bottle of wine or a six-pack. So that by the time Jodie and Damon introduced the first band of the night, there was a thick sense of camaraderie in the air.

Joined by the lovely ladies of the Osso Quartet (who have also collaborated with Sufjan Stevens and many others), Brooklyn’s Wishes and Thieves were a delight. With a gold-tipped mic in hand, Jolanda Porter had the cool confidence of a modern-day lounge singer, and the additional strings arrangements (the band usually has more of an electronic component) fit the room nicely.

Next up was Freddie Stevenson (of The Dirty Urchins), who graciously stepped in at the last minute to replace Dry the River (who unfortunately had to cancel due to a timing conflict). For Stevenson, a troubadour of sorts, each song unfolded like a journal entry. His candid lyrics quickly endeared him to the crowd, so that when he casually asked the audience if they’d like to sing along, everyone immediately jumped in, as if they had been waiting for the cue all along.

Then following a short intermission for mingling, Lady Lamb the Beekeeper  [Ed. Note: Aly Spaltro, who contributed to our BB Songs series here] was up. Anyone who might have been tempted to break the first rule, remained completely silent in awe of Spaltro’s raw and desperate opening song, which she bravely sang a cappella, allowing every one of her evocative lines to resonate and sink in. (“And I want to touch you like the seed touches the soil / I want to hold you like the milk holds the spoil.”)

With each artist playing just 3-4 songs, no single set had time to get old–especially since they varied so much in genre and approach. Following Lady Lamb the Beekeeper’s harkening performance, our spirits were lifted once again by The Grand Nationals, whose lively alt-country set soon had the crowd clapping and tapping along.

For a series that hinges on a no-talking rule, the mood was friendly and open. Immediately upon walking into the lobby of the apartment complex, I was given a warm welcome by Jodie herself who quickly embraced me instead of accepting my outstretched hand. Seeing my confusion, Riley, the Sofar intern laughed and later told me, “Jodie’s really one of the reasons it’s fun. Every single person who walks in feel like they instantly belong here, and that’s why it works so well.”

To find out about the next Sofar Sounds show, simply sign up for the mailing list. Though Jodie wouldn’t reveal what artists she has lined up for upcoming NY/Brooklyn-based shows (she likes to keep both the music and the location a surprise until the last minute), the dates have been set, with the next few scheduled for April 8, May 9, and June 3.