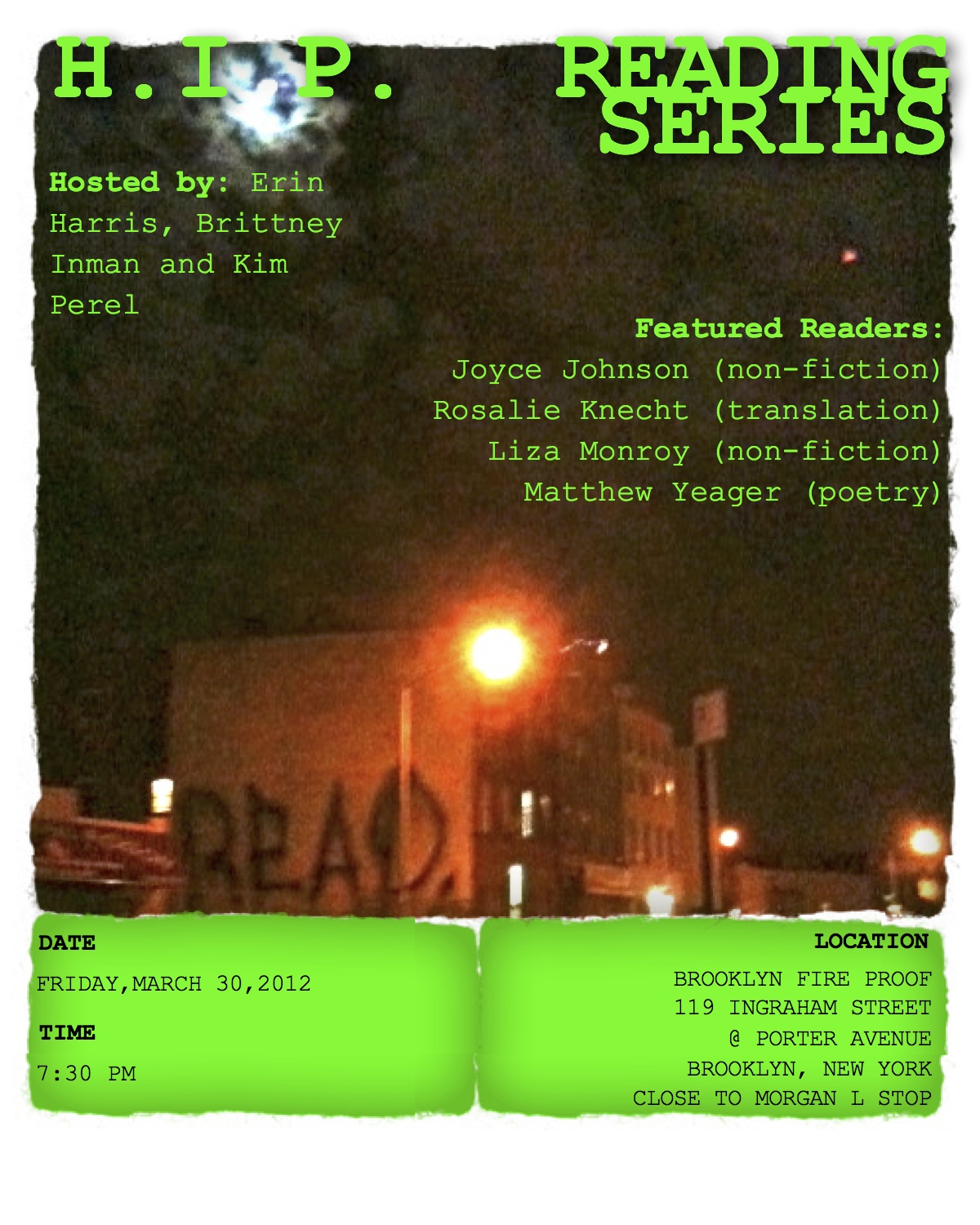 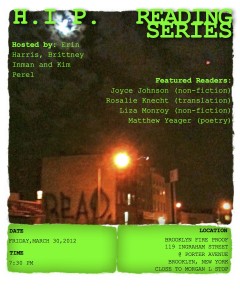 We listed a few readings on the Tip Sheet this week, but forgot to mention a cool new series that’s debuting tomorrow night, March 30 at 7:30pm at Brooklyn Fire Proof (119 Ingraham Street, in the alley between Knickerbocker and Porter). It’s called the H.I.P. Reading Series, which stands for the last-name initials of its curators: Erin Harris, a literary agent at the Irene Skolnick Literary Agency; Brittney Inman of Open Road Media; and Kim Perel, a literary agent at Wendy Sherman Associates. All graduated from the New School’s MFA program in Creative Writing and are now “dedicated to promoting emerging and established literary talent.” The author who caught my eye on their lineup is Joyce Johnson. She’s best known for Minor Characters, a memoir of her romance with Jack Kerouac and being a woman within the Beat circle in 1950s. She also wrote a great, now out-of-print book, In the Night Cafe, a novel that draws heavily from her literary life. More recently, she’s written a biography of Kerouac titled The Voice is All: The Lonely Victory of Jack Kerouac, which Viking will publish in the fall. Also on the bill: Rosalie Knecht, reading from her translation of Cesar Aira’s novel The Seamstress and the Wind; Liza Monroy, author of the novel Mexican High; poet Matthew Yeager; and Gigantic founding editor James Yeh. Here’s the facebook invite.

And here are a few other cool events coming up this weekend and beyond:

The Etsy Success Symposium is tomorrow, but if you can’t make it, you can watch the seminars online.

Mister Saturday Night is teaming up again with Spank (“an underground, mostly gay art zine and loft party”) for a dance party on Saturday called New York! Just Like I Pictured It. Tickets are available online only, here.

And attention developers and designers: Brooklyn Beta is hosting an incubator called “Summer Camp.” You should sign up for their list to get the first word when applications go live–you could get a $25,000 shot in the arm, plus 12 weeks of mentorship/support, for your next-big-thing.