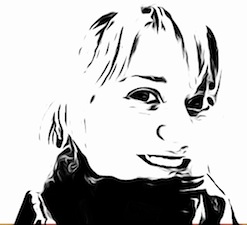 Dear Dot is at the ready for all your problems, including fetid fridges, hoarder tendencies and love trouble.

Once every month we like to take a look back on the blog and send some of its highlights straight to your inbox. Here are our favorites from March, which was really in like a lamb and out like a lion this year.

Whenever you start an advice column you worry a bit whether or not anyone will send in questions, and if they do, whether they’ll be interesting enough. Whoa nelly, Brooklyn you delivered. In her first column yesterday Dear Dot helped a reader face her refrigerator, which she hadn’t opened since her electricity was turned off for several weeks, with the fridge full of food. She was actually considering buying a new one and having the old one hauled away, unopened forever, before Dot stepped in. It was a doozy of guilt, avoidance and downright grossness. Next week, Dot will address a tale of woe from the daughter of a hoarder.

Colleen Kane’s latest Brooklyn 2.0 column, I Walk the Mile, struck a chord with every Brooklynite who has wondered, “How long can I really live here, if I work like a dog and still can’t afford to live like a normal person does almost anywhere else in this country?” If you haven’t yet read it, we guarantee you’ll find at least one small piece of yourself in it.

After previewing readings, exhibits, and performances for years in our weekly Tip Sheet, we’re finally posting book, art, theater and concert reviews, too. In his latest Booklyn column, Michael Sauter gives us his (glowing) assessment of Lauren Groff’s new book Arcadia, while Jack Palmer and events editor Casey Acierno (aka Lit Lovers) are reporting back on all the great readings in Brooklyn, starting with Craig Taylor’s book party for Londoners. Sara Christoph recently reviewed the Charles Atlas show at Luhring Augustine’s new Bushwick gallery and she checked out the major exhibition of Keith Haring’s early years  at the Brooklyn Museum. Rachel Kowal scoped out one of the coolest under-the-radar concert series in the city, Sofar Sounds. And later this afternoon we’ll have a review of St. Ann’s magical show, Elephant Room. 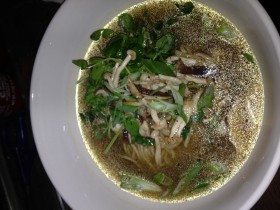 The veggie ramen at No Name Bar is super fragrant, almost like a pho broth (minus the animal bits).

If you just added the bands that music writer David Chiu talks to for his column, Keep An Ear On, to your iTunes or Spotify each week, you’d have a pretty comprehensive indie playlist before long. This month he spoke with Sophia Knapp, Jennifer O’Connor and We Are Augustines, and look for his interview with Clarence Bucaro later today. We’ve also got a great new mp3 in our BB Songs series from Hilly Eye, who also shared a recipe for Lemon Blueberry Pie with Laura Leebove of Eating the Beats.

In food news, we broke the story that No Name Bar in Greenpoint opened a noodle nook in the downstairs with Diner alum Lindsay Salminen at the helm. And, Brendan Spiegel explored pastrami sandwiches, visited The Bedford and made a certain variety of internet troll exceedingly happy with his column about chocolate whiskey, distilled in Brooklyn. Today, he checks out Celestino, Saraghina’s seafood-y cousin in Bed-Stuy.

And, in his column The Freelance Life, Jon Reiss offered twitter tips for and from writers, including Jeff Newelt (@jahfury) and David Gutowski (@largeheartedboy). It’s a must-read for anyone who wants to avoid digital douchery.