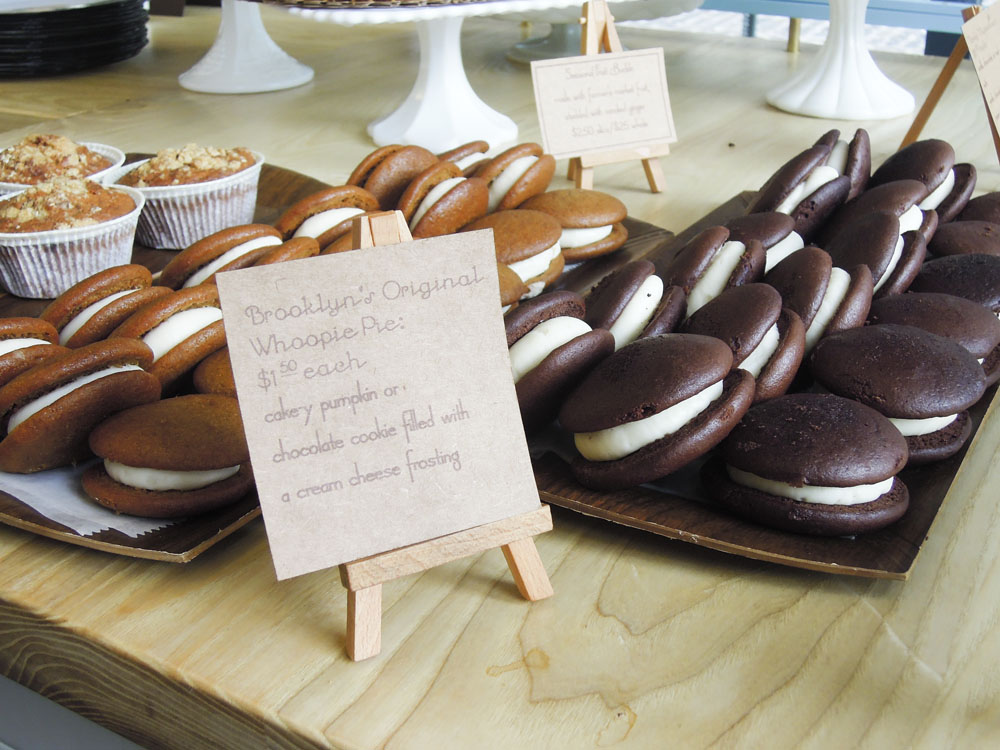 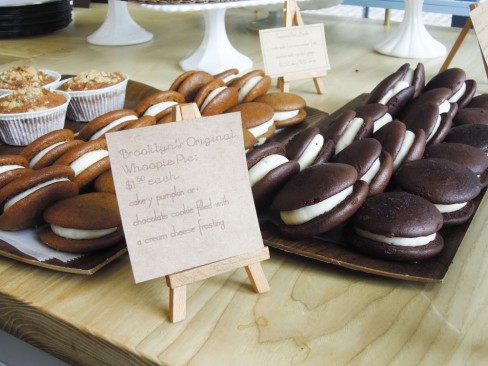 Pumpkin and chocolate whoppie pies sit at the ready.

On a recent weekend morning, I woke up with a startling enthusiasm and sense of urgency to my day. The cold(ish), dark days of winter had made it difficult to get going on mornings of lethargy, but as we know, the weather has been nearly perfect this March–for better or for worse–so I welcomed that old familiar feeling of excitement on a sunny day off.

I’d been wanting to check out the second location for Dawn Casale and David Crofton’s One Girl Cookies, which opened in early February, so I hopped on my bike and headed south for an early morning trip to DUMBO. The neighborhood pockets of new scenery, and the ever-growing list of new shops, cafés and restaurants to try, make Brooklyn a perpetually great place to explore, even when you live and work here like I do. DUMBO always yields some new and distinctive delight when I visit, and after knowing and loving the flagship OGC store, the new location was a great reason to step away from my normal cafe stops.

Sitting on the corner of Water and Main, OGC’s new 1,400 square-foot-spot is refreshingly spacious. The lofted ceilings are high, and so are the windows, which welcome in a whole lot of natural light. This goes well with the soft colors on the walls. The back wall is occupied by a mural from artist, Aaron Meshon, which also ties in the lightness of the shop.

There’s ample room to tinker away on a laptop, and plenty of space for the many parents, wheeling strollers in and out. The glass case displays a number of bite-sized cookies and whoopie pies. The small treats have an elegance to them and play into the aesthetics of the cafe as a whole, which is clean and uncomplicated.

The counter/barista station stands alone in the middle of the room, which allows counter seating around the back and tables behind that, while up front are several bar stools that line the window that faces Main Street. This is where I settled in with a bowl of their Rise n’ Shine granola and yogurt, along with a delicious americano. Contentment.

Casale, began baking in her apartment kitchen, during off hours from her job at Barneys New York. Motivated by memories of her grandmother’s kitchen and time happily spent preparing food, she soon became immersed in flour, sugar and butter.

Initially searching for a roommate, Casale met David Crofton who also happened to be taking night classes to become a pastry chef. Opting to work together over living together, Crofton and Casale began their journey in 2000. They opened their first brick and mortar location in Cobble Hill in 2006 and today, they’re a husband-and-wife power couple with two shops and a recipe book published by Random House that was released earlier this year. Yep, they give away their baking secrets, if you want to try your hand at a chocolate or pumpkin whoopie pie. (We also have their red velvet cake and oatmeal spice cookies recipes up on BB.)

If you live in DUMBO, a trip here is a given, and if you don’t live in the neighborhood and haven’t visited for awhile, make the trip and get some coffee and cookies to go along with a stroll along the waterfront.