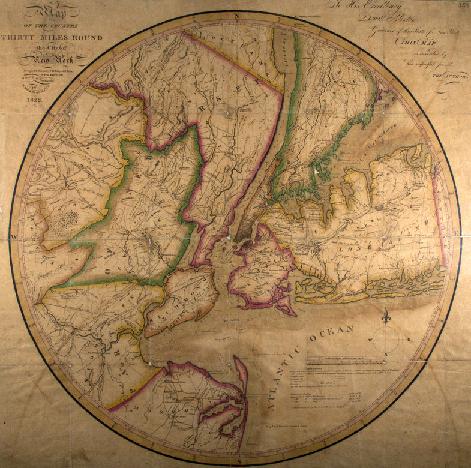 If you’re not on the Brooklyn Historical Society’s mailing list, you should really sign up. Their emails always include cool maps and photos from their archives. Just another awesome resource in our borough. Here’s the info the provided on the map above, which just showed up in my inbox:

This month’s featured map dates from 1828 and features the “country thirty miles round the city of New York,” including all five boroughs as well as portions of New Jersey, Long Island, and Connecticut. Drawn by J.H. Eddy of New York, this map is a new edition with edits by William Hooker and E. Blunt. While the map shows traditional elements such as roads, topography, and names of landowners (including the Lefferts, Cortelyou, and Vanderveer families in Brooklyn), it also shows more unusual things like taverns. The map appears to have been dedicated to Dewitt Clinton, Governor of New York, who died the same year the map was published.

Click here to see detail of the Brooklyn section of the map.

Interested in seeing more maps? You can view the BHS map collection anytime during the library’s open hours, Wed.-Fri., from 1-5 p.m. No appointment is necessary to view most maps. Our cataloged maps can be searched through BobCat and our map inventories through Emma.