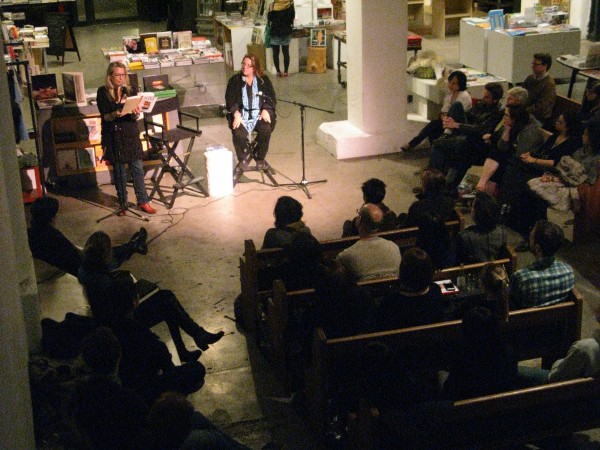 A rapt, but surprisingly not packed crowd at powerHouse Arena last Tuesday for the Cheryl Stayed (left) and Pam Houston reading

Considering the feverish excitement that has greeted Cheryl Strayed’s new book Wild: From Lost to Found on the Pacific Crest Trail, I was happy when I arrived at powerHouse last Tuesday not to find a line around the block. Perhaps the event at Manhattan’s Housing Works Bookstore the previous night had siphoned away attendees, or perhaps some Brooklynites didn’t share Cheryl Strayed’s sheer ruggedness–Wild is a memoir of an eleven-hundred-mile solo hike along the Pacific Crest Trail, or PCT–and had hurried home from the surprisingly cold weather.

Cheryl Strayed wasn’t the only attraction–her good friend Pam Houston joined her for an evening of stories from two awesomely strong women who, frankly, made me feel like a complete wimp. Cheryl had been a fan of Pam Houston’s writing since college, when she published Cowboys Are My Weakness. When they first met, Strayed was overcome with 48 hours of fangirl-ish excitement and was unable to string a sentence together. By the evening’s reading, a few years later, the relationship had matured into a great double act and obvious mutual appreciation.

After the briefest of introductions, Pam Houston read first, and for the uninitiated revealed a razor-sharp wit. The genesis of her latest book, Contents May Have Shifted, came from another book reading, at the Wisconsin Book Festival, where she was asked to read a piece of untested material. That brief short story set in Wisconsin grew to 144 stories, each a snapshot of a place and time.

Twelve of these stories take place on planes, including the first reading, a darkly comic tale of a crash-landing in Iceland, with an overly literary pilot. Then we were transported to Laos, and an incident involving eating a bacterial wipe. In Tucson, Arizona we met a massage therapist who does not read poetry, but “lives poetry.” My favorite story involved a trip to Milwaukee, a lunch at a geriatric country club, and a suicidal squirrel.

Since she was unmasked as the writer of The Rumpus’ Dear Sugar column, Cheryl Strayed has been riding a wave of publicity, and the excitement in the audience was palpable as she stood to speak. She read from day eight of her trek, when she was desperately hungry after filling her stove with the wrong gas. She was all alone, “starring in a science fiction movie.” Quickly it became apparent why the book brought New York Times reviewer Dwight Garner to tears. Both of these authors “write where it hurts” and Strayed’s writing is so emotionally raw that it was impossible not to be rapt as she spoke.

After they finished reading, Cheryl and Pam asked the audience for questions. Nobody raised their hand. With the characteristic ballsiness that makes WiId such an arresting memoir, Strayed launched into a revealing account of lipstick shopping with her fellow speaker, whose usual makeup routine involved pleading with a stranger to lend her lipstick at the last possible moment. It was a challenge: If she could reveal her personal story on stage in front of us, we could ask them a few simple questions. Slowly people started raising their hands, and soon the gratitude flowed forth freely to these two inspiring writers.

Leave a Reply to Rosemary