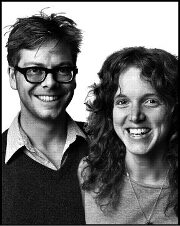 Imagine going into the doctor’s office for a check-up because you’ve been feeling a little run down, only to be admitted to the hospital immediately because of an infection in your heart. Then, in a complication, suffering an aneurysm leading to brain surgery and then open heart surgery to repair a wrecked valve, in quick succession. After close to a month in the hospital, not working, with medical bills mounting, you’re able to go home, but you’re still not quite back on your feet, physically or financially.

That’s pretty describes Jeff Hansen’s winter. Hansen, and his wife Siobhan Lowe moved to Chicago a few years ago, but it’s their community in Brooklyn that has rallied to offer support and help ease their financial strain. Between them, Hansen and Lowe have worked for pretty much every bar and restaurant you’d ever want to go to in North Brooklyn, as well as in the art and design world, and the auction their generous friends have set up here reflects that. Bid on a booze-y night of bowling and drinking at Gutter, Shayz Lounge and No Name Bar. Or, a dinner for two at Diner where Hansen was behind the bar for many moons. There’s a Frenet Branca bike up for auction, as well as a picnic for six from Pies ‘n’ Thighs. Oh, and a super rare, hard-to-place-a-value on private tour of the Frick Collection.

As the Supreme Court debates the constitutionality of President Obama’s health care plan, remember, many of us, even with health insurance, are once bad illness away from financial disaster, and we’re left with our community as a safety net–lucky to be part of the Brooklyn community in such a time.