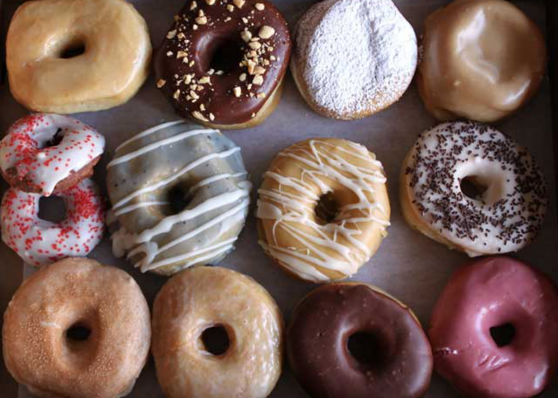 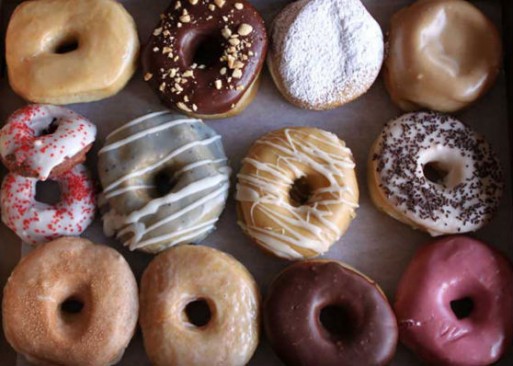 A rainbow-hued selection of a few of Dun-Well’s more than 40 flavors. Photo: Dun-Well

Take one in a to-go bag from Peter Pan; buy a dozen from Mike’s Donuts & Coffee; fill a box at Dough for your coworkers; or have one with a cup of coffee at Dun-Well Donuts, there’s a fresh doughnut renaissance happening in Brooklyn. The borough plays a big part in New York City’s rich doughnut history–which you can learn all about in a new exhibit at City Reliquary. But if you’re looking less for doughnut facts and more for an actual place to pick up few today, here are a some new and delicious faces, as well as some classic spots, around Brooklyn.

When it comes to classic Brooklyn doughnut shops, Peter Pan in Greenpoint, deservedly, gets a lot of love. But it’s not the only old-school spot worth checking out. Mike’s Donuts & Coffee has passed the test of time as a premiere doughnut shop in Bay Ridge. Located at 6822 5th Avenue, everyone from the cast of The Sopranos to Rachael Ray to Edible Brooklyn have raved about their homemade doughnuts.

Mike’s was started by Mike Neamonitis in 1976, when he arrived in Brooklyn from Greece, not knowing a word of English. With his wife and son, he created the business, making fresh donuts twice a day. Even as the company expanded, Neamonitis kept the shop a family affair.

“Doughnuts used to be an older-crowd type of thing,” said John, Mike’s son-in-law, who joined the company full-time in 1997. “Now, it’s an everyone type of thing. Glazed, jelly and cinnamon donuts are the greatest selling but we do a lot of wholesales to restaurants in the area. Dunkin Donuts is our competitor across the street. But while they sell their donuts at $9 or $10 a dozen, ours are $6 a dozen. That’s why people come to us.” Mike’s Donuts & Coffee closes only on Christmas and New Year’s Day and is open daily from 4am to 6 or 7pm.

In Sheepshead Bay, Shaikh’s Place serves up almost 50 different varieties of the deep-fried dessert food. Everything from the classic glazed doughnut to ones with coconut flakes, which is how they became better known as The Doughnut Shoppe. Shaikh’s is open 24/7 and makes fresh donuts night and day. The shoppe itself is a throw back from a bygone era–soda fountain machine included–and its prices are two–a glazed donut is only going to cost you 70 cents. You can find Shaikh’s at 1503 Ave. U (between E. 15th & E. 16th sts.).

Newer additions to Brooklyn’s donut legacy include Dough, which is located on the corner of Franklin and Lafeyette avenues on the Bed-Stuy/Clinton Hill border, as well as in the pastry cases of several local coffee shops, including Brooklyn Roasting Company and Bitter Sweet, and at the Brooklyn Flea on weekends. Dough’s flavors have inspired strong loyalty among fans. “Dough definitely makes me feel like I want to marry their doughnuts,” said Jackie Balzer, a Clinton Hill resident, who was picking up a few at Dough’s Smorgasburg spot last fall. “My favorite doughnut is the lemon poppy seed doughnut because I’m pretty sure it has all your favorite illegal drugs in it.”

Despite, or perhaps because of the wide selection of flavors, no single doughnut has emerged as a clear winner (though here at BB we’re partial to the dulce de leche). “All our donuts are popular,” said Chris, a server at Dough. “Not one over the other.” He did weigh in on his own preference, though. “My favorite doughnut is also the lemon poppy seed. Doughnuts are very popular in Brooklyn.” Dough’s rings of goodness are also available at Gimme Coffee, though they seem to sell out quickly.

Located at the intersection of Bushwick and Montrose aves., Dun-Well Doughnuts is a quaint, classic, wooden, coffeehouse-looking spot. “Our Mission is to be the premiere vegan doughnut shop on planet Earth and reverently carry on the tradition of doughnut making in a manner that is both innovative and ethical,” is written on a small chalkboard right underneath the main counter. The shop got its start as a food craving when Christopher Hollowell (the “Well” in Dun-Well) called up his buddy Dan Dunbar (the “Dun”) after having watched a Simpson’s anniversary episode in which doughnuts played a starring role. Christopher and Dan agreed to make it their quest to create an amazing doughnut and open NYC’s first all-vegan doughnut shop.

There are about 40 flavors of donuts to choose including lemon poppy seed, maple blueberry, Mexican chocolate, rum raisin, earl gray tea and almondine. “I brought home a bunch of doughnuts for my girlfriend one day in a brown bag,”  said Nicholas Cuomo, a Williamsburg resident who was standing outside Dun-Well with bag of doughnuts in hand on a recent morning. “My favorite was definitely the Mexican Chocolate.” Dun-Well also serves Brooklyn egg creams, local Italian sodas and freshly brewed coffee from Brooklyn Roasting Company.

As Homer himself would say, “Mmmmm, doughnuts.”