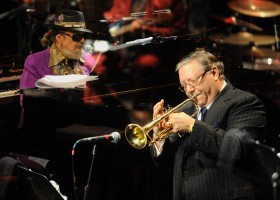 Mardi Gras might have been over a month ago but that’s not stopping BAM from having a Big Easy moment. Right now, the music academy is giving a nod to “Nu Awlins” through a series of musical and cinematic events celebrating the Crescent City. The series kicked off last week at Dr. John: Inside Out, which featured the New Orleans native known for bewitching audiences with his own form of jazz voodoo as he and a slew of fellow musicians paid tribute to Louis Armstrong in a concert that had us all second lining in our seats.

Dr. John doesn’t actually have a medical degree – you probably already knew this – but he could certainly cure an affliction with the way he mixes musical genres from blues to rock to jazz and everything in between. His real name is Mac Rebennack, and he’s got all the hallmarks of a musical legend like induction into the  Rock and Roll Hall of Fame and multiple Grammy awards; however, the thing that had me digging my winter coat back out of the closet and heading to BAM’s Howard Gilman Opera House despite the drop in temperature last Thursday night had less to with Dr. John’s musical prowess and more to do with the fact that simply put, the man is cool.

He’s one of the few musicians to come out of the 1950’s jazz era with his swing and swagger still in tact having not attempted to change too much with the times. If you can’t make it to New Orleans, seeing Dr. John perform is the next best thing to being on Bourbon Street. He seems to be the city personified, or at least that’s what I’d come to believe having listened to his music and seen his guest appearance on the television series Treme. My assumptions stood correct as he sauntered on stage last Thursday night, for the first of a three-evening engagement in the opera house. Ornate is the only way to describe Dr. John, who was wearing an electric purple suit and leaning on a walking stick that appeared to be adorned with leather tassels and pheasant feathers from my seat in the mezzanine. As he sat down at a black piano in the center of the stage surrounded by his backup band, I realized, he is the only person, aside from Stevie Wonder, who can get away with wearing sunglasses inside.

Noted musicians, including the singing quartet Blind Boys of Alabama, Spanish spoken word artist Telmary Diaz and Rickie Lee Jones paid vocal tribute to Louis Armstrong, but it wouldn’t have been a celebration of Satchmo without a trumpet player or two in attendance. Trumpet soloists at the show included James Andrews and Arturo Sandoval, who was hitting notes so high only dogs could hear them, as well as Kermit Ruffins, who like Dr. John is a native of New Orleans’ music scene and appeared on Treme. Dr. John and his entourage played Armstrong standards like “Beautiful World” and “When You’re Smiling,” as well as taking time to just jam in true jazz style.

The concert was so good, had I not been catching a train to South Carolina the next day, I would have gone back for an encore. Sadly the curtains closed on March 31 before I returned; however, I might just have to go back for a follow-up visit to Dr. John this weekend–he’s playing at BAM again with Dan Auerbach, the singer and guitarist of The Black Keys. The two collaborated on an album titled Locked Down, which they’ll perform live.