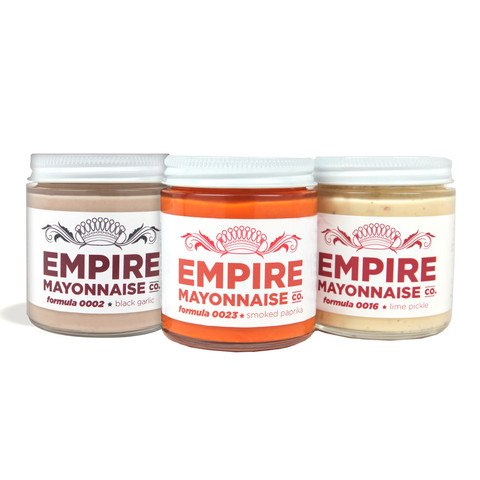 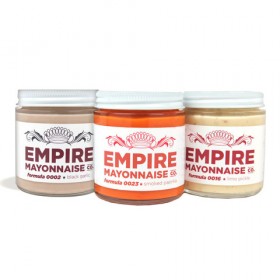 Yes, everybody on the Internet, there is a mayonnaise shoppe in Brooklyn now. If this hurts anything other than your cholesterol level, if instead this taxes your cynical sensibilities , then you are in the wrong place, and please step aside to make room for the people who appreciate awesome things.

I have documented qualms with aspects of modern life in Brooklyn, but for me the best part of living in the Downtown/ Boerum Hill area is what’s happening with food. Sure, this increased focus on locally crafted products, quality grown ingredients, and culinary one-upsmanship is going on elsewhere, but we have it all, and what isn’t here already will get here.

The excellent New York Magazine recently ran an article on “foodie-ism as youth culture,”  asking when young people started spending 25% of their paycheck on pickled lamb’s tongues. Over the course of a week, the 27-year-old Brooklyn-based subject of the feature basically ate the world: oxtail noodles, savory scone, crab toast with lemon aioli, mixed bean drink, queso fundido, bun noodles, fried pickles, pretzel croissant, and on and on. It was all photographed to see in the article: our city’s embarrassment of riches laid out in full color.

And in this week’s issue, “The Twee Party” examines the growth of Brooklyn food-crafters. It included the phrase “eating Brooklynishly” and described Brooklyn as a “garden of artisanal delights.” There seemed to be an undercurrent that even coverage of a young person eating her way around the city and especially writing about the Brooklyn food-making contingent was baiting the inevitable complaints that came.

You guys: We are spoiled! And it’s great. A recent dinner at the postage-stamp-sized front table in Mile End’s window with my husband crystallized why we are here. I had cod falafel with a spicy cilantro sauce, and commandeered Tom’s slaw and house-made pickles per usual. We shared the poutine. Mile End’s Jewish deli food by way of Montreal seems simple but is so good it makes me slow down, do a few heavy bats of the eyelids, and see everything in a contented haze.This place is two blocks from home. “Why don’t we eat here any time we can’t decide where to eat?” we said. (Well, because the tiny place is often packed.)

I call this the “fuck yeah” factor. I have a choice of places to eat, many within walking distance of my apartment, that make me curse its praises.

And with a big enough budget* you could easily eat a day of only Brooklyn-grown and -produced products. While no one has yet figured out a way to pasture beef on Brooklyn rooftops (the cow would refuse to come back down the stairs when her time was up), you could get a cow that grazed near to the flying range of the bees that gave us the honey that was drizzled over breakfast, and that cow could be butchered at The Meat Hook. I just hope no one around here gets into foraging for squab because if they don’t die of disease they will die at the hand of my neighborhood pigeon lady.

*a theme of everything

Eateries popular elsewhere come to us in Brooklyn, not just over the river from Manhattan (lately: Shake Shack, Momofuku Milk, Vanessa’s Dumpling House) but from other cities–Pok Pok from Portland (opening tomorrow), Alamo Drafthouse from Austin–OK, in the case of the latter, it’s coming to the Upper West Side, but we’re probably next. Anyway, we have Nitehawks.

As for joints dating to pre-Brooklandia times, I don’t even want to publicize where to get the best two-meals-worth of an eggplant parm sandwich, but you can also pick up a ball of their house-made mozz while there. Down by Brooklyn Bridge Park isa  pizza place so favored by Sinatra that he had their pies flown to him on tour. We have some sort of semi-sold-out food festival coming next month to Prospect Park (where they’ll serve New Orleans’ Jazz Fest’s Crawfish Monica– my worlds collide). And when I don’t feel like moving off the couch, there’s delivery from dozens of places.

I’m gushing because I was deprived of this cornucopia of choices when Tom and I moved South for three years, and prior to that in my previous Brooklyn life, my diet was quite limited though I didn’t admit it.

But now back in a place where competition keeps ‘em sharp, I won’t soon forget that in the state capitol of Louisiana, there was far less diversity and mediocrity was not weeded out. (Behold this incomplete Yelp list of places I ate multiple times in Baton Rouge that I wouldn’t have if we weren’t living there for three years.)

** In fairness, a food truck scene has since emerged, setting up once a week two blocks from our old house. Councilman “Smokie” Bourgeois (no joke) who not coincidentally owns an eatery, is trying to throw a roadblock in front of this positive development–because Louisiana, that’s why.

I know it’s the Internet and New Yorkers like to grouse, but I hope those inclined to criticize who live here and like to eat realize how good Brooklyn has it.

People who are rich avoid saying so. People who are foodies hate the term. People who are hipsters never admit they’re hipsters. Well, gentrifiers of Brooklyn, by definition you must deny the following truth bomb, but a lot of us are hitting the trifecta that dare not speak its own name: We are foodie hipsters and we are filthy stinking rich in food. I am okay with that.