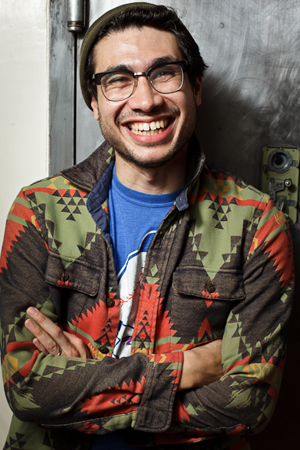 Every month or so, Brooklyn Based unveils an exclusive song by a Brooklyn band, recorded at Nadim Issa’s state-of-the-art recording studio in Gowanus, Let ‘Em In Music. Then, Laura Leebove of the music-inspired food blog Eating the Beats creates a recipe with—or inspired by—the featured artist. This month’s mp3 is Gabriel & the Hounds performing Kate Bush’s “Hounds of Love,” and the recipe is Eggs in Clouds, cooked with Gabe Levine.

Gabe Levine of Gabriel & the Hounds

“She’s a special one,” Gabe Levine says of Kate Bush. Special enough that his latest musical endeavor, a solo project as Gabriel & the Hounds, is named for the British singer/songwriter’s 1985 masterpiece Hounds of Love. Levine, who also fronts the band Takka Takka, was introduced to Bush’s music when he was a teenager and he’s been obsessed ever since. “I feel like all the music from that time period has always been around—Peter Gabriel, The Beatles, Cat Stevens. I can’t remember what my life was like before I knew that.”

It’s no surprise, then, that Levine chose to cover Bush’s “Hounds of Love” for BB Songs. “I figured, if I couldn’t sing this song then I didn’t deserve to use the ‘Hounds’ name,” he says. Levine’s version—recorded with a group of musicians who just happened to be hanging around the studio that day—is a bit slowed down from Bush’s original. Levine says it was a tough song to cover because hers is so unique. “Really only Kate Bush of a certain era can sing it properly,” he says. “I tried to keep the intention of the original but doing it in a way that sat well with my voice and approach.” It starts with clean guitar and hollow drums, then swells into the chorus with suspended cymbal and synths.

Levine’s debut this February as Gabriel & the Hounds, Kiss Full of Teeth, has hints of Bush’s music, mostly in its dramatic string arrangements and the overall grandiosity of it. (The Hounds are a rotating cast, but the record features members of The National, My Brightest Diamond, Clap Your Hands Say Yeah and others.) After the songs were written on guitar and synthesizers, arranger Michael Atkinson magically turned Levine’s vision—with directions like “Make this sound like a Disney movie” and “I want this to sound like Philip Glass on steroids”—into parts for an orchestra. “It was kinda like having [my own] John Williams,” he says. The orchestral presence is massive, at times reminiscent of acts like Grizzly Bear and Shearwater. There’s a waltzing woodwind interlude in “Lovely Thief,” a buildup of frantic strings in “When We Die in South America,” and horns and plucked string arpeggios in “Photos of the End.”

The themes that run through Kiss Full of Teeth are often fear, loneliness and uncertainty: In “What Good Would That Do?” he sings, “I feel misunderstood by everyone, and you are one of them” and “The World Unfolds” ends with, “When will anger be beneath me?” The bleak lyrics are a parallel to Hounds of Love that came up during our mostly-failed cooking session, when Levine decided maybe it was better that our dish didn’t turn out as planned: “I think Kate Bush would appreciate it,” he said. “All of her songs are about things falling apart, anyway.”