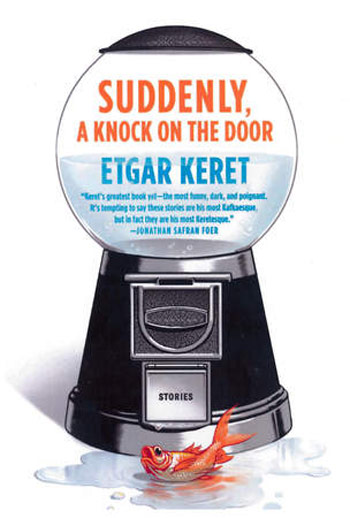 As I scanned the advance blurbs praising Israeli author Etgar Keret’s new short story collection, Suddenly, a Knock on the Door, I kept seeing the same name invoked: Kafka. Everybody thinks this guy’s writing is “Kafkaesque.” And I get it: Both writers go to some spectacularly absurdist extremes to portray the alienation of the individual in an indifferently oppressive modern world. So, yeah, in very broad terms, Kafkaesque. But looking a little closer? I see, well, a whole world of difference. And not just because Kafka lived and wrote about a century before Keret.

It’s a matter of sensibility: Where Kafka’s absurdism is nothing if not big and bleak and allegorical–think The Trial’s Josef K., arrested and tried for a crime that is never named, or Gregor Samsa of The Metamorphosis, the self-loathing traveling salesman who turns into a giant cockroach–Keret’s brand of bent reality is decidedly less weighty. Strangers hold a writer at gunpoint, demanding that he make up a story to tell them. A young woman pulls a zipper under her lover’s tongue and releases a completely different man hidden inside him. A convicted killer-for-hire receives a lethal injection and goes to Hell, where he will spend eternity as Winnie the Pooh. These are not exceptions in Keret’s collection. These are the norm. And if you want to call that Kafkaesque, I’m not going to argue. I mean, we’re talking Franz Kafka here. Who am I to deny Etgar Keret such a compliment?

At the same time, can I just go out on a limb here and suggest that Keret is a more invigorating and entertaining read? He’s got a lighter touch, a defter way with irony and–shocker here–a more antic sense of humor. (Kafka it should be noted was not humorless; it was just that his humor was so, you know, dour.) Keret also has a slightly rosier outlook, in a cynical sort of way. Whereas Kafka’s poor bastards tend to represent the human condition as ultimately slammed, squashed and sucked dry, Keret’s motley assortment of protagonists are still in there, fighting for survival. Which isn’t to suggest that that they aren’t sacrificing big chunks of their souls as they play dodge ball with life–as does the protagonist of “Teamwork,” a divorced dad afraid of losing his visitation rights, who coaches his young son to bash his own head against a wall, in a plot to frame the ex-wife’s mother and get her out of their lives.

Yes, in Keret’s world, the fight for survival is rarely brave or noble. But that’s okay, because he’s not expecting us to identify with that desperate father’s extreme solution. He’s just putting it out there, eliciting our surprise, and then our contemplation. It’s like he’s saying, “You get what this man is up against, right? This is how he deals with it. How would you?” Because it’s when Keret’s characters do something that catch us off guard–with their audaciousness, their inappropriateness, their total off-the-wallness–that these stories really make us stop and think. Stopping and thinking is a good thing. Stopping and thinking is what Ella, that young woman with the zippered lover under his tongue, does when, near the end of “Unzipping,”she discovers a zipper under her own tongue and ponders over whether to pull it. She’s wondering what kind of person she’ll find inside her. It makes her feel “very hopeful–but also a little worried…”

Not very far into this collection, you begin to approach each story with heightened anticipation, waiting to see what kind of looking glass Keret will lead us through next. And though, every so often, these forays come off like show-offy meta stunts, mostly they reward our investment of time. As they unfold in their unexpected ways, we are only too happy to puzzle over and wonder at each new flight of Keret’s fancy. I’m especially thinking of “Pudding,” in which strangers drag an utterly “average Joe” out of his apartment, throw him into a van and take him to what turns out to be the last place he wants to be: his parents’ apartment. And also: “Bad Karma,” about an insurance salesman who emerges from a coma (a suicidal jumper landed on him) and resumes his ordinary family-man life, only to find himself longing to return to the dream state of his unconsciousness.

And yet I must say that some of my favorite stories here are the ones that are virtually free of the absurdism, the strange behavior, the Twilight Zone plot twists–the ones in which the ironies are subtle and bittersweet, and the emotions all too recognizable. The ones that are going to stay with me the longest. One of those is “Big Blue Bus,” in which an overmatched father tries to coax his single-mindedly resistant son into going to kindergarten class. Another is “Surprise Party,” about three virtual strangers who wind up the only guests at a 50th birthday party for a man who never shows up. Still another is “Joseph,” which finds two men sitting at a café table, talking about the no-escape nothingness in their movie-business lives–when a suicide bomber walks in.
Okay, so that particular irony isn’t so subtle. But with“Joseph,” Keret demonstrates that he doesn’t need to get fantastical to capture life’s essential absurdity. Even brutal ground-level realism will get that done.

And then there is Keret at his most artfully subdued, in “Black and Blue,” in which a man and woman meet, months after a one-night stand that has left them both inexplicably haunted. He’s seeking forgiveness for having left her hanging after that night; she’s hoping against hope that he needs something more from her. What follows is a somewhat forlorn dinner, of takeout pizza, warm white wine and true feelings, rising to the surface. Some of them are expressed, others are not. After he’s gone, the woman reflects: “Some people fall out of the third floor of a building and end up with nothing more than a black-and-blue mark on their backside. While others take one wrong step on their way down the stairs and wind up with a cast. She and David were of the second kind.”

That doesn’t quite say it all about the philosophy that drives this dazzling grab-bag of fables, fantasies, monologues and snapshots. But you get the idea.

Etgar Keret will be at Amanda Stern’s Happy Ending Music & Reading Series at Joe’s Pub Wednesday, May 2 with musical guests Clare and the Reasons. Tickets are $15.